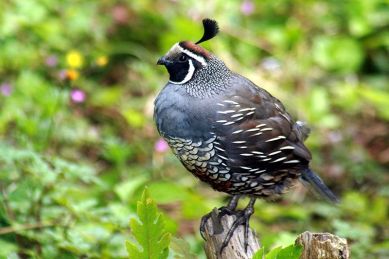 Partridges, which number 39, are part of the Phasiaidae family which has 155 species worldwide (only 16 in North America) that includes Chukar, Francolin, Quail, Pheasants, Junglefowl, Peafowl, and Peacocks. The Grouse and Wild Turkey are also related to them.

The Partridge is only mentioned twice in Scripture. In Jeremiah, the fact is that other birds put their eggs in the nest of a partridge and then expect the nesting bird to do all the work, sitting, feeding, and fledging the chicks.

I, the LORD, search the heart, I test the mind, Even to give every man according to his ways, According to the fruit of his doings. “As a partridge that broods but does not hatch, So is he who gets riches, but not by right; It will leave him in the midst of his days, And at his end he will be a fool.” (Jer 17:10-11)

We find the second reference to a partridge in I Samuel. David is being hunted by Saul.

So now, do not let my blood fall to the earth before the face of the LORD. For the king of Israel has come out to seek a flea, as when one hunts a partridge in the mountains.” (1Sa 26:20)

I promised to present the birds, not explain all the verses. I’ll leave that for our pastors.

Back to Birds of the Bible – Partridge Page

One thought on “Birds of the Bible – Partridge”