I returned home from Armidale NSW by road bringing back a friend’s car that had been left at the Gold Coast south of Brisbane because of the flooding. I took the opportunity to make a detour to Inskip Point – near Rainbow Beach and Fraser Island – a known haunt of the rare Black-breasted Buttonquail, see the female in first photo.

I found a pair relatively easily, though not before a few false alarms in the shape of some very young Australian Scrub-turkeys, as in the second photo, so young in fact that they were as small as the Buttonquails. 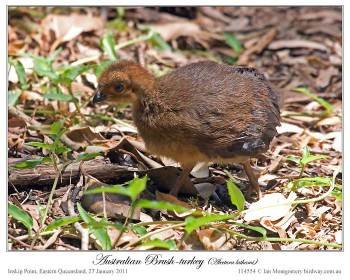 Buttonquails leave characteristic circular bare patches in leaf litter called ‘platelets’ and I had stopped to examine some of these when a female Black-breasted Buttonquail ambled across the path and walked right past me. At one stage she walked towards me and I don’t think she noticed my presence. Buttonquails, like certain other eclectic groups of birds including Phalaropes and Cassowaries, have reversed sex roles with the more colourful females courting the males and the males incubating and looking after the young, so I was pleased to see the female who has a black head and black breast with moon-shaped white spots on the sides, as in the third photo.

Buttonquails are not closely related to the true quails and are placed in their own family, the Turnicidae. The most obvious structural difference is the lack of a hind toe in Buttonquails, as you can see if you look carefully in the fourth photo and they are sometimes called ‘Hemipodes’, meaning half-foots. They feed on seed and invertebrates and the Black-breasted is particularly dependent on leaf litter and eats mainly invertebrates. They make the platelets by spinning around on one foot using the other to clear away the leaves; often they then reverse direction standing on the other foot so the size of the platelet matches the size of the bird. The Black-breasted is large by Buttonquail standards with the larger females being about 19cm/7.5in in length and the males 16.5cm/6.5in. I saw her drabber partner later but he didn’t want his photo taken.

There are about 16 species in total and are found in Africa, southern Spain, southern and southeastern Asia and Australia. Seven of these occur in Australia. The range of the Black-breasted is limited to coastal southeastern Queensland and northeastern NSW from Fraser Island to just north of Lismore. Its preferred habitat is open woodland and its population has suffered from habitat clearing and it is now classed as vulnerable.

Quails are mentioned in the Bible in four verses; Exodus 16:13, Numbers 11:31-32 and Psalm 105:40. Which kind of quail, it is not clear, but they were complaining about not having enough to eat and the LORD sent them Quail.

The people asked, and he brought quails, and satisfied them with the bread of heaven. (Psalms 105:40 KJV)

Birds of the Bible – Quail