Well, my apologies for a very belated bird of the week. Life in and around Townsville has largely returned to normal post-Yasi, except for for my broadband connection so I’ve borrowed a mobile modem from my neighbour. 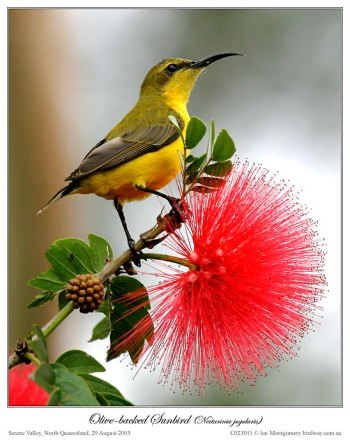 This week’s choice is the award for small bird cyclone survivor, jointly shared by around here by Red-backed Fairywren, Dusky Honeyeater and Olive-backed or Yellow-bellied Sunbird. The fairywren has been bird of the week before (July 2005), so I was going to choose the Dusky Honeyeater until I discovered that I have no record of the Sunbird being bird of the week before. That’s a potentially serious omission, so please forgive me if I’m mistaken: just nod sagely and put it down to old age and post-cyclone shock.

I suppose one shouldn’t be surprised at the Sunbird surviving cyclones as its range in Australia is restricted almost entirely to coastal tropical Queensland, extending just south of the Tropic of Capricorn to around Bundaberg. It also occurs in Torres Strait, New Guinea and southeast Asia but is regarded here as an iconic species and is immensely popular being very common around gardens, tame and often building its elegant hanging nest on verandahs. They feed mainly on the nectar of blossoms but will also take spiders.

The first two photos show the blue-chested male and yellow-breasted female respectively on Calliandra (Powder Puff) and were taken at the house that I rented when I first moved to Townsville. The third photo shows one of the local males perched in a Poinsiana tree near my current house. 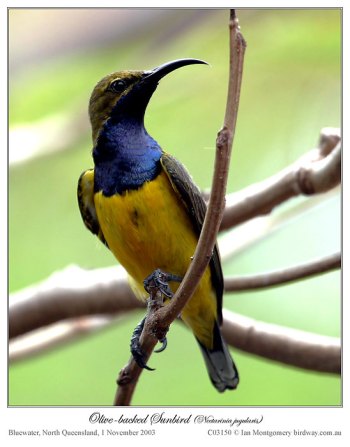 This species is the only Sunbird found in Australia but it belongs to a large family with more than 100 species of Sunbird in Asia and Africa and leading a lifestyle similar to that of the exclusively American and unrelated Hummingbirds. The Sunbirds are closely related to the Flowerpeckers – which include the Mistletoebird – and there is disagreement as to whether they constitute one or two families.

Other cyclone related news is that the Peaceful Dove that I rescued had an injured rather than broken wing, has recovered well in the company of the budgies next door and is ready to be returned to the wild. Food is now the main issue for survivors and many of you have naturally expressed concern for the Southern Cassowaries, just recovering from cyclone Larry. You can find out what the Queensland Government is doing . Sue and Phil Gregory tell me that the Cassowaries at Cassowary House in Kuranda near Cairns have survived well, so keep that in mind if you are visiting North Queensland and want somewhere lovely to stay: http://www.cassowary-house.com.au/ .

Like cyclone Larry, Bluewater has been visited by some unusual avian visitors post-Yasi. I’ll say more about them in the next email and some photos of a special one for bird of the week #400 which will go out shortly as a catch-up.

What a neat looking bird and your photography skills show through as usual, Ian. Not sure about the readers, but I enjoy seeing each of your Bird of the Week offerings.

The Sunbirds reside in the Nectariniidae Family of the Passeriformes Order. There are 136 of these beautiful Sunbirds which also include Double-collared Sunbirds and Spiderhunters.

Then I saw an angel standing in the sun; and he cried with a loud voice, saying to all the birds that fly in the midst of heaven, “Come and gather together for the supper of the great God, (Revelation 19:17 NKJV)

“The sunbirds and spiderhunters are a family, Nectariniidae, of very small passerine birds. The family is distributed throughout Africa, southern Asia and just reaches northern Australia. Most sunbirds feed largely on nectar, although they will also take insects, especially when feeding young. Fruit is also part of the diet of some species. Their flight is fast and direct on their short wings.

The sunbirds have counterparts in two very distantly related groups: the hummingbirds of the Americas and the honeyeaters of Australia. The resemblances are due to the similar nectar-feeding lifestyle. Some sunbird species can take nectar by hovering like a hummingbird, but usually perch to feed.

The family ranges in size from the 5-gram Black-bellied Sunbird to the Spectacled Spiderhunter, at about 45 grams. Like the hummingbirds, sunbirds are strongly sexually dimorphic, with the males usually brilliantly plumaged in metallic colours. In addition to this the tails of many species are longer in the males, and overall the males are larger. Sunbirds have long thin down-curved bills and brush-tipped tubular tongues, both adaptations to their nectar feeding. The spiderhunters, of the genus Arachnothera, are distinct in appearance from the other members of the family. They are typically larger than the other sunbirds, with drab brown plumage that is the same for both sexes and long down-curved beaks.

Species of sunbirds that live in high altitudes will enter torpor while roosting at night, lowering their body temperature and entering a state of low activity and responsiveness.” (Wikipedia)

For the LORD God is a sun and shield; The LORD will give grace and glory; No good thing will He withhold From those who walk uprightly. (Psalms 84:11 NKJV)