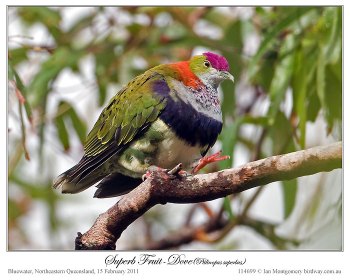 One of the tragedies of severe tropical cyclones is the damage to vegetation, particularly fruiting trees, and the resulting avian refugees, many battered and exhausted, fleeing far and wide in search of food. Since cyclone Yasi, many Superb and Wompoo Fruit-Doves and some Brown Cuckoo-doves have been moving through areas such as Bluewater and Townsville. This happened after cyclone Larry in 2006 when many of these refugees stayed around for months, but they are even more numerous this time round.

Superb Fruit-Doves are among the most spectacularly beautiful of rainforest birds in eastern Australia, but despite their bright colours are usually heard rather than seen. Their distinctive, repeated ‘whoop, whoop’ calls – with a rising inflection delivered at a regular rhythm and easily distinguished from the similar but accelerating ‘whp-whoo’ of the related and equally gorgeous Rose-crowned Fruit-Dove – are a very characteristic sound of northeastern rainforests. Hearing is no guarantee of seeing, however, and these shy birds usually remain invisible in the thick foliage of rainforest trees. So, it is strange to see these wonderful little doves (length of both species to 24cm/9.5in) sitting in full-view on trees in open tropical savanna left leafless by the cyclone, too tired to fly away when approached.

The first photo shows a male, the second the less-spectacular but still beautiful female photographed from the verandah of my house a week to ten days after the cyclone when this species was most numerous around here. The females have an indigo skull cap that, being on the back of the head, is often not visible but you can see it clearly in the bird in the third photo, taken in a battered but still fruiting tree at Dungeness where we lunched last Thursday, in a normally but no longer shady park near Lucinda on the coast east of Ingham, after doing the monthly wader survey. That area took quite a battering and the sand spit along which we used to walk to do the survey has largely been flattened and the sand dumped in the mud flat to its west.

The range of the Superb Fruit-Dove in Australia is the east coast from the tip of Cape York to south of Sydney. Its main breeding range is in tropical Queensland north of Prosperine on the Whitsunday Coast and it is relatively rare in New South Wales. It also occurs in New Guinea and eastern Indonesia and many Australian birds migrate to New Guinea in winter. Fruit-eating doves normally range widely in search of food, given the seasonal nature of its availability, so it is to be hoped that this ability serves them well in times such as this.

I’ve resumed work on the website still using the borrowed mobile modem and have at last finished updating all the next/previous family pointers of the Australian bird family thumbnail pages. This means that you can now view the website in a global context or an Australian one, depending on your focus. The global context – and the New World and Old World subsets – follows the taxonomic organization and sequence of Birdlife International both between and within families while the Australian one follows the organization and sequence of Christidis and Boles, 2008, the generally accepted authorities in Australia.

There are quite a few differences in the recognized families, the sequence of families and the order within families between the 2 schema, so I suggest that you stick to one or the other (at any one time) to avoid confusion. The Australian context is distinguished by green backgrounds for both arrows (to Australian thumbnails and to previous and next families) and for the pages of family thumbnails. I’ve documented differences in family structure on the family pages; have a look at this for a simple example: http://www.birdway.com.au/cacatuinae/index_aus.htm and this for a particularly divergent example: http://www.birdway.com.au/sylviidae/index_aus.htm .

Though ye have lien among the pots, yet shall ye be as the wings of a dove covered with silver, and her feathers with yellow gold. (Psalms 68:13 KJV)

This beautiful Superb Fruit-Dove or Fruit Dove, depending on whose list used, is in the Columbidae Family of the Columbiformes Order. There are 321 members of the family including the Doves, Fruit Doves, Collared Doves, Cuckoo-Doves, Wood Doves, Bronsewings, Ground and Quail Doves, Bleeding Hearts, plus all the different kinds of Pigeons.