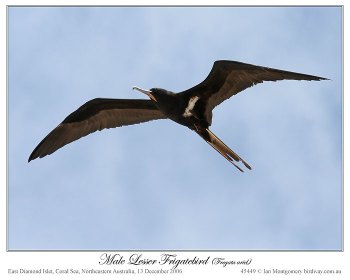 Ian’s Bird of the Week – Lesser Frigatebird ~ by Ian Montgomery

This is the third of the post-cyclone Yasi birds of the week. The first dealt with survival of small birds; the second with birds like fruit-doves that move after the cyclone in search of food. Another category of birds greatly affected by cyclones are seabirds, particularly those that spend much time on the wing and these often appear in places where they are not usually seen or get blown inland, sometimes over great distances.

The Lesser Frigatebird is common in oceanic waters of northern Australia and breeds in colonies both on the northern mainland and on cays and islands. Adult birds are normally sedentary, remaining in the vicinity of the colonies, though immature birds may travel widely over the oceans. Frigatebirds not normally seen in places like Townsville, distant from breeding colonies, except after cyclones and cyclone Yasi was no exception with both Great and Lesser Frigatebirds being recorded along the coast. I was surprised to see a pair of Lesser Frigatebirds near my place at Bluewater, 11km from the coast and the birds looked quite out of place soaring over the hills south of the house. 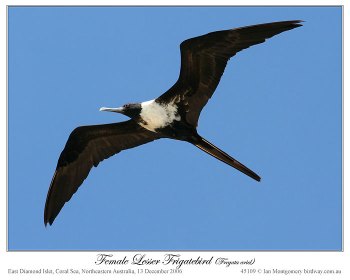 Lesser Frigatebirds are easily distinguished in all plumages from Great Frigatebirds by having white ‘armpits’ or spurs. The first photo shows a male bird, black except for these spurs and male Great Frigatebirds are entirely black. Male Frigatebirds have inflatable red throat pouches used to spectacular effect in displays (for example this male Magnificent Frigatebird in Ecuador: http://www.birdway.com.au/fregatidae/magnificent_frigatebird/source/magnif_frigatebird_27662.htm ). The second photo shows a female Lesser Frigatebird and the third an immature one.
Frigatebirds are huge. Even the Lesser, the smallest of the 5 global species, is 70-80cm/28-32in. in length with a wingspan of 1.8-1.9m/5.9-6.2 feet. They are very light for their size, having very light bones, and are adapted to soaring effortlessly in the trade winds where they are usually found. They are famous as pirates, forcing other seabirds, particularly boobies, to disgorge their prey ( http://www.birdway.com.au/fregatidae/greater_frigatebird/source/greater_frigatebird_39356.htm ), but they are also adept fishers in their own right, snatching flying fish in flight and other fish and cuttlefish from the surface of the water. They have tiny feet, useful only for perching in trees when nesting or roosting and quickly become water-logged if forced to land on water which they normally avoid. They will bathe and drink fresh water in flight ( http://www.birdway.com.au/fregatidae/greater_frigatebird/source/greater_frigatebird_40675.htm ). 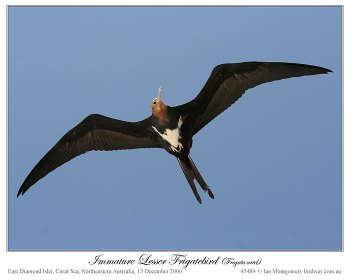 11km from the coast is nothing to a frigatebird and it is likely that cyclone-distributed frigatebirds can find their way home (like swifts, they often take advantage of storm fronts). Less fortunate perhaps was the Petrel recorded post-Yasi on the Atherton Tableland by Alan Gillanders, though the record for Yasi goes to a Bridled Tern rescued ‘in bad shape’ in Alice Springs by Chris Watson, probably as far away from the ocean as you can get in Australia.

The latest addition to the website is a taxonomic index of Australian birds ( http://www.birdway.com.au/aus_taxonomic.htm ), showing Orders and Families and with links to the 97 of 103 families of Australian birds represented on the website. The 6 unrepresented families are also shown but lack links. Some of these missing families are merely rare vagrants such as Northern Storm-Petrels and Leaf Warblers (the Arctic Warbler) or introductions like the Ostrich but others such as Penguins (there are only photos of African Penguins) are to be regretted and I hope to rectify this before the year is out. The other two – Scrub-birds and Sheathbills – are in the very hard baskets, and I can’t make any promises. If classification is your thing, this page is for you and you can find it under the grey navigation button ‘Indices to Australian Birds’ formerly singular. There are also instructions on the home page: http://www.birdway.com.au/index.htm#news .
Best wishes,
Ian
—
Ian Montgomery, Birdway Pty Ltd,
454 Forestry Road, Bluewater, Qld 4818
Phone: +61-7 4751 3115
Preferred Email: ian@birdway.com.au
Website: http://birdway.com.au

The birds of the air, And the fish of the sea That pass through the paths of the seas. O LORD, our Lord, How excellent is Your name in all the earth! (Psalms 8:8-9 NKJV)

The frigatebirds are a family, Fregatidae, of seabirds. There are five species in the single genus Fregata. They are also sometimes called Man of War birds or Pirate birds. Since they are related to the pelicans, the term “frigate pelican” is also a name applied to them. They have long wings, tails and bills and the males have a red gular pouch that is inflated during the breeding season to attract a mate. They are part of the Suliformes Order.

Frigatebirds are pelagic piscivores which obtain most of their food on the wing. A small amount of their diet is obtained by robbing other seabirds, a behavior that has given the family its name, and by snatching seabird chicks. Frigatebirds are seasonally monogamous, and nest colonially. A rough nest is constructed in low trees or on the ground on remote islands. A single egg[citation needed] is laid each breeding season. The duration of parental care in frigatebirds is the longest of any bird.

Frigatebirds are found over tropical oceans and ride warm updrafts. Therefore, they can often be spotted riding weather fronts and can signal changing weather patterns.

These birds do not swim and cannot walk well, and cannot take off from a flat surface. Having the largest wingspan to body weight ratio of any bird, they are essentially aerial, able to stay aloft for more than a week, landing only to roost or breed on trees or cliffs. (Wikipedia)

Dan and I had the privilege of see a Magnificent Frigatebird flying over Ding Darling NWR.