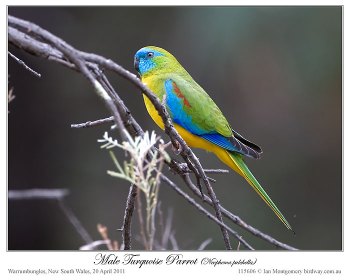 Ian’s Bird of the Week – Turquoise Parrot ~ by Ian Montgomery

Maybe I was tempting fate when last week I publicly declared my target species of the Pilliga trip to be the Turquoise Parrot, but fate was kind to me when I did the same thing with the Resplendent Quetzal on the eve of my visit to Costa Rica last year.

In truth I felt I needed a bit of help as I’ve been wanting to get reasonable photographs of these gorgeous birds since taking a very poor one of a female in the Warrumbungles in New South Wales in pre-digital days almost exactly eleven years ago. To that end I’d visited both the Warrumbungles and the Capertee Valley west of Sydney several times over the years, detoured via Warwick in Southern Queensland and camped the night in Chiltern in Northern Victoria, all places where this species has been reported.

We went to the Warrumbungles last Wednesday and we were just about to leave the second site – the Woolshed – recommended by a helpful but not optimistic ranger (‘they haven’t been seen for a month or two’) when Ivor, one of my two sharp-eyed companions, spotted a female on exactly the same powerlines as eleven years ago, but this time she flew off towards the creek without waiting to have her photo taken. A careful search of the creek revealed nothing even vaguely turquoise but eventually we found about 20 birds feeding on the grassy track on the far side.

I spent about 20 minutes sidling up to these birds as gradually as possible. The first two photos are of adult male birds, distinguishable by the reddish shouldered patches, which flew up into a shrub as I approached. The second male seems to be eyeing me quizzically as if wondering what I’m up to. The third photo is of a female feeding on the path. 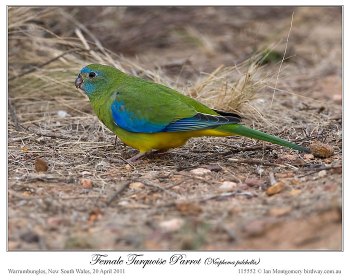 What a gorgeous parrot. Wow!

I know last week when Ian said he was off on an adventure to find that Turquoise Parrot, I prayed and asked that he find one. I was being a little selfish because I had never seen one and was trusting that his group would spot one. Whichever, fate or prayer, it is a choice we all make. I prefer the later.

See all of Ian’s Bird of the Week articles.