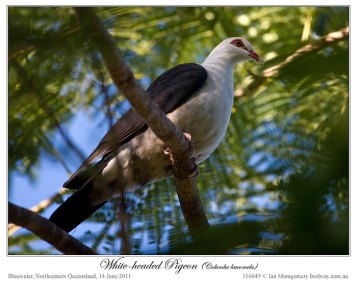 I’ve been preoccupied recently preparing photos for the digital publication that I first mentioned two weeks ago, so I haven’t taken many photos and hadn’t decided on this week’s bird when I took a break yesterday to put out the garbage. On the way back from the front gate, I spotted an adult male White-headed Pigeon feeding on the fruit of a boxwood shrub and took the long way round to the house to get my camera. The adult White-headed Pigeon was on my wanted list for the digital publication and hasn’t featured as a bird of the week, so two problems were solved simultaneously by just taking out the garbage. There’s a lesson there somewhere, I’m unsure what, but I do recall another occasion when I photographed Red-tailed Black-Cockatoos on a trip to the garbage dump: http://www.birdway.com.au/cacatuinae/red_tailed_black_cockatoo/source/redtailblackcockatoo02242.htm . 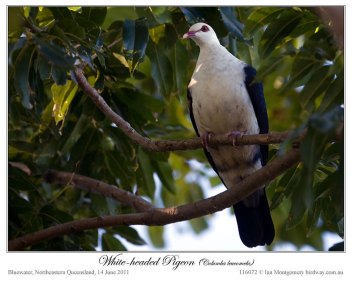 I disturbed him from the boxwood, but he flew up into a poinciana tree near the house (first photo) before retreating into the thicker foliage of what I think is an African mahogany (second photo), where he remained for ages.

White-headed Pigeons are large (to 41cm/16in in length) and rather splendid with their red and white faces and slightly iridescent bluish grey wing feathers. Here in North Queensland, they occur usually only in highland rainforest, and this is the first one that I’ve seen here near the coast, though farther south in southern Queensland and northern New South Wales (their stronghold) they do occur in coastal areas. The range from Cooktown in the north to about Bermagui on the south coast of NSW but, like other fruit-eating pigeons, they are fairly nomadic and sometimes occur in eastern Victoria. So, I don’t know whether this one is yet another refugee from cyclone Yasi or has just wandered down from the Paluma Range looking for food, as other birds do in winter. 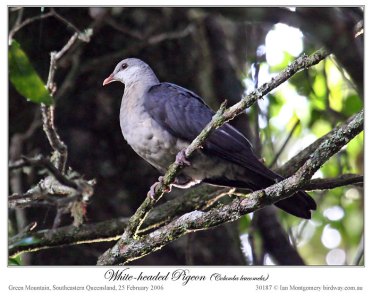 The third photo is an immature bird that I photographed some years ago in rainforest near O’Reilly’s Lodge in Lamington National Park in southeastern Queensland near the border with NSW. Immature birds have greyish, rather than white heads and breasts and a dark cap. Females are intermediate in colour between the juveniles and the adult male and also have the whitish cheek visible on the juvenile.

On a completely different subject have a look at this youtube video  if you want to see the piece that the recorder group to which I belong entered in the Recorder Romp competition organised recently by the ABC.