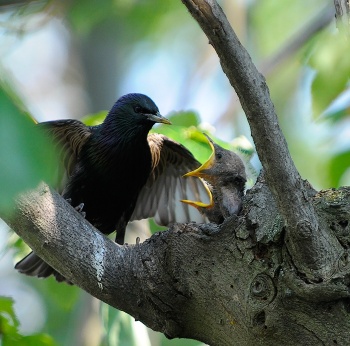 A crop (or croup sometimes called a craw) is a thin-walled expanded portion of the alimentary tract used for the storage of food prior to digestion that is found in many animals, including gastropods, earthworms, leeches, insects, birds, and even some dinosaurs.

As with most other organisms that have a crop, the crop is used to temporarily store food. Not all birds have a crop. In adult doves and pigeons, the crop can produce crop milk to feed newly hatched birds.

Scavenging birds, such as vultures, will gorge themselves when prey is abundant, causing their crop to bulge. They subsequently sit, sleepy or half torpid, to digest their food. Most raptors have one; like falcons, hawks, eagles and vultures but owls do not.

When we read God’s Word, do we digest it and meditate on what we have read?

I rejoice at thy word, as one that findeth great spoil. (Psalms 119:162 KJV)
Thy words were found, and I did eat them; and thy word was unto me the joy and rejoicing of mine heart: for I am called by thy name, O LORD God of hosts. (Jeremiah 15:16 KJV)
Let the words of my mouth, and the meditation of my heart, be acceptable in thy sight, O LORD, my strength, and my redeemer. (Psalms 19:14 KJV)

One thought on “Nuggets Plus – Digestion and Meditation”