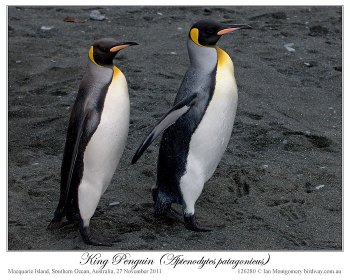 Ian’s Bird of the Week – King Penguin ~ by Ian Montgomery

The Royal Penguins may have won the bird of the trip award on the basis of character, but the sartorial crown went to the King Penguin also very common on the beach at Macquarie Island. We’ll see later that they also won the Worst Dressed Award. The adult King Penguins were magnificently turned out, and strode importantly around, very erect with chests puffed out as in the first photo. (If their suits hadn’t been pure silk, they might, however, be considered slight spivvy.)

They alway seemed to have some consequential to do, such as this one calling at intervals trumpet-like and being listened to deferentially by its followers and being answered in a similar vein by another leader at some distance. 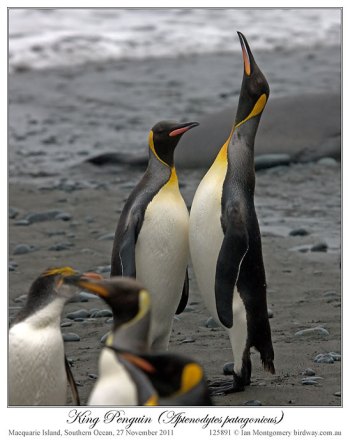 If you sat quietly on the beach, they would, like the Royals come over to inspect you, but they didn’t seem to approve of what they found. 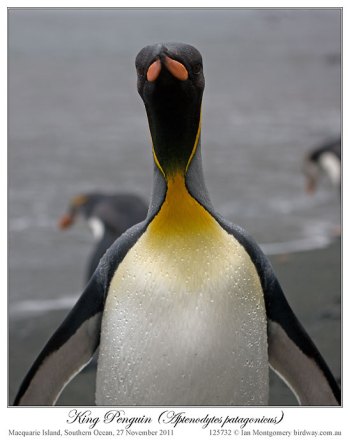 When called upon to do something undignified like feeding an unrelenting chick, they did so with an expression that suggested that this should really be done by a wet nurse, and the neighbours would turn avert their gaze disdainfully. 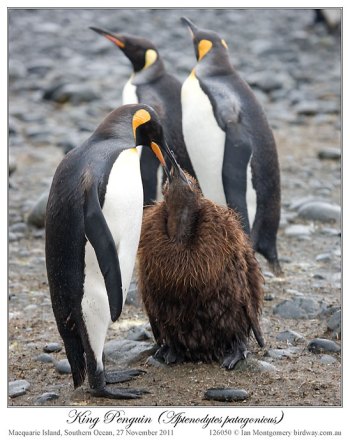 The chicks, of course, won the Worst Dressed Award and the adults, whenever possible, disowned them so that were forced to huddle in a creche at the unfashionable end of the beach. 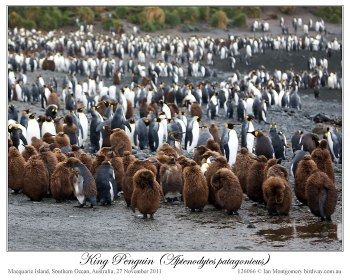 The chicks look as if they’re preening, but they are really trying to rip off their awful yeti outfits. You can see that some of them have nearly succeeded. This is a transformation to rival any emerging butterfly, and if Hans Christian Andersen had known about King Penguin chicks he would have chosen them rather than cygnets for his Ugly Duckling fairy tale. 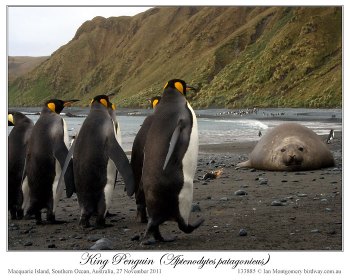 Meanwhile, at the other end of the beach, the King Penguins stride officiously towards an Elephant Seal lumbering out of the water. I couldn’t resist converting this into a comic-strip cartoon using an iPhone app called Halftone http://www.juicybitssoftware.com/halftone/ . 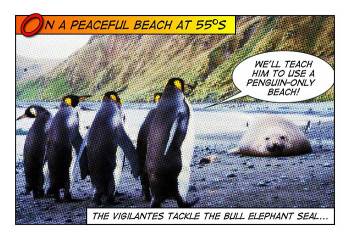 As you can imagine, it was a special day on Macquarie Island.
I’m continuing to put photos from the trip on the website and there are now 650 Australian bird species there. You can check the latest updates here: http://www.birdway.com.au/#updates .
Best wishes
Ian

Now Ian has gone to making cartoons. Ian, that must have been an exciting special day. From your writing, your pleasure shines through. Thanks for sharing your great photos with us again. Stay tuned for Ian’s next adventure. Can’t wait to see some more of his photos from that trip.

Penguines are in the Spheniscidae – Penguin Family of the Sphenisciformes Order. Penguins are the only family in the Order. Check out Ian’s Penguin photos at his Birdway.com site. He has photos for 9 of the 18 species of Penguins.

The king’s heart is in the hand of the LORD, as the rivers of water: he turneth it whithersoever he will. (Proverbs 21:1 KJV)