Ian’s Bird of the Week – Kea ~ by Ian Montgomery

If you park near the entrance to the Homer Tunnel on the way to Milford Sound in Fiordland on the South Island of New Zealand, you are likely to be approached by one of these interesting-looking parrots.

‘Friendly-looking chap’, you might think, ‘I wonder what he’s after? Just saying Hello? Some food maybe?’. Wrong. This one, the Kea, has a one-track mind, and is only interested in destruction, or more specifically dismantling your vehicle. 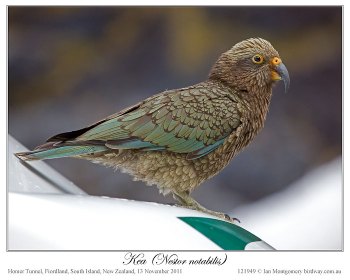 Quick as a flash, it and his pals will check it out for weak spots and set to work – this one with yellow cere, lower mandible and eye-ring is a juvenile delinquent (yes, that’s snow in the background, these are tough birds). Let’s see if we can rip the roof off.

Oh well, the roof was stronger than it looked. How about the braking light above the back door, this has some promising cracks. 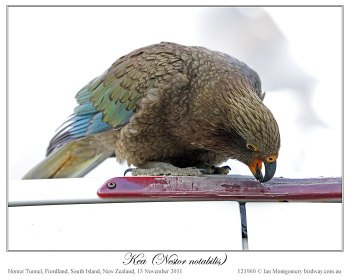 Meanwhile, this hardened criminal (this is an adult bird) has learnt that the rubber is more vulnerable and attacks the lining of the front door.

And don’t think you can get rid of us by just driving off. We’ll hang on grimly until we get blown off by the breeze. 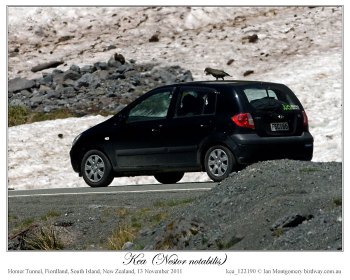 Keas have the reputation of being playful, but the intensity and obsessiveness of their attacks looked anything like a game to me and more like a compulsion. In fact, their attacks did no noticeable damage even though I parked the camper there for some time so that I could look for the Rock Wrens (Bird of the Week #438). According to my field guide ‘the worst offending birds are caught and transferred to distant sites or taken into captivity’. Sounds familiar.

At one time, Keas were supposed to kill sheep, and the resulting bounty led to their persecution and decline. They have been fully protected since 1986 and the population is recovering.
Keas are quite large birds, 46cm/18in in length and weighting up to 1Kg/2.2lbs. They and their relatives the Kaka and the Kakapo comprise a taxonomically distinct lineage of New Zealand parrots not closely related to any others and usually placed either in their own family (IOC) or sub-family (Birdlife International). While the flightless Kakapo is critically endangered and the subject of an intensive rescue mission http://www.kakaporecovery.org.nz/ , the Kea is quite common in Alpine areas of the South Island and the Kaka occurs in the forests of both islands, though I failed to find it on this trip. It’s good to leave something for the next visit.
Best wishes
Ian
—

Sounds like you might want to keep an eye on your personal property around those birds! It is amazing how much the birds vary in their habits and diets. Every time Ian writes about his encounters with the various birds, it’s always different and interesting. Keep up the great birding, Ian, we enjoy your encounters with our avian friends around the world.

See Ian’s Cockatoos & Allies and his Parrots & Allies, which are part of the Strigopidae Family. Those parrots along with the Cockatoos – Cacatuidae and Parrots – Psittacidae Families make up the Psittaciformes Order.