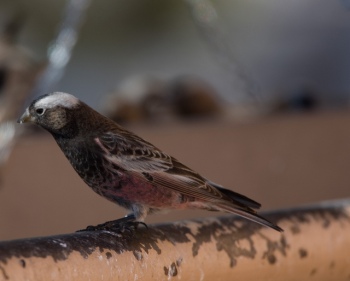 The Black Rosy-Finch breeds in the high mountains of the northern Great Basin. This encompasses the area from northeastern Nevada to southwestern Montana. It is not a long-distance migrant, but moves to lower elevations away from the breeding area as snow cover increases. In some winters these flights reach southward to Colorado, New Mexico, and rarely Arizona and California. Although population appears to be stable, it is uncommon over its very small breeding range.

The Black Rosy-finch breeds on the barren tundra of mountain summits, usually on rocky or grassy areas and near glaciers and continual snowfields. It winters at lower elevations in open areas such as fields, cultivated lands, roadsides, and human-made structures. Departure to higher elevations from the wintering grounds is by April. Nest building occurs between mid-June and mid-July, in a crevice or hole in near-inaccessible locations such as on vertical cliffs. The nest is made of grasses, moss, and sometimes feathers mixed with grass and animal hair, and contain four to five eggs on average. The diet consists of seeds of grasses and weeds except in summer when supplemented by insects. 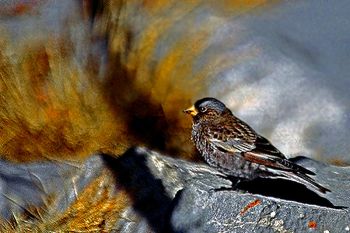 These birds seem to know the secret of living in secret. They know that living on mountain summits, would be inaccessible for its predators. When the name of THE ROCK becomes our strong tower, it not only becomes inaccessible but also impossible for satan to even locate us.

The name of the LORD is a strong tower: the righteous runneth into it, and is safe. (Psalm 18:10)

There is not only protection on the rock, there is honey in its crevice too.

But he would feed you with the finest of the wheat, and with honey from the rock I would satisfy you. (Psalm 81:16)

The Black Rosy Finch builds a cup nest in a cavity on a cliff. Most birds migrate short distances to lower elevations and further south and return to the alpine areas in April. These birds forage on the ground, may fly to catch insects in flight. They mainly eat seeds from weeds and grasses and insects, often in areas where snow is melting, uncovering food items and new plant shoots.

God fed the Israelites with the dew wrapped Manna, bread of the angels.. God’s goodness is fresh each new morning and His goodness is like morning dew, underneath His dew lies our due. But do we seek for His dew every morning? Remember, as the sun goes up, the manna melts. His goodness too would melt if we don’t seek Him early in the morning isn’t it? When His dew melts our lives dry up.. 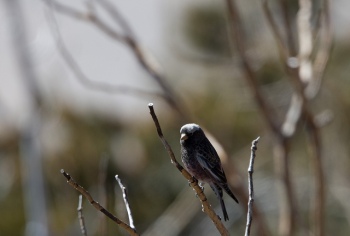 They often feed in small flocks, as the male will defend its female’s territory during breeding season, not just the nest but where ever she goes. This behavior is common with the rosy finches. When breeding both males and females develop throat pouches, known as gular pouches or gular skin, to carry food to their chicks.

God’s flock too is small, for He has promised to be present where two or three are gathered. These male birds remind us of how our Lord too defends our territories, though we haven’t yet taken steps to breed for the extension of His kingdom. We have an awesome God, who not only defends our territories but also followed us where ever we went and ended up giving His precious life for you and me.. What a mighty God we serve!!

Have I not commanded you? Be strong and courageous. Do not be afraid; do not be discouraged, for the LORD your God will be with you wherever you go. (Joshua 1:9)

Please visit us at:
Crosstree