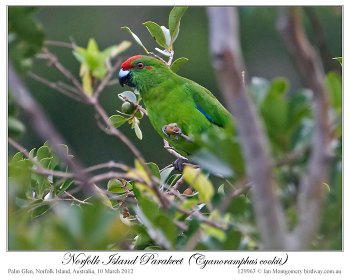 Well, your unwavering moral and spiritual support has done it again: here is the Tasman or Norfolk Island Parakeet (better known here as the Green Parrot to distinguishing it from the introduced Red Parrot – the Crimson Rosella). Thank you very much!

We were met at the airport by Albury-Wodonga birder Dougald Frederick, excitedly carrying the news that there was a vagrant Ringed Plover at Slaughter Bay. So we picked up the hire cars, checked into our accommodation and went down to the Bay, whose name is a corruption of Slackwater Bay, rather than the site of a messy event in the generally nasty penal history of the island. Ringed Plovers are indeed rare in Australia, but I was brought up with them in Ireland and couldn’t conceal my impatience to get to Palm Glen near Mount Pitt, where Dougald had been regularly seeing the Parakeets in the evening.

Eventually we went there and eventually, just before sunset and after my travelling companions had left to buy food for breakfast, the Parakeet in the first photo arrived and starting feeding on the feral guavas, fruiting prolifically around the picnic area. The guavas have dense foliage and the red fruit made the feeding Parakeets very hard to see. They were easier to see, but harder to photograph, when they used the top of the numerous tall Norfolk Island pines as vantage points, second photo. This less brightly coloured bird is a female or juvenile; the ones in the first and third photos are males.

After that, we visited Palm Glen regularly in the evenings and always saw at least one, distant Parakeet, with a flock of 6 on the second day when I took the third photo, the last occasion on which the birds were close enough to photograph. As well as being a pleasant spot to watch the sunset, it was also a good site for the other two remaining endemic species, the Norfolk Island Gerygone and the Slender- or Long-billed White-eye, and for the endemic races of the Golden Whistler and Grey Fantail.

The Norfolk Island Parakeet was originally regarded as a race of the Red-crowned Parakeet of New Zealand until genetic studies showed that it was sufficiently distinct to warrant the status of a full species. It came close to extinction in the 1980s when the population declined to an estimated 32 individuals with 4 breeding pairs (the sex ratio was heavily biased towards males). Since then, it has been the subject of an intense recovery program to control introduced predators and competitors, and the population is now estimated at perhaps 200 individuals, though our birding guide on Monday, Margaret Christian reckons that that is optimistic, given the frequency of sightings.

It’s a lovely island, friendly and historically interesting, so we have had an enjoyable week. If you intend to visit, we can highly recommend our accommodation, Poinciana Cottages – we all agreed that we could quite happily live in them permanently, and they gave me a free upgrade from an extra bed in one of our two cottages to solo occupancy of a third cottage. If you’re birding, then a morning spent with Margaret Christian is essential and she bakes delicious cake for morning tea. We also did a trip to Phillip Island for the seabirds. That too is highly recommended if the weather is suitable and David Bigg is the person to see about that.

Best wishes and much gratitude,

Glad we could assist with our prayers. What another neat creation to observe. I love the way they were designed to blend right in with the plants they like to eat. It protects them, but it does make for the challenge of birdwatching photographers and watchers. Thanks for your persistence, Ian.

Look at the birds of the air, for they neither sow nor reap nor gather into barns; yet your heavenly Father feeds them. Are you not of more value than they? (Matthew 6:26 NKJV)

The Norfolk Parakeet (Cyanoramphus cookii), also called Tasman Parakeet,[1] Norfolk Island Green Parrot or Norfolk Island Red-crowned Parakeet, is a species of parrot in the Psittacidae family. It is endemic to Norfolk Island (located between Australia, New Zealand and New Caledonia in the Tasman Sea).

Its natural habitats are subtropical or tropical moist lowland forests and plantations. It is threatened by habitat loss.

Check out Ian’s photos of others in the Psittacidae – Parrot Family.