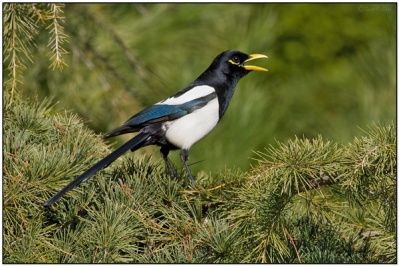 Mother Magpie’s Kindergarten ~ from The Curious Book of Birds

ID you ever notice how different are the nests which the birds build in springtime, in tree or bush or sandy bank or hidden in the grass? Some are wonderfully wrought, pretty little homes for birdikins. But others are clumsy, and carelessly fastened to the bough, most unsafe cradles for the feathered baby on the treetop. Sometimes after a heavy wind you find on the ground under the nest poor little broken eggs which rolled out and lost their chance of turning into birds with safe, safe wings of their own. Now such sad things as this happen because in their youth the lazy father and mother birds did not learn their lesson when Mother Magpie had her class in nest-making. The clumsiest nest of all is that which the Wood-Pigeon tries to build. Indeed, it is not a nest at all, only the beginning of one. And there is an old story about this, which I shall tell you.

In the early springtime of the world, when birds were first made, none of them—except Mother Magpie—knew how to build a nest. In that lovely garden where they lived the birds went fluttering about trying their new wings, so interested in this wonderful game of flying that they forgot all about preparing a home for the baby birds who were to come. When the time came to lay their eggs the parents knew not what to do. There was no place safe from the four-legged creatures who cannot fly, and they began to twitter helplessly: “Oh, how I wish I had a nice warm nest for my eggs!” “Oh, what shall we do for a home?” “Dear me! I don’t know anything about housekeeping.” And the poor silly things ruffled up their feathers and looked miserable as only a little bird can look when it is unhappy.

All except Mother Magpie! She was not the best—oh, no!—but she was the cleverest and wisest of all the birds; it seemed as if she knew everything that a bird could know. Already she had found out a way, and was busily building a famous nest for herself. She was indeed a clever bird! She gathered turf and sticks, and with clay bound them firmly together in a stout elm tree. About her house she built a fence of thorns to keep away the burglar birds who had already begun mischief among their peaceful neighbors. Thus she had a snug and cosy dwelling finished before the others even suspected what she was doing. She popped into her new house and sat there comfortably, peering out through the window-slits with her sharp little eyes. And she saw the other birds hopping about and twittering helplessly.

“What silly birds they are!” she croaked. “Ha, ha! What would they not give for a nest like mine!”

But presently a sharp-eyed Sparrow spied Mother Magpie sitting in her nest.

“Oho! Look there!” he cried. “Mother Magpie has found a way. Let us ask her to teach us.”

Then all the other birds chirped eagerly, “Yes, yes! Let us ask her to teach us!”

So, in a great company, they came fluttering, hopping, twittering up to the elm tree where Mother Magpie nestled comfortably in her new house.

“O wise Mother Magpie, dear Mother Magpie,” they cried, “teach us how to build our nests like yours, for it is growing night, and we are tired and sleepy.”

The Magpie said she would teach them if they would be a patient, diligent, obedient class of little birds. And they all promised that they would.

She made them perch about her in a great circle, some on the lower branches of the trees, some on the bushes, and some on the ground among the grass and flowers. And where each bird perched, there it was to build its nest. Then Mother Magpie found clay and bits of twigs and moss and grass—everything a bird could need to build a nest; and there is scarcely anything you can think of which some bird would not find very useful. When these things were all piled up before her she told every bird to do just as she did. It was like a great big kindergarten of birds playing at a new building game, with Mother Magpie for the teacher.

She began to show them how to weave the bits of things together into nests, as they should be made. And some of the birds, who were attentive and careful, soon saw how it was done, and started nice homes for themselves. You have seen what wonderful swinging baskets the Oriole makes for his baby-cradle? Well, it was the Magpie who taught him how, and he was the prize pupil, to be sure. But some of the birds were not like him, nor like the patient little Wren. Some of them were lazy and stupid and envious of Mother Magpie’s cosy nest, which was already finished, while theirs was yet to do.

As Mother Magpie worked, showing them how, it seemed so very simple that they were ashamed not to have discovered it for themselves. So, as she went on bit by bit, the silly things pretended that they had known all about it from the first—which was very unpleasant for their teacher.

Mother Magpie took two sticks in her beak and began like this: “First of all, my friends, you must lay two sticks crosswise for a foundation, thus,” and she placed them carefully on the branch before her.

“Oh yes, oh yes!” croaked old Daddy Crow, interrupting her rudely. “I thought that was the way to begin.”

Mother Magpie snapped her eyes at him and went on, “Next you must lay a feather on a bit of moss, to start the walls.”

“Certainly, of course,” screamed the Jackdaw. “I knew that came next. That is what I told the Parrot but a moment since.”

Mother Magpie looked at him impatiently, but she did not say anything. “Then, my friends, you must place on your foundation moss, hair, feathers, sticks, and grass—whatever you choose for your house. You must place them like this.”

“Yes, yes,” cried the Starling, “sticks and grass, every one knows how to do that! Of course, of course! Tell us something new.”

“Next you must lay a feather”

Now Mother Magpie was very angry, but she kept on with her lesson in spite of these rude and silly interruptions. She turned toward the Wood-Pigeon, who was a rattle-pated young thing, and who was not having any success with the sticks which she was trying to place.

Mother Magpie hopped up and down on one leg, so angry she could hardly croak.

“You silly Pigeon,” she sputtered, “not so. You are spoiling your nest. Place the sticks so!”

“I know, I know! That will do-o-o, that will do-o-o!” cooed the Wood-Pigeon obstinately in her soft, foolish little voice, without paying the least attention to Mother Magpie’s directions.

“We all know that—anything more?” chirped the chorus of birds, trying to conceal how anxious they were to know what came next, for the nests were only half finished.

But Mother Magpie was thoroughly disgusted, and refused to go on with the lesson which had been so rudely interrupted by her pupils.

“You are all so wise, friends,” she said, “that surely you do not need any help from me. You say you know all about it,—then go on and finish your nests by yourselves. Much luck may you have!” And away she flew to her own cosy nest in the elm tree, where she was soon fast asleep, forgetting all about the matter.

But oh! What a pickle the other birds were in! The lesson was but half finished, and most of them had not the slightest idea what to do next. That is why to this day many of the birds have never learned to build a perfect nest. Some do better than others, but none build like Mother Magpie.

But the Wood-Pigeon was in the worst case of them all. For she had only the foundation laid criss-cross as the Magpie had shown her. And so, if you find in the woods the most shiftless, silly kind of nest that you can imagine—just a platform of sticks laid flat across a branch, with no railing to keep the eggs from rolling out, no roof to keep the rain from soaking in—when you see that foolishness, you will know that it is the nest of little Mistress Wood-Pigeon, who was too stupid to learn the lesson which Mother Magpie was ready to teach.

And the queerest part of all is that the birds blamed the Magpie for the whole matter, and have never liked her since. But, as you may have found out for yourselves, that is often the fate of wise folk who make discoveries or who do things better than others.

Let the wise hear and increase in learning, and the one who understands obtain guidance, (Proverbs 1:5 ESV)

(Photos added by me.)