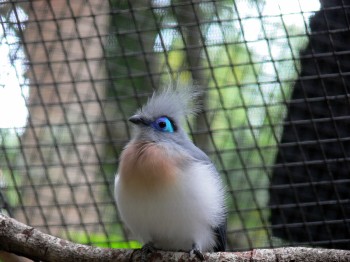 And the owl, and the night hawk, and the cuckow, and the hawk after his kind, (Leviticus 11:16 KJV)

What an interesting Family to which the Cuckoo belongs. Having posted Ian’s Bird of the Week – Little Bronze Cuckoo yesterday, I worked on the Cuckoo – Cuculidae Family to find some more photos. There are a few missing photos, but some of them are of endangered or rarely seen birds. There are some interesting species and some beautiful one also. The Coua genus have the most beautiful eyes. They remind me of the Egyptian Eyes on statues and paintings. We get to see the Crested Coua every time we go over to the Lowry Park Zoo in Tampa. We have to photograph through the mesh, but this one of my better attempts. (See Above) Click through these links and you will see some of the Lord’s Creative Hand at work.

Aren’t they amazing? Wow! At least I think they are.

In Birds of the Bible – Cuckoo II it was explained how Leviticus 11:16 and Deuteronomy 14:15 uses Cuckow, Cuckoo, Sea-gull, Sea-hawk in the different versions. I have since added several more Bible Translations to my e-Sword program, so lets see if anything new shows up. The “cuckow” is in the AKJV, “sea gull” in the AMP, the “coockowe” in the Bishops, CJB calls it the “seagull”, Geneva has “seameaw”, the Tyndale calls it a “cocow” and UKJV the “cuckoo.” Seems that it is still split between the same birds. Thus they get to be one of our Birds of the Bible to study.

As mentioned before, it gives us a chance to learn about the many birds that we are blessed with and a reason to concentrate on this family. Notice that both references mention after their kind:

The whole family of the Cuculidae includes not only the Cuckoo, but also the Ani, Roadrunner, Ground, Bronze, Coucal, Coua, Malkoha, Koel, Bronze Cuckoo, Long-tailed Cuckoo, Hawk-Cuckoo, Drongo-Cuckoo, and Lizard Cuckoos. Most in America are familiar with the Roadrunner if by no other way than by Wile E Coyote who is always chasing the Roadrunner in the Looney Tune Cartoons.

Here is a real Roadrunner:

Notice the Eyes even on a Roadrunner. Roadrunners are fast-running birds that have  long tails and a crests. The birds are found in southwestern United States and Mexico. They range from 18-22 in. (46-56 cm) from the beak to the tail. Speeds of up to 20 miles per hour (32 km/h) have been reported. They can fly, but prefer to sprint instead.

More about this family later. Thought you might enjoy seeing some more of our Birds of the Bible that are here to enjoy and be blessed by from the Hand of the Lord.

One thought on “Birds of the Bible – Cuckoo III”