One night when we were in our room on Lord Howe Island, we heard a scratching noise at the front door. On investigation this proved to be a juvenile Flesh-footed Shearwater from a nearby nesting colony attracted by the light. This one, first photo, is almost complete fledged with traces of fluffy down still apparent.

In the region of 20,000 to 40,000 pairs of Flesh-footed Shearwaters nest on Lord Howe. They dig nesting burrows in the sandy soil of the forest, mainly in the lowland area where the settlement is situated. Adults come ashore under cover of darkness to nest, change incubation shifts and feed their partners and young. They make their presence known by making loud crooning noises that sometimes sound like cats fighting but during daylight, they are silent and there is usually little sign of them on the island. 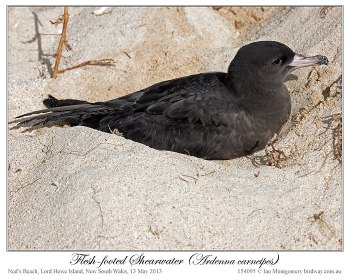 We were there at the end of the breeding season. When the juveniles are fledged, their cosseted existence comes to an abrupt end as the adults stop coming ashore and the young are abandoned to fend for themselves. Eventually, they wander out of their burrows and (mostly) make their way to the sea to start an independent pelagic life. Lord Howe is the only colony of this species on the east coast of Australia, but there are other colonies on islands off South Australia (one), Southwest Western Australia (several), New Zealand and St Paul Island in the South Atlantic.

The following day, we found another fledged juvenile when we went to Ned’s beach for a snorkel, photos 2 and 3. This one seemed to have failed to make it down the beach and was presumably waiting for darkness. The Flesh-footed is one of several rather similar, mainly dark shearwaters breeding in Australian waters and the third photo shows its two-toned bill – horn-coloured with a dark tip which is its most obvious field mark.

Outside the breeding season, Wedge-tailed Shearwaters are pelagic and range widely in both the Pacific and Indian Ocean. Birds from Lord Howe and New Zealand migrate north to the waters off South Korea and also appear off the coast of North America. The two in the fourth photo were off Wollongong, south of Sydney, in the deep water beyond the continental shelf. In this photo you can see the two-tone bills and the pink legs and feet.

Here, photo 5, for comparison is a Wedge-tailed Shearwater. Note the grey bill and longer, more pointed tail. The third common species in Australia is the Short-tailed, but, true to its name, the feet extend beyond the tip of the tail in flight.

All these species are collectively called “muttonbirds” and were harvested in large numbers by early settlers for their eggs and oily, rather salty flesh. Clumsy on land and foolishly trusting, they were never rated as very bright. They are, however, masters of the air and sea and their annual movements around the oceans of the world ending up on tiny specks of land like Lord Howe are impressive feats of both navigation and endurance.

the birds of the heavens, and the fish of the sea, whatever passes along the paths of the seas. O LORD, our Lord, how majestic is your name in all the earth! (Psalms 8:8-9 ESV)

I am always amazed when I see this kind of snout on birds. What an amazing design. See: Formed By Him – Sea Birds That Drink Seawater

The family Procellariidae is a group of seabirds that comprises the fulmarine petrels, the gadfly petrels, the prions, and the shearwaters. This family is part of the bird order Procellariiformes (or tubenoses), which also includes the albatrosses, the storm-petrels, and the diving petrels.

The Flesh-footed Shearwater, Puffinus carneipes, is a small shearwater. Its plumage is black. It has pale pinkish feet, and a pale bill with a black tip. Together with the equally light-billed Pink-footed Shearwater, it forms the Hemipuffinus group, a superspecies which may or may not have an Atlantic relative in the Great Shearwater. These are large shearwaters which are among those that could be separated in the genus Ardenna.

It breeds in colonies, and has two main breeding areas: one in the South West Pacific Ocean includes Lord Howe Island (20,000 to 40,000 pairs) and northern New Zealand (50,000 to 100,000 pairs); the other is along the coast of Western Australia from Cape Leeuwin to the Recherche Archipelago. Another 600 pairs breed on St Paul Island in the Indian Ocean, as well in the Astola Island of Pakistan in the Arabian Sea. It occurs as a summer visitor in the North Pacific Ocean as far north as British Columbia. Flesh-footed shearwaters have been sighted in the Central-North Pacific, above the main Hawaiian Islands as well. (Wikipedia, with editing)