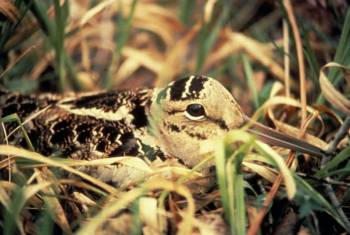 The drought had been rather severe that summer, and the normally moist woodland was dry and parched. Suddenly, out of the brush, a chunky bird was frantically searching the soil for earthworms. Following behind, and looking as famished as their mama, were four of her wood-brown chicks. And as their mama stopped and probed the arid ground before her, the chicks looked on with eager expectation. But all at once, and without warning, mama bird performed an amazing feat! She lay her body flat along the ground and began drumming the surface with her wings. Minutes later, their hunger satisfied, this American Woodcock family disappeared into the dry undergrowth.

All birds reveal incredible design, but the American Woodcock has an interesting design feature in its behaviour as well.

We have been led to believe by the scientific establishment that birds, like the American Woodcock, are products of time and chance. That through natural processes and eons of time, they are the descendants of a common ancestor that sprang from the reptilian line.

On the other hand, the Word of the Creator states that birds were designed and created by Him, according to their own kind, on the fifth day. As a result, He considered them very good (Genesis 1:31). 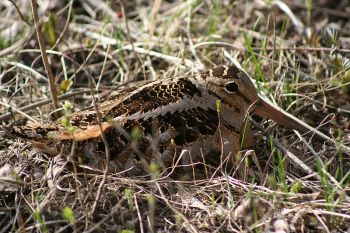 Chance vs design. Aimlessness vs plan and purpose. These are two fiercely competitive worldview’s. They are mutually exclusive. And, contrary to popular opinion, the essence of both can be described as the science of one person’s religion vs the science of another’s. Why? Because no one was there at the beginning! Scientifically speaking, the conditions of the early earth are unknown and hence cannot be duplicated. On the other hand, God was there! He is perfectly capable of communicating to His people.

When we look at His world, we find tremendous evidence of His fingerprints, so to speak—design and purpose.

For instance, how did drumming the ground bring the woodcock family from famine to feast? Amazingly enough, mama woodcock was aware of the habits of earthworms. She knew that in dry conditions, they squirm to the lower, moist depths of the soil. However, she was also aware of another quirk in their behaviour! When it rains, worms can sense the ground vibrations caused by raindrops. When this happens, they quickly propel themselves to the soil surface so they won’t drown. Therefore, when the mother beat the ground, she and her family were able to leave the area with their hunger pangs satisfied.

How did she know how to do that? What complicated series of events caused all of this information to come together in one little bird? Was it by chance and natural processes or was it creation with deliberate purpose?

Not only did it know the habits of the earthworms, this bird’s anatomy is highly complex as well. The eyes are located high on its head enabling it to see 360 degrees. Imagine being able to see, with overlapping vision allowing depth perception, both in front of and behind you. The ears are situated between the eyes and its eight-centimetre (three-inch) bill. This highly sophisticated hearing apparatus is better able to detect the sub-soil movement of its prey. Working together with its exquisitely attuned vision and hearing, are its sensitive feet. Designed to feel ground vibration, they help to pinpoint a worm’s location. 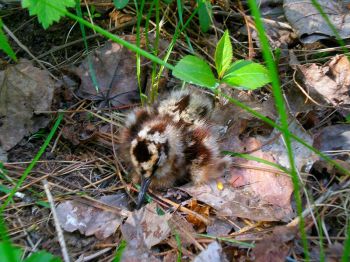 Being fairly certain that the worm is within reach, the bird pushes its bill into the ground. But this isn’t just any old bill! The flexible tip, which allows it to open and close in a tweezer fashion within tiny spaces, has highly sensitive nerve endings. It allows the woodcock to know that it has grasped its meal.
A nocturnal animal, the woodcock is probably best known for its bizarre courtship behaviour. At dusk, the male of the species will circle high in the sky on a spring night making a continual ‘twittering’ noise. At this highest point, he’ll suddenly dive in a zig-zag fashion toward the earth. It’s a most unusual display, completely captivating his mate-to-be. The three outer primary feathers not only make the strange sounds of this courting male, but also contribute greatly to his survival. When the woodcock is in danger of being discovered by a predator, it will explode from its concealment. In so doing, those feathers make such an unexpected and horrible noise, that often the predator is temporarily shocked. This brief moment is all the time the bird needs to make its escape!1

When it is realized how many of these complicated factors must come together, at the same time, just for the bird to survive, that all this could come from gradual, piecemeal evolution defies credibility.

The outdoors is chock full of unique and fascinating organisms, like the American Woodcock, just waiting to be discovered by both children and adults alike. All of creation, though now fallen from its original perfection, holds a wonder and fascination that finds its meaning in the Creator God who put it there! Evidence of His handiwork can be seen and understood. And evidence can be logically discussed in scientific circles, so be bold, be confident and be in awe of His creative abilities!

The world today needs more people who will proclaim the news in every land that Jesus Christ, the awesome Creator, came to us, lived amongst us, died and rose again for us!

‘Be strong and of a good courage; be not afraid, neither be thou dismayed: for the Lord thy God is with thee whithersoever thou goest’ (Joshua 1:9).

Permission from © 2013 Answers in Genesis – www.AnswersInGenesis.org.

The American Woodcock belongs to the Scolopacidae – Sandpipers, Snipes Family which has 96 species, of which 8 are Woodcocks.

“The American Woodcock (Scolopax minor), sometimes colloquially referred to as the Timberdoodle, is a small chunky shorebird species found primarily in the eastern half of North America. Woodcocks spend most of their time on the ground in brushy, young-forest habitats, where the birds’ brown, black, and gray plumage provides excellent camouflage.

Because of the male Woodcock’s unique, beautiful courtship flights, the bird is welcomed as a harbinger of spring in northern areas. It is also a popular game bird, with about 540,000 killed annually by some 133,000 hunters in the U.S. (Ugh!)

The American Woodcock is the only species of Woodcock inhabiting North America. Although classified with the sandpipers and shorebirds in Family Scolopacidae, the American Woodcock lives mainly in upland settings. Its many folk names include timberdoodle, bogsucker, night partridge, brush snipe, hokumpoke, and becasse.

The plumage is a cryptic mix of different shades of browns, grays, and black. The chest and sides vary from yellowish white to rich tans. The nape of the head is black, with three or four crossbars of deep buff or rufous. The feet and toes, which are small and weak, are brownish gray to reddish brown.[8]

Woodcock have large eyes located high in the head, and their visual field is probably the largest of any bird, 360° in the horizontal plane and 180° in the vertical plane.

The Woodcock uses its long prehensile bill to probe in the soil for food, mainly invertebrates and especially earthworms. A unique bone-and-muscle arrangement lets the bird open and close the tip of its upper bill, or mandible, while it is sunk in the ground. Both the underside of the upper mandible and the long tongue are rough-surfaced for grasping slippery prey.

In Spring, males occupy individual singing grounds, openings near brushy cover from which they call and perform display flights at dawn and dusk, and if the light levels are high enough on moonlit nights. The male’s ground call is a short, buzzy peent. After sounding a series of ground calls, the male takes off and flies from 50 to 100 yards into the air. He descends, zigzagging and banking while singing a liquid, chirping song. This high spiralling flight produces a melodious twittering sound as air rushes through the male’s outer primary wing feathers.” (Wikipedia with editing)