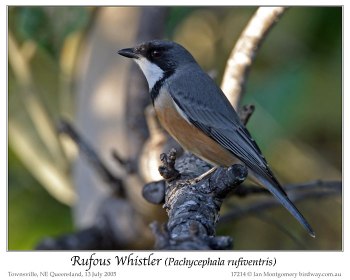 Bird of the Week #493: Rufous Whistler ~ by Ian Montgomery

Here’s another good candidate for bird of the week that has slipped through the cracks. It’s a good candidate because it’s an attractive bird that sounds beautiful as well. Males are grey and black with a rufous belly, white throat and black breast band and look very dapper. The bird in the first two photos belongs to the nominate race rufiventris, widespread through most of mainland Australia but absent from Tasmania. Males of the nominate race have black eyebrows and lores (the area between the eye and the bill), more obvious in the first photo. 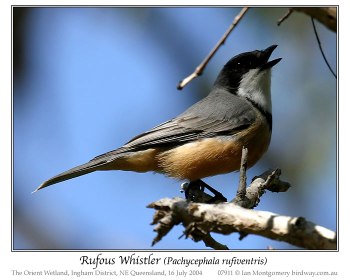 Rufous Whistlers are very vocal with a rich vocabulary which includes loud calls with a Whipbird-like finish – probably territorial between males – repeated ‘joey-joey-joey’ song and trills. The ‘joey’ song note, repeated up to 30 times, is sung by both sexes alternating and accompanied by a seesawing dancing motion of the body. This is wonderful to watch, and the male in the second photo is in mid-performance. The trills are apparently only made by the male.

The third photo shows a female with grey back and rufous belly and streaked throat and breast.

Juveniles are similar to females, but with browner upper-parts, heavier streaks, bills with a pale base, and rufous edges to the flight feathers (as do immatures of other species such as the Golden Whistler), fourth photo. 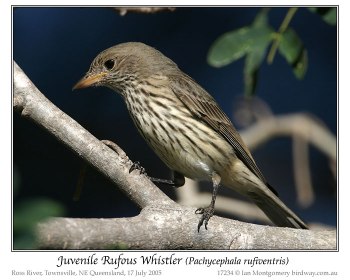 Several other races have been described in Northern Australia, and the males of these generally lack the black eyebrow, see the fifth photo. This bird belongs to perhaps the most distinctive race pallida which has a much paler belly, and this race is found in Cape York, e.g. the Mitchell River Catchment, and Northwestern Queensland.

He will raise a signal for nations far away, and whistle for them from the ends of the earth; and behold, quickly, speedily they come! (Isaiah 5:26 ESV)

What a beautiful sound that Whistler is making. Must be nice to hear them in person. The bird is also an attractive bird. They belong to the Pachycephalidae – Whistlers and Allies Family which has 52 species in it. Predominantly a reddish-brown and grey bird, it makes up for its subdued plumage with its song-making ability. Like many other members of the Pachycephalidae, it has a variety of musical calls.

The family Pachycephalidae, collectively the whistlers, includes the whistlers, shrike-thrushes, shrike-tits, pitohuis and Crested Bellbird, and is part of the ancient Australo-Papuan radiation of songbirds. Its members range from small to medium in size, and occupy most of Australasia.

The whistlers are stout birds with strong bills, and the group was once known as the thickheads due to the large rounded heads of many species. Their plumage is rufous, brown, or grey in the majority of species. Nevertheless a few species, particularly the Golden Whistler and its close relatives, have bright plumage. One of the more unusual traits of this family is found in the feathers of some of the pitohuis, which have toxins. These toxins are probably a deterrent to parasites and may also serve to dissuade predators from taking the birds. (Wikipedia)