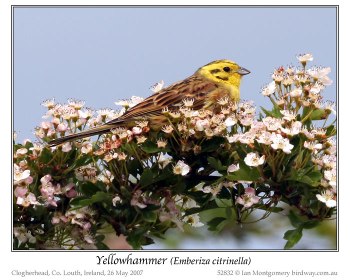 Ian’s Bird of the Week – Yellowhammer ~ by Ian Montgomery

Continuing the theme of finches and finch-like birds here’s a photo of a male Yellowhammer along the same lane in Co. Louth as the Eurasian Bullfinch. The Yellowhammer is a bunting and belongs to the family Emberizidae, which includes the New World Sparrows.

When the first photo was taken, the Hawthorn was in full bloom. The second photo was taken 12 days later – on the same day as last week’s Bullfinches – and the Hawthorn is almost finished. Yellowhammers have a characteristic rapid slightly nasal song often rendered as ‘little bit of bread and NO cheese’ with the ‘NO’ higher and the ‘cheese’ lower and longer than the other notes. Sadly, European populations of Yellowhammers have suffered from intensive farming and the removal of hedges.

Like many other European, or more strictly ‘British’ songbirds, Yellowhammers have been introduced into New Zealand where they have done well. Vagrants from the New Zealand population have been recorded on rare occasions on Lord Howe Island, so the Yellowhammer is the only member of the family on the Australian List. The third photo was taken in New Zealand when I was searching at a known site for the extremely rare Black Stilt on the Ahuriri River in the Waitaki Valley on the South Island. I had just parked nearby but stopped to take the Yellowhammer photo on the principle of a bird in the hand . .

In fact, less than ten minutes later I took this photo, which featured as bird of the week three days after I’d taken the photos (I couldn’t wait to show it off!).

The sharp-eyed among you would have noticed that the sequence number of the Black Stilt is 44 greater than that of the Yellowhammer so it was a busy ten minutes and you might wonder what featured in the intervening photos. Well, they were of a smart New Zealand tern called the Black-fronted as there was a small colony of them nesting in the pebbles beside the river. That hasn’t featured as bird of the week, so I’ll hold it over till next time.

also seven each of birds of the air, male and female, to keep the species alive on the face of all the earth. (Genesis 7:3 NKJV)

The Yellowhammer (Emberiza citrinella) is a passerine bird in the bunting family Emberizidae. It is common in all sorts of open areas with some scrub or trees and form small flocks in winter.

The Yellowhammer is a robust 15.5–17 cm long bird, with a thick seed-eater’s bill. The male has a bright yellow head, yellow underparts, and a heavily streaked brown back. The female is much duller, and more streaked below. The familiar, if somewhat monotonous, song of the cock is often described as A little bit of bread and no cheese, although the song varies greatly in space. Its name is thought to be from the German word ammer meaning bunting.

Its natural diet consists of insects when feeding young, and otherwise seeds. The nest is on the ground. 3-6 eggs are laid, which show the hair-like markings characteristic of those of buntings.