One generation shall praise Your works to another, And shall declare Your mighty acts. (Psalms 145:4 NKJV)

How can an Eurasian Jay be a Bird of the Bible? Many times I have quoted the verse, in Job 12:17, about learning from the birds and now we have another bird we can learn from.  Focusing On Wildlife had an interesting article, Male Eurasian Jays Surprise Ornithologists.

Some quotes from the article:”The ability to disengage from our own desire to cater to someone else’s wishes is thought to be a unique feature of human cognition.” In their study, long story short, the male and female were fed different diets separate from each other. The male could watch the female eat, and when they were finally placed together, he would pick out her favorite food to get to her, even though his favorite was also there. “However, when the female’s desire differed from the male’s, then he took his partner’s wishes into account, often feeding her the food that she desired. This ability to ascribe to another individual an internal life-like one’s own and at the same time understand that the other’s internal, psychological states might differ from one’s own is called state-attribution.” “As humans, we ‘put ourselves into someone else’s shoes’ in order to respond to what the other person wants. Although we are biased by our own current desires,…”

This is My commandment, that you love one another as I have loved you. (John 15:12 NKJV)

Therefore let us pursue the things which make for peace and the things by which one may edify another. (Romans 14:19 NKJV)

For you, brethren, have been called to liberty; only do not use liberty as an opportunity for the flesh, but through love serve one another. (Galatians 5:13 NKJV)

And may the Lord make you increase and abound in love to one another and to all, just as we do to you, so that He may establish your hearts blameless in holiness before our God and Father at the coming of our Lord Jesus Christ with all His saints. (1 Thessalonians 3:12-13 NKJV)

Therefore comfort each other and edify one another, just as you also are doing. (1 Thessalonians 5:11 NKJV)

The verses on this page should help us remember how we are supposed to put others first in our lives.

Is the Eurasian Jay a Bird of the Bible? I think so. How about you? Let us learn his lesson. 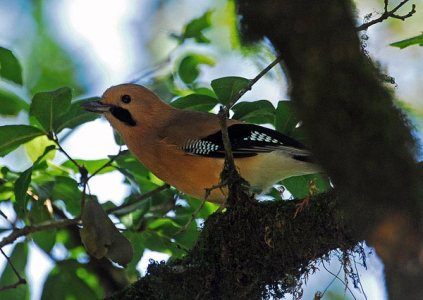 And let us consider one another in order to stir up love and good works, (Hebrews 10:24 NKJV)

Since you have purified your souls in obeying the truth through the Spirit in sincere love of the brethren, love one another fervently with a pure heart, (1 Peter 1:22 NKJV)

The Eurasian Jay (Garrulus glandarius) is a species of bird occurring over a vast region from Western Europe and north-west Africa to the Indian Subcontinent and further to the eastern seaboard of Asia and down into south-east Asia. Across its vast range, several very distinct racial forms look very different from each other, especially when forms at the extremes of its range are compared.

The bird is called jay, without any epithets, by English speakers in Great Britain and Ireland. It is the original ‘jay’ after which all others are named. (Wikipedia with editing)

The Jays belong to the Corvidae – Crows, Jays Family. There are 130 species in this family.

Finally, all of you be of one mind, having compassion for one another; love as brothers, be tenderhearted, be courteous; (1 Peter 3:8 NKJV)

Be hospitable to one another without grumbling. (1 Peter 4:9 NKJV)

3 thoughts on “Birds of the Bible – Eurasian Jay?”