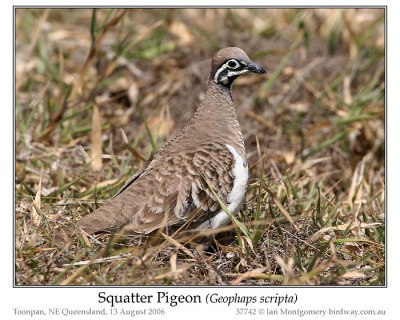 The series of raptors from Europe is perhaps a hard act to follow, so here is something quite different from much closer to (my) home: the Squatter Pigeon,an attractive ground pigeon not uncommon in the drier areas of northern Queensland. Its range used to extend to northern New South Wales, but it is very rare or extinct there and has declined in southern areas of Queensland. The reasons for its decline are not clear but is thought to be due to grazing pressure and perhaps predation by foxes and feral cats.

Toonpan, a short drive south of Townsville on the Flinders Highway is a good spot for this species. When Ross River Dam was built, part of the highway between Toonpan and Townsville was flooded and a new highway was built on higher ground. The old highway still exists and is a quiet roadway through grassland, popular with birders. The habitat in the second photo – taken from the ebook Where to Find Birds in North Queensland – may look uninspiring, but can be very productive often producing other such specialties such as Australian Bustard, various finches including Black-throated and, in winter on powerlines, Red-backed Kingfishers.

It’s not clear where the name Squatter Pigeon came from, presumably either from its habit of crouching and freezing when disturbed or because of its association with the cattle stations, the original occupants of which were called squatters. It was originally named by the Dutch zoologist Temminck in 1821 and he seemed very taken with it. Like Bonelli in the previous Bird of the Week, he published in French, calling it the Colombe marquetée and describing how each patch of white on the face was framed with black, producing an effect like ‘a sort of marquetry. He gave it the scientific name Geophaps scripta, meaning ‘ground pigeon with writing’, ‘phaps’ being the Greek for pigeon. Temminck, incidentally, named many species of animals and various others were named in his honour, such a Temminck’s Stint.

Sometimes you can see the iridescent feathers on the wing, third photo, a display feature shared with other ground pigeons notably the Bronzewings These feathers are usually hidden in Squatter Pigeons except in display and flight. The body shape is broken up by the white stripe between the breast and the wings, and the black and white facial markings disguise the head and make the eye less conspicuous. Squatter Pigeons nest in a scrape on the ground, so camouflage is important and it is easy to appreciate that a motionless bird crouching on the ground would be quite hard to spot. 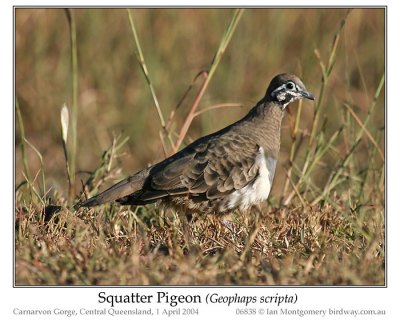 If you look carefully at both bare facial skin of both the Toonpan bird and the one in the third photo taken much farther west along the Flinders Highway, you’ll see the the skin is mainly pale blue around the eye with some pink at the edges in front and behind the eye. Two races of Squatter Pigeon have been described, with the nominate southern race having completely blue facial skin – fourth photo near Carnarvon Gorge – and a Cape York race peninsulae having reddish facial skin. The two races are not geographically well-defined and there is a broad band of intergradation with mixed blue and pink in the Townsville area.

Photos five and six show examples of the Cape York race. Both Marys Farms and the Mitchell River catchment are in the Mount Carbine district south of Cape York proper. The bird in the last photo is perched fairly high in a tree, just to prove that it will sometimes take refuge in trees.

It is the blue-faced southern race that has declined most and is regarded as ‘vulnerable’. The Cape York race and the hybrids in the Townsville district are still reasonably common. The Partridge Pigeon, G. smithii, replaces it in northwestern Australia. It also has races with different coloured faces, red in the Top End of the Northern Territory and yellow in the Kimberley district of northern Western Australia. It has also declined. Although I have seen it in Kakadu National Park I haven’t yet photographed it.

“Behold, I send you forth as sheep in the midst of wolves: be ye therefore wise as serpents, and harmless as doves. (Matthew 10:16 KJV)

I like the markings on their faces. They are interesting, yet, it doesn’t keep them from being camouflaged.

“The Squatter Pigeon (southern) is a medium-sized, ground-dwelling pigeon that measures approximately 30 cm in length and weighs about 190-250 g. The adults are predominantly grey-brown, but have black and white stripes on the face and throat, blue-grey skin around the eyes, dark-brown (and some patches of iridescent green or violet) on the upper surfaces of the wings, blue-grey on the lower breast and belly, white on the lower region, flanks of the belly and extending onto the under surfaces of the wings, and a blackish-brown band along the trailing edge of the tail. They have black bills, dark-brown irises, and dull-purple legs and feet. The sexes are similar in appearance (Higgins & Davies 1996).

Juvenile Squatter Pigeons (southern) can be distinguished from the adults by their duller colouring, the patchy, less distinctive appearance of their black and white facial stripes, and the paler colouring (buff to pale-yellow) of the facial skin (Higgins & Davies 1996).

One thought on “Ian’s Bird of the Week – Squatter Pigeon”