Vermilion Flycatchers: Watching from Above

For the ways of man are before the eyes of the Lord, and He pondereth all his goings.  (Proverbs 5:21)

The eyes of the Lord are in every place, beholding the evil and the good  (Proverbs 15:3)

As our providence-giving Creator, God surveys (and interacts with) all of the world, watching from above. Yet many small parts of the earth are also “watched from above”, by many of the smallest creatures that God made on Day #5 –  the birds of the air, such as the Vermillion Flycatcher.

If you catch flies (or dragonflies!) for a living, you must fly yourself – quickly, darting here and there. Also, before nabbing an airborne lunch, you must perch and wait  —  attentively watch for it to appear within snatching distance, then go get it! In other words, before you catch, you need to “watch from above” – and that is what wary Vermilion (also spelled “Vermillion”) Flycatchers do.

“Catching flies” is a feat that many outfielders perform in baseball parks, but the real flycatchers (i.e., the tyrant flycatcher family of perching birds, known as Tyrrannidae) rely on snatching their aerial insect prey as their primary dietary habit  —  and the colorful Vermilion Flycatcher (Pyrocephalus rubinus) is no exception.  In addition to flying insects (such as flies, wasps, honeybees, damselflies, and dragonflies), this tyrant flycatcher happily eats jumping insects (such as grasshoppers and crickets) and crawling bugs (such as beetles, spiders, and termites).

The ability of birds to watch “from above” is well-known. In fact, a 8-year-old poet (Sydney) recently alluded to that trait, in her succinct free verse:

Fun colors, flying, watching from above.

Actually, it is the male of the species that is so strikingly colorful —  with its bright scarlet head crest (which matches its technical name, meaning “fiery-head”), forehead, and neck, and its belly’s stark vermilion plumage  —  contrasted against its dark UPS-truck-brown eye-shadow “mask”, wings and tail.  (Vermilion, as a color, is a synonym for scarlet, perhaps connoting a hint of cinnamon-like orange shading, as in the mercury sulfide-dominated cinnabar pigment historically used by painters  —  see Jeremiah 22:14 & Ezekiel 23:14, KJV, referring to vermillion as a bright pigment painted on paneling).

In drab contrast, the females have brown-grey plumage atop, with a whitish underside, featuring a whitish breast with mottled grey streaks, down to a lower belly of pinkish-peach plumage – somewhat like a juvenile Scissor-tailed Flycatcher, except the female Vermilion Flycatcher’s head is dark brown-grey. [See Roger Tory Peterson & Virginia Marie Peterson, A FIELD GUIDE TO WESTERN BIRDS (Boston: Houghton Mifflin, 1990), pages 230-231 and map M251.]  The Vermilion Flycatchers are relatively small birds, being only a fraction longer than 5 inches, and typically weighing less than a half-ounce!

So where do Vermilion Flycatchers live? These aerial insectivores range widely in America’s Southwest  (mostly in the southern parts of California, Arizona, New Mexico, and Texas) and almost all of Mexico, plus southward into Central America (and even a few parts of South America).  Thus, the Vermilion Flycatcher is a year-round resident of the Chihuahuan, Sonoran, and Mojave Deserts.  Although the Vermilion Flycatchers generally prefer warm desert and semi-desert climes, they sometimes breed a bit north of their usual range, during spring-summer  —  such as in southern Nevada, where a pair was observed in the Great Basin scrubland near Reno, during mid-May of AD1981.  [See Fred A. Ryser, Jr., BIRDS OF THE GREAT BASIN (Reno: University of Nevada Press, 1985), page 346.]

A wide-ranging bird, this usually warm-climate passerine has even been observed crossing America’s northern border, up into Canada — and now there is even a webcam-verified report (4-17-AD2017) of a stray in Maine, on Hog Island [ see http://www.audubon.org/news/maines-first-verified-vermilion-flycatcher-captured-live-hog-island-web-cam ]!

Geographically, speaking, what kind of habitats can be settled as “home” by Vermilion Flycatchers? Most places with adequate room for flying, and spying flies, will suffice, such as open meadows, farmland, ranchland, semiarid prairies, sagebrush-sprinkled scrublands, and brushy areas near water, such as desert streambanks, pond-edges, and mud-puddles  — i.e., wherever insects often congregate.  Their nests are known be constructed in cottonwoods, mesquites, oaks, sycamores, willows, especially alongside streambanks.

Accordingly, as Pyrocephalus rubinus “watches from above” (with its “fun colors”, like the bright vermillion mentioned in Jeremiah 22:14),  we are reminded of how God Himself watches us from above,  providentially providing our lives with color and action and beauty,   —  maybe someday even including an opportunity to view a pair of Vermilion Flycatchers in America’s Great Southwest.      ><>  JJSJ 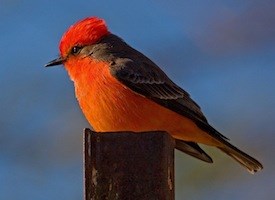 5 thoughts on “Vermilion Flycatchers: Watching from Above”