Birdwatching at Staffa, near Iona: Puffins, Shags, and Herring Gulls

Let them give glory unto the Lord, and declare his praise in the islands.  (Isaiah 42:12)

The three birds that I recall most, from visiting the island of Staffa (Inner Hebrides, just north of Iona) were Herring Gulls (a very common seagull),  Shags (a yellow-mouthed but otherwise all-black cormorant), and those cute and colorful (and comically clown-like) Atlantic Puffins, a couple of which settled (after some aerial arcing) not much more than a yard (i.e., meter) form where I was standing, upon the grassy cliff-side of the pasture-topped island.

Below is a limerick I wrote to recall my observations at the Isle of Staffa (same island that has Fingal’s Cave, made famous by Felix Mendelssohn’s overture written in AD1829), a small uninhabited island north of Iona (where I ate some of the best sea scallops, after soaking my feet in the cold Sound of Iona tidewaters!), in the Inner Hebrides archipelago on the western side of Scotland (July 19th AD2019).  Norse Vikings were reminded of staves (plural of “staff”) when they saw the upright timber/log-like columns (contiguous pillars) of basalt there  —  hence the name “Staffa“.

Launch from cliff-edge grass and crags;

Flying low — then a splish!

Herring gulls, of course, I first observed during my boyhood days (in elementary school).  But shags and puffins are not seen in the parts of America where I have lived, so seeing them at Staffa was quite a privilege! 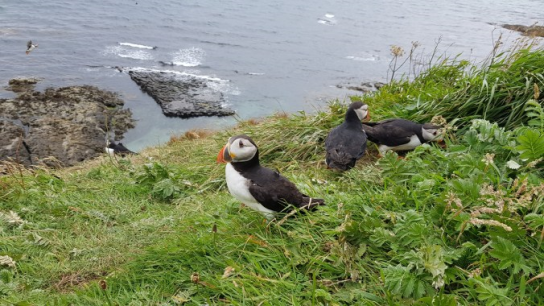 POST-SCRIPT:   Puffins, gulls, and shags  —  as noted (in the limerick, above)  —   enjoy eating fish, from the sea-waters that wash ashore coastal rocks and beaches of the Hebrides.   Meanwhile, to consider what humans enjoy eating, when visiting Scotland’s Highlands and Hebrides,  check out “When in Scotland, Eat Well!”  —  posted at https://rockdoveblog.wordpress.com/2019/07/29/when-in-scotland-eat-well/  .