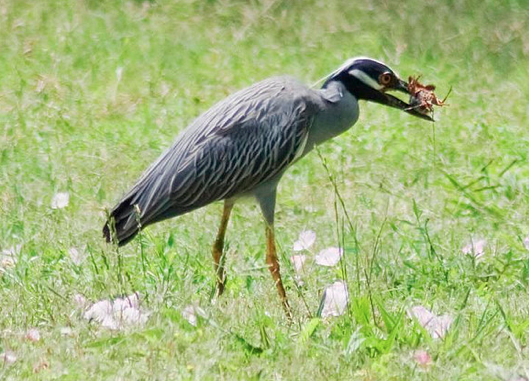 He sends forth His commandment upon earth; His word runs very swiftly.  (Psalm 147:15)

Do you usually think of God’s Word as “running very swiftly”? Maybe not, but the psalmist portrays God’s commandment as being sent forth with a speed that is so fast it is comparable to someone running.  In fact, God rules the world’s weather by issuing meteorological mandates that are executed with lightning-like rapidity:

He gives snow like wool; He scatters the hoarfrost like ashes. He casts forth His ice like morsels; who can stand before His cold?  He sends out His word, and melts them; He causes His wind to blow, and the waters flow. (Psalm 147:16-18)

When we think of running, we think of fast motion. Young children and young adults run; old folks like to walk (Isaiah 40:31).  Of course, lots of animals move pretty quickly, too.  Legs are pretty important, if you want to do any serious running around!

The fastest-footed bird of Africa is the Ostrich, a running ratite with a galloping gait. Here in Texas (where I live), we have a much smaller bird, nonetheless swift-legged, the Greater Roadrunner.  Earlier this evening I saw two Roadrunners scooting around by the east side of my house – may God bless them as they hunt snakes and other varmints!

Speaking of varmints, there are varieties of rodents that run around quite nimbly – mice, rats, squirrels (which I don’t really consider “varmints” unless they are chewing electrical system components), voles, prairie dogs, etc.  Rabbits (and other lagomorphs, like the Pikas of the Rocky Mountains) can move with serious speed, especially when fleeing in fear when chased by a predator.

Many of the larger mammals can hoof it – pronto! — such as the fleet-footed pronghorn of the prairie plains (or its antelope-like “cousins”, Africa’s gnu and India’s blackbuck) or feral felines like North America’s cougars (or Africa’s lions and cheetahs).  Even Australia’s kangaroos can hop at speeds over 40 m.p.h., like race-horses.  Actually, as goofy as moose sometimes look, don’t casually assume that you can outrun them  —  especially if turf-defending attitude is an issue (and I recall that cautionary caveat as one once nicknamed “Dances with Moose”).

Yes, even at tidal beaches there are a lot of God’s creatures that can scurry furtively about. Consider, for a moment, the decapod crustaceans we call “crabs”. There are many different varieties of crabs (Ghost Crabs, Chesapeake Bay Blue Crabs, Fiddler Crabs, Dungeness Crabs, Tanner Crabs, King Crabs, etc.) – and they have nimble legs for swift and purposeful maneuvering, both on land or in water!

Yet what if those crab legs are rudely amputated?   –  the crab becomes near-hopelessly vulnerable to a quick end, inside a decapod-dining predator.  No running away then!

Which leads us (“finally”, you say) to our featured bird of the day, the YELLOW-CROWNED NIGHT HERON, because it is known to seize upon and amputate crab legs, prior to consuming its hapless crustacean prey.

Although night-herons are named for their habit of hunting from dusk until dawn, the Yellow-crowned Night-Heron quite commonly also hunts through daylight hours [if it’s not sleeping!], particularly when there are hungry mouths to feed [sound familiar, parents?].  Its secretive habits, choice of dense, concealing habitats and nearly motionless hunting strategy combine to make this bird a challenge to locate and observe.  The Yellow-crowned Night-Heron’s partiality for crustaceans has earned it the name “Crab-Eater” in some parts of its [almost exclusively coastal] range.  It will typically grab a crab by its legs or pinchers [!] and shake vigorously until these fall off, making the crab more manageable.   [Quoting Wayne R. Petersen& Rogers Burrows, BIRDS OF NEW ENGLAND (Lone Pine Publishing, 2004), page 100, emphasis added.] 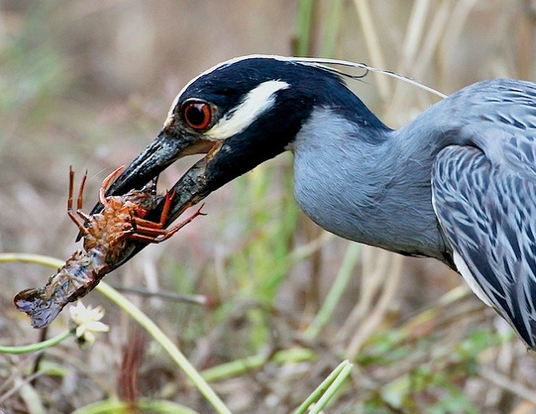 So, if the caught crab is too big to swallow, shedding a few appendages might reduce it to an ingestible size – and then “down the hatch” it goes!  Also, if the seized crab were to fall out of the heron’s beak-grasp (onto the beach), while the bird was trying to position the struggling crab for swallowing it, a legless or crippled crab (if dropped) will have quite a challenging time trying to make a successful getaway!

Wow! That gives a new twist to the phrase “shake a leg!”

By the way, how did the Yellow-crowned Night-Heron know that thrashing and breaking off crab legs was a good strategy to reduce a crab in size, for more-manageable swallowing?  — or a good strategy for preventing the crustacean prey from escaping if dropped?  — or a good strategy to diminish a crab’s ability to resisting being eaten?  The night heron’s targeted practice of immobilizing the crab is not just behavioral “dumb luck”!  God designed the bio-machinery and behavioral abilities of the bird.  God taught (i.e., programmed the “software” that drives the “hardware” of) the heron how to quickly catch, keep, and consume its shellfish snack.  Crunch! Crunch!  Crunch! GULP!

Just another eye-catching example of God’s creation in action, appreciating a few small details within a super-complicated-and-interactive coastal food web  —   with all of these interactive details, both  separately and together, exhibiting our great God’s ecological and bioengineering genius, as His critters live to be “fruitful, multiply, and fill the earth”. God is really, really clever! 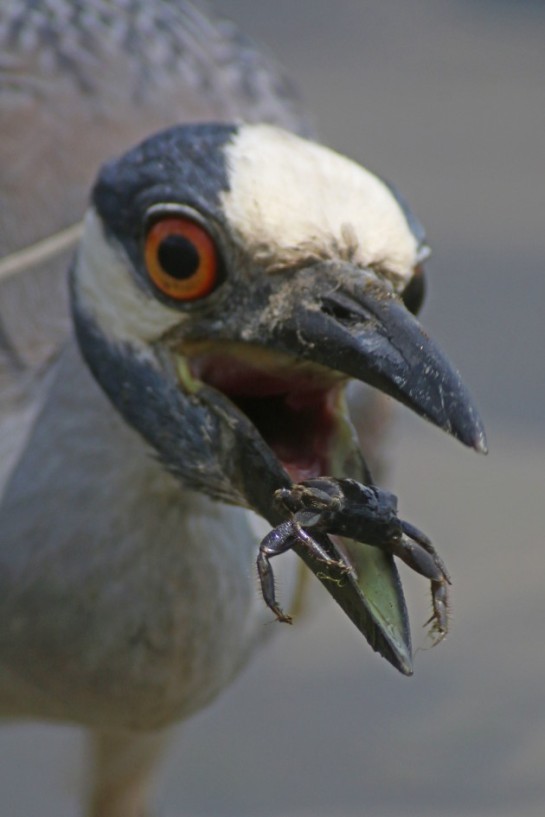