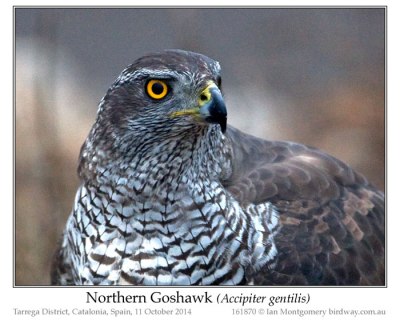 Ian’s Bird of the Week – Northern Goshawk  by Ian Montgomery

I got so absorbed in recounting my experiences in Catalonia, that I forgot to mention that I’ve been home in North Queensland for several weeks.

The piece about the effects of diclofenac prompted some interesting responses. It was pointed out that it causes kidney not liver failure in vultures, my apologies, and that a safe and effective substitute in both humans and livestock is the anti-inflammatory meloxicam. It’s sold here as Mobic, which I take sometimes when I wayward spinal disc misbehaves. I also received a link to this article by the Vulture Conservation Foundation which has managed to get the EU to do an investigation into the effects of diclofenac: http://www.4vultures.org/our-work/campaigning-to-ban-diclofenac-in-europe/.

On the second day of our stay in raptor country in the Pyrenees with Birding in Spain we – my sister Gillian joined me for this one – were taken by Steve West to a hide at a Northern Goshawk feeding station before sunrise – goshawks are earlier risers than I am normally and are shy. Here the goshawks are fed regularly on chicken carcasses and fresh pigeon, the product of a culling programme by the local council. It was a misty, chilly, gloomy morning – sunrise was the time of day rather than an event – and the first bird to arrive, the adult female in photos 1 and 2, was barely visible. The second photo was taken at 1/3 of a second exposure at 1600 ISO and my tripod, inconvenient for travel, proved its worth yet again. 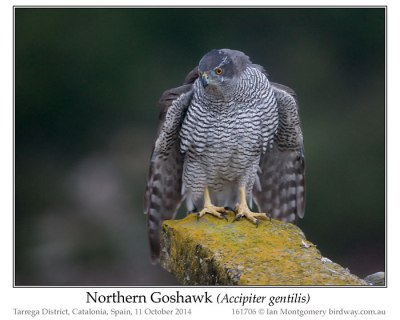 Adult females are more strongly barred and much larger than males (to protect succulent-looking nestlings). This one is partially spreading its wings and tail near the food in a posture that looks like a rudimentary ‘mantling’ display. This is usually used by hawks as a threat display to discourage other ones from interfering with their prey. In this case, I suspect it was signalling the presence of food to the juvenile goshawk, third photo, who appeared shortly afterwards. First year juvenile Northern Goshawks are brown with buff, almost cinnamon underparts and are streaked rather than barred. Similar juvenile plumages occur in other close relatives in the Accipiter genus such as the Brown Goshawk (A. fasciatus) and Collared Sparrowhawk (A. cirrocephalus), both common in Australia; see http://www.birdway.com.au/accipitridae/brown_goshawk/source/brown_goshawk_32464.htm and http://www.birdway.com.au/accipitridae/collared_sparrowhawk/source/collared_sparrowhawk_62859.htm for examples of their juvenile plumage. Note, incidentally the ‘beetle-brow’ characteristic also of the Brown Goshawk that gives the larger goshawks their fierce expression. 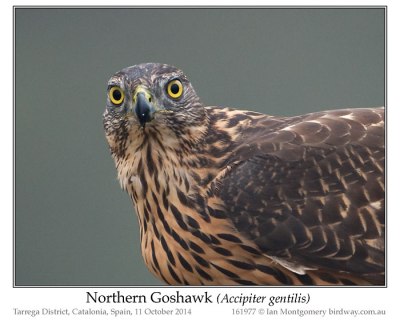 The adult female moved aside and let the juvenile have the pigeon prey and the juvenile then adopted the possessive mantling display with spread wings and tail and fluffed-out feathers of the mantle, just below the neck. 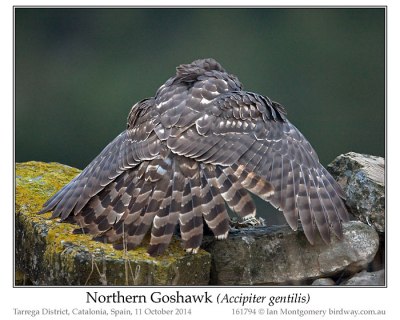 Mother, I presume, tackled a piece of chicken carcass and carried it down onto the ground closer to the hide, but partially obscured by dried grass and other vegetation. 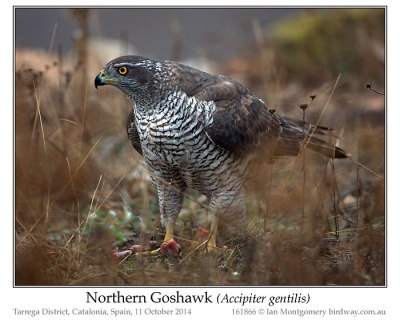 The sixth photo shows the juvenile somewhat later with the remains of the pigeon. This was a very large bird too, as you can perhaps judge from its appearance, so I concluded that it was female too. ‘Huge’ is perhaps a better description, as the Northern Goshawk is easily the world’s largest of the nearly 50 or so species of Accipiter – (typical hawks comprising larger goshawks and smaller sparrowhawks, though ‘hawk’ is also used in North America to name other raptors such as those in the genus Buteo aka ‘Buzzard’ in British English). The female is up to 65cm/26in in length with a wingspan of up to 120cm/47in and a weight of up to 2.0kg/4.5lb, comparable in size with many Buzzards. All the Accipiter hawks tackle relatively large prey, mainly birds and some mammals. They hunt by surprise and pursuit and have rounded wings, long tails and fast reflexes for great manoeuvrability in forests. I suspect that Linnaeus used the specific moniker ‘gentilis’ in the sense of ‘noble’ rather than ‘gentle’. ‘Goshawk’ comes from the Old English ‘göshafoc’ meaning goose hawk, no mere chicken hawk. 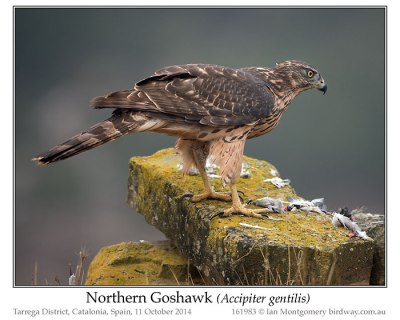 This was another species that had aroused my interest in my field guide as an Irish teenager, and hadn’t seen before this trip. It’s a very rare vagrant in Ireland and was then only an occasional breeder in Britain though widespread if uncommon elsewhere in temperate regions of the Northern Hemisphere. Since then it has become re-established in Britain with a breeding population of 300-400 pairs. 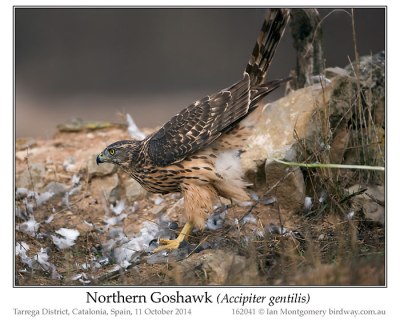 Both birds lightened their load, as many raptors do, before taking flight, as the juvenile is doing in the seventh photo. There’s a photo on the website of the female doing the same thing: http://www.birdway.com.au/accipitridae/northern_goshawk/source/northern_goshawk_161882.htm. Even nobles have to perform basic functions: don’t stand behind or below a well-fed raptor :-).

What a beautiful family of birds. Ian always has such great photos and adventures to share with us. Thanks, Ian.

Birds of the Bible – Peregrine Falcon and Goshawk 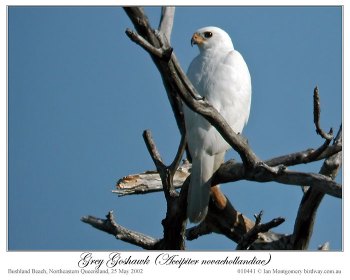 Ian’s Bird of the Week – Grey Goshawk ~ by Ian Montgomery

*
Here is an uncommon and beautiful raptor, the Grey or Variable Goshawk. It is usually called the Grey Goshawk in Australia but the moniker Variable is more accurate as it occurs in both grey and white morphs. The first photo shows a white morph bird perched in a dead tree near mangroves at Bushland Beach near Townsville, photographed in 2002.

It is the only completely white raptor worldwide, though white morph birds may show some grey on the tail – as this one does – and on the head. These are large hawks, with the females being 50-55cm/20-22in in length with a wingspan to 1.1m/43in. The smaller males are 38-42/15-16.5in. By way of comparison – the choice is deliberate – the Sulphur-crested Cockatoo is 44-51cm with a comparable wingspan of about 1m. Despite their size, they are difficult to see (and to photograph) as they inhabit mainly dense forest, or forest edges and are shy, so it would be another ten years before I got an even vaguely respectable photo of a grey morph bird, second photo. 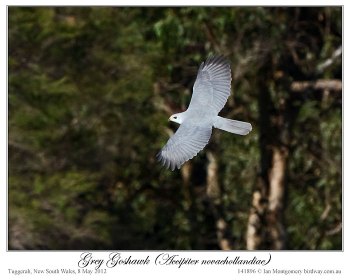 Here you can see how broad and rounded the wings are. This shape is ideal for short glides and rapid braking and is an adaptation for the preferred hunting strategy of this species, called ‘still hunting’ – perching on a well-hidden perch and making short, devastating swoops on unsuspecting prey feeding on the ground or in trees. Prey includes birds, mammals and reptiles and a female can take prey up to the size of herons, rabbits and possums. Goshawks are subject to mobbing by small birds, and the when the individual in the second photo landed on a tree stump several seconds later (12 to be exact) it immediately attracted the attention of a Willie-wagtail visible in flight near the goshawk in the third photo. 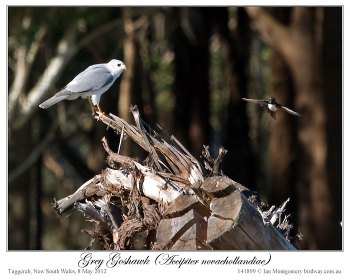 You might recall that pied plumage is often the hallmark of aggressiveness – the reverse of camouflage – and this Willie-wagtail actually landed on the tree stump as in the third photo. The Goshawk gives the appearance of having lost interest in the Willie-wagtail, but I suspect that it was more concerned with preparing to take flight as I approached it trying to get a closer shot, which it did very shortly afterwards. 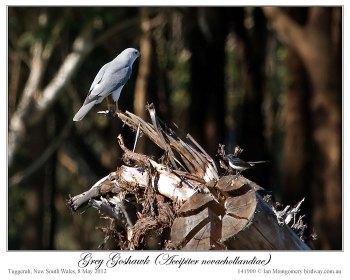 I mentioned Sulphur-crested Cockatoos before as it has been suggested that the white morph has evolved to mimic Cockatoos to escape detection, but this theory has never been proven. It is thought that genetically the white morph is simply a single recessive gene, like Mendel’s sweet peas, as white-white mating produces white offspring, while white-grey and grey-grey can produce either. There is supposed to be geographical variation in the proportion of the morphs, with the white one being predominant in northern Australia, Tasmania and western Victoria and the grey morph being predominant in eastern Australia. Despite the specific name novaehollandiae, it isn’t an Australian endemic and also occurs in New Guinea and neighbouring islands, though the island races are sometimes treated as separate species.

Wow! Another beautiful bird! I really enjoy Ian’s Newsletters. They tell about birds that many of us never see or even hear about. Then again, we tell about American birds and to others, those are probably just as fantastic to hear about. Ian has managed to travel around the world in search of birds to photograph. Check out his website, Birdway, to enjoy his photos.

The Goshawk is one of the Birds of the Bible and was not to be eaten, but this one is such a beauty, I wouldn’t dream of eating it or hurting it anyway.

The Goshawks are part of the Accipitridae – Hawks & Allies Family. Check out Ian’s 47 members of the Hawks, Eagles & Allies and then the whole list of 255 species in the family listed here.