Curse not the king, no not in thy thought; and curse not the rich in thy bedchamber: for a bird of the air shall carry the voice, and that which hath wings shall tell the matter.   (Ecclesiastes 10:20)

King Solomon warned us!  Some birds are like winged tape recorders, capable of imitating the speech of human voices, vocal calls of other birds, diverse sounds of construction equipment, and even the beeping noise of a clock alarm.  Parrots are so famous for repeating human speech that we use the word “parrot” as a metaphoric verb, for repeating what someone else says.

The official state bird of Texas is a famous mimic, as its name suggests: MOCKINGBIRD.  (And, besides the special dignity of being the Lone Star State’s official songbird, the Northern Mockingbird is a special of Professor Ernie Carrasco!)

Despite its prosaic plumage, which combines only black, grey, and white (and thus misses out on all of the rainbow hues), the mundanely feathered Northern Mockingbird (Mimus polyglottus) is nonetheless spectacular in its mimicry range of vocal versatility.  To illustrate, consider this report from Beth Clark, a Nevada resident, writing for BIRD & BLOOMS magazine:

‘BEEP, BEEP, BEEP, BEEP.’ My husband and I were participating in the Nevada Bird Count for the Great Basin Bird Observatory, when he started having problems with his new wristwatch timer. It kept beeping ahead of its programmed time.  I assumed [as many wives would have assumed, that] he just needed to read the instructions.  But after several frenzied attempts to fix the device, it turned out that a northern mockingbird was in the area.  The bird was perfectly imitating the sound and volume of the timer.

[Quoting Beth Clark, “Expert impersonators:  Sounds Aren’t Always What They Seem”, BIRDS & BLOOMS, April-May 2006 issue, page 49.]  Surely no one should be shocked to learn that a mockingbird is apt to “mock” sounds, as if it was a winged tape recorder.

Interestingly, it is only the male mockingbird that you should expect to hear during springtime or summer, as busy mockingbirds go about the business of nest-building, breeding, and taking care of their nestling young.  During autumn, however, both males and females sing their mimicking “songs” and sounds.  [See, accord, Donald Stokes, “Mockingbird”, A GUIDE TO BIRD BEHAVIOR, Volume I (Little, Brown & Company, 1979), page 187.]  Interestingly, mockingbird singing is influenced by the lunar cycle.

Northern Mockingbirds sing all through the day, and often into the night. Most nocturnal singers are unmated males, which sing more than mated males during the day, too. Nighttime singing is more common during the full moon. Northern Mockingbirds typically sing from February through August, and again from September to early November. A male may have two distinct repertoires of songs: one for spring and another for fall. The female Northern Mockingbird sings too, although usually more quietly than the male does. She rarely sings in the summer, and usually only when the male is away from the territory. She sings more in the fall, perhaps to establish a winter territory.

[Quoting Cornell Lab of Ornithology’s “All About Birds” article on mockingbirds.

Of course, other birds have the same ability.

Northern mockingbirds, gray catbirds and the thrasher family are the most common mimics in North America. The mockingbird is the most accomplished mimic of the group [called Mimidae].  Its imitations are executed so precisely that scientific analysis often can’t distinguish between the imitation and the original.

Mockingbirds can replicate the calls of up to 32 bird species as well as the sounds of [large] animals and insects, and a wide array of human noises. You might even hear mimics imitating birds you’ve never heard of.  Once mimics learn a phrase, they’ll use it throughout the year.  So they easily pick up new bird songs from their wintering grounds [JJSJ note: some mockingbirds migrate, while other are year-round residents  — see range map below].  In New Jersey, someone once heard a gray catbird mimicking a brown-crested flycatcher [vocalization] that it likely picked up in Central America.

[NOTE CONTRA:  Cornell Lab of Ornithology indicates a year-round range for all the lower 48!]

Of course, it’s not just mockingbirds that mock the sounds of other creatures and non-living noises.

Brown thrashers … can learn human words and phrases, and sage thrashers imitate a variety of natural sounds. The European starling is a phenomenal mimic.  In addition to the human voice and other man-made sounds, it will reproduce the sound of a woodpecker drumming.  I once heard a caged European starling that spoke clearly and sang several radio jingles with perfect pitch.  Jays, crows, Carolina wrens, shrikes and vireos also mimic other bird species.

But how do these avian mimics replicate the sounds of others? They have a special vocal organ called a “syrinx”, a word derived from the Greek word σύριγξ – referring to musical reeds (i.e., “pan pipes”), which is the same root for our English word “syringe” (a reed/straw-like tube, used in medicine).

Birds make sounds in a different way than humans do. People vocalize by passing air across the vocal chords.  Birds, however, make sounds using their syrinx.  Birds are the only animals that have a syrinx, which is located in the windpipe, close to the lungs.  The muscles surrounding the syrinx allow the birds to control the sounds, much the way changing tension on a violin string alters the pitch.  They control the volume by changing the air pressure in their lungs.  Generally, the birds with the most muscles around their syrinx are the most varied [i.e., most versatile] vocalists.  For instance, while pigeons have a single pair of muscles [around the syrinx], catbirds and crows have seven to nine pairs.  Most songbirds have about five pairs.  That explains how a northern mockingbird tricked my husband into thinking his timer was broken, but the bird’s amazing array of impersonations remains mind-boggling. 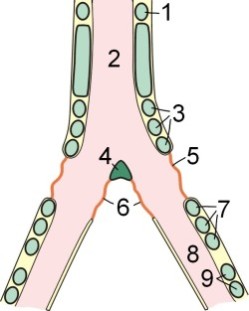 Schematic drawing of an avian syrinx

How can you attract hungry mockingbirds?  Don’t worry; northern mockingbirds aren’t “fussy” eaters. As omnivores, they will eat what is available:  insects (especially during summer, when beetles, ants, wasps, bees, butterflies, and moths are the mockingbirds’ main diet), earthworms, berries and other fruits (especially apples), tomatoes, seeds, and even lizards.  Some have even reported mockingbirds sipping sap from trees recently pruned.   [See Cornell Lab of Ornithology’s “All About Birds” article on mockingbirds, posted at https://www.allaboutbirds.org/guide/Northern_Mockingbird/lifehistory .]

Once a mockingbird established its home territory, watch out! Mockingbirds will guard their claimed turf with vim and vigor.

It is hard for a behavior-watcher to think of mockingbirds and not also think of territoriality, for this is undoubtedly the most prominent aspect of this bird’s behavior. Not only are its territories small, sharply defined, and aggressively defended, but they are also formed twice a year – once in spring for breeding and again in fall to protect a winter food source.  Add to this the fact that [mockingbirds] are partial to living in urban [and suburban] areas, and you undoubtedly have the best of our common birds in which to observe territorial behavior.

So, enjoy the varied vocalizations of your neighborhood’s mockingbirds, but respect their territorial “turf”, because they are seriously committed to homeland security! 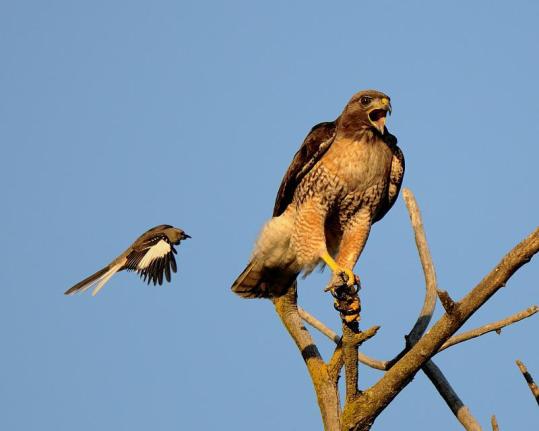