Likewise, ye husbands, dwell with them according to knowledge, giving honor unto the wife, as unto the weaker vessel, and as being heirs together of the grace  of  life,  that  your  prayers  be  not  hindered.  (1st Peter 3:7)

Great Blue Heron – what a big, beautiful bird! These are the largest-sized and heaviest of North America’s herons – standing about 4 feet tall and weighing over 5 pounds (about 2½ kilograms). Because both sexes look alike, generally speaking, it is difficult to discern which is a male (versus a female).  However, when a pair is seen, expect the male have a slighter larger bill than his female.  (That’s a nice way of saying that males have noticeably bigger mouths than their females.)

However, it is worth mentioning that the Great Blue Heron is unafraid of stereotypical male/female courtship and domestic roles  —  something that some “modern” folks get nervous about:

GREAT BLUE HERONS.  From exchanging twigs to flying in circles, great blue herons participate in a wide range of behaviors during courtship.  To construct the big, bulky nest, the male does most of the gathering of materials, picking up sticks from the ground … [or from other places in its “territory”].  The female does most of the work of putting the nest material in place [i.e., she takes care of the home’s interior decorating].  Pairs often reuse old nests [and have been doing this long before “recycling” became a fad], but if they build a new one, it can take three days to two weeks [although it probably takes longer if they are government contractors].

Where do they build nests? Inside trees and bushes, yes, but also in tall marshy weeds, or even on the ground.  Great Blue Herons are known to collect tree twigs from nearby trees, including some branch fragments that are too long to be useful as part of a nest, so many sticks are likely to fall to the ground before a pair of great blues get their nest built “just right”.  Other nest-building materials include a “lining” of pine needles, moss, grasses, cattail reeds, and/or leaf material.

In other words, these herons are as eclectic in nest-building as they are in sourcing their food. 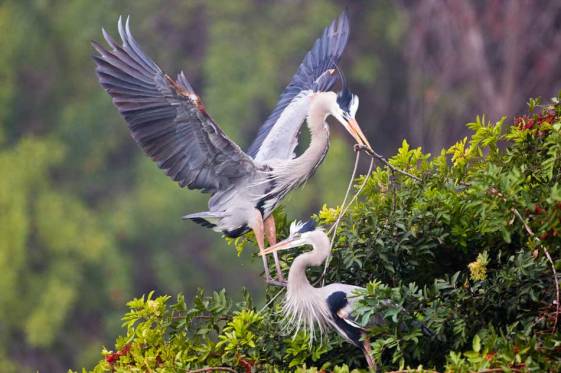 What’s right oft gets lost, in the throng

As home tasks come and go

May that difference forev’r live long !

So Great Blue Herons know the difference between male and female roles.

What a Biblical concept! As the French would say:  vive la difference!