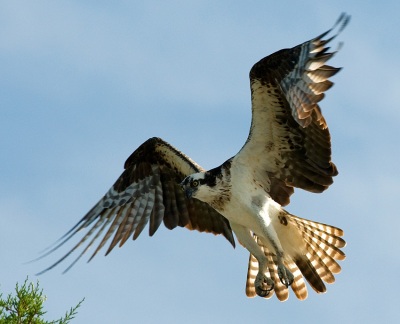 The Osprey or Ospray (depending on which version of Bible) listed in Leviticus 11:13 or Deuteronomy 14:12, gives an interesting challenge. According to my e-Sword Bible Program, an Osprey or ospray is listed in the ASV, BBE, Bishops, CEV, Geneva, JPS, KJV,  MKJV, RV, WEB, Webster, and YLT versions. Yet, the Darby calls it a sea-eagle. The ESV, GW, LITV, MSG, NASB, and the NKJV versions call it a type of Vulture. I am not sure why the different versions do that, but most of them call it the Osprey or sea-eagle which is another name used for it. The WhatBird article had this to say about it, “The Osprey, Pandion haliaetus–whose species name is derived from the Greek ‘hals’ (salt or sea) and ‘aetos,’ or eagle–is the only bird of prey that feeds exclusively on live fish.”
Smith’s Bible Dictionary says, “Osprey. The Hebrew word occurs in, Lev_11:13 and Deu_14:12, as the name of some unclean bird. It’s probably either the osprey, (Pandion haliaetus), or the white-tailed eagle, (Haliaetus albicella).”
Faussett Bible Dictionary says, “Ospray 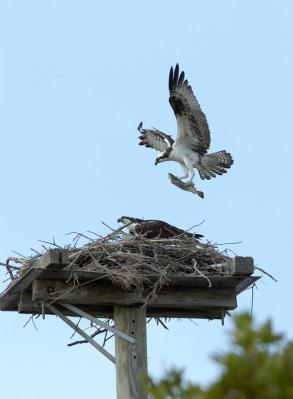 Osprey with Fish by Jim Fenton

ozniah (Lev_11:13; Deu_14:12). The sea eagle or fish hawk, Pandion haliaetus, the Septuagint. Or the short-toed eagle that feeds upon reptiles. The ossifrage (peres, means “the bone-breaker,” the lamergeyer, Gypaetus (eagle and vulture combined) barbatus, “the bearded vulture.” “Ospray” is a corruption of “ossifrage.” It flies in easy curving lines, and then pounces perpendicularly with unerring aim on a fish.”
International Standard BibleEncyclopedia says, “Ospray
os´prā́ (עזניּה, ‛oznīyāh; ἁλιάετος, haliáetos; Latin Pandion haliaetus): A large hawk preferring a diet of fish. The word is found in the list of abominations only. See Lev_11:13; Deu_14:12. The osprey was quite similar in appearance to some of the smaller eagles, and by some it is thought that the short-toed eagle is intended. But the eagle and the gier-eagle had been specified, and on account of the osprey plunging into water for food and having feet bare to the lower leg-joint and plumage of brighter and more distinctive marking, it seems very probable that it was recognized as a distinctive species, and so named separately. Moreover, the osprey was not numerous as were other hawks and eagles. It was a bird that lived almost wholly on fish, and these were not plentiful in the waters of Palestine. This would tend to make it a marked bird, so no doubt the translation is correct as it stands, as any hawk that lived on fish would have been barred as an article of diet (see Tristram, Natural History of the Bible, 182; also Studers, Birds of North America, p. 16).”
Webster says, Ospray
“OS’PRAY, n. [L. ossifraga; as, a bone, and frango, to break; the bone-breaker.]
The sea-eagle, a fowl of the genus Falco or hawk, of the size of a peacock. This is our fish hawk. It feeds on fish which it takes by suddenly darting upon them, when near the surface of the water.” 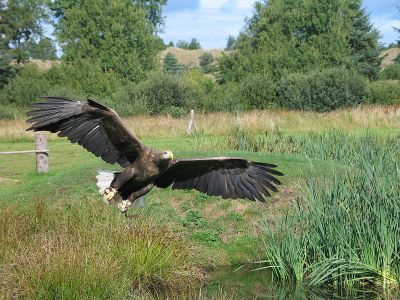 One thing most of them seem to be in agreement about, is that the bird is a fish eater. The Osprey’s diet consists almost exclusively of fish and God has created them with specialized feet and behaviors to assist them in their search for food. One of their biggest problems is the thievery of their catch by Bald Eagles. Dan and I have had the privilege twice to witness this event. Once years ago in Punta Gorda, Florida and just last month here in Winter Haven. Needless to say, the Osprey gets very upset, but both times, they lost. Do you think the Eagle knows the truth of Ephesians 4:28? (Replace hands with feet). Let’s make sure we don’t copy this improper behavior of the Eagle.

Let him who stole steal no longer, but rather let him labor, working with his hands what is good, that he may have something to give him who has need. (Eph 4:28 NKJV)

Original blog about the Osprey was Birds of the Bible – Osprey

See the Osprey Page for more information on the Osprey including Photos and Videos.

2 thoughts on “Birds of the Bible – Osprey II”