Somehow I overlooked the Swallows on the first go-around of the “Birds of the Bible” series. This blog hopes to correct that oversight.

To the Chief Musician. On An Instrument of Gath. A Psalm of the Sons of Korah. How lovely is Your tabernacle, O LORD of hosts! My soul longs, yes, even faints For the courts of the LORD; My heart and my flesh cry out for the living God. Even the sparrow has found a home, And the swallow a nest for herself, Where she may lay her young– Even Your altars, O LORD of hosts, My King and my God. Blessed are those who dwell in Your house; They will still be praising You. Selah (Psalm 84:1-4 NKJV)

Following are some quotes from Gill and Matthew Henry:

“III. His (David’s)  grudging the happiness of the little birds that made their nests in the buildings that were adjoining to God’s altars, Psa_84:3. This is an elegant and surprising expression of his affection to God’s altars: The sparrow has found a house and the swallow a nest for herself. These little birds, by the instinct and direction of nature, provide habitations for themselves in houses, as other birds do in the woods, both for their own repose and in which to lay their young; some such David supposes there were in the buildings about the courts of God’s house, and wishes himself with them. He would rather live in a bird’s nest nigh God’s altars than in a palace at a distance

from them. He sometimes wished for the wings of a dove, on which to fly into the wilderness (Psa_55:6); here for the wings of a sparrow, that he might fly undiscovered into God’s courts; and, though to watch as a sparrow alone upon the house-top is the description of a very melancholy state and spirit (Psa_102:7), yet David would be glad to take it for his lot, provided he might be near God’s altars. It is better to be serving God in solitude than serving sin with a multitude. The word for a sparrow signifies any little bird, and (if I may offer a conjecture) perhaps when, in David’s time, music was introduced so much into the sacred service, both vocal and instrumental, to complete the harmony they had singing-birds in cages hung about the courts of the tabernacle (for we find the singing of birds taken notice of to the glory of God, Psa_104:12), and David envies the happiness of these, and would gladly change places with them. Observe, David envies the happiness not of those birds that flew over the altars, and had only a transient view of God’s courts, but of those that had nests for themselves there. David … takes notice that these birds not only have nests for themselves there, but that there they lay their young; for those who have a place in God’s 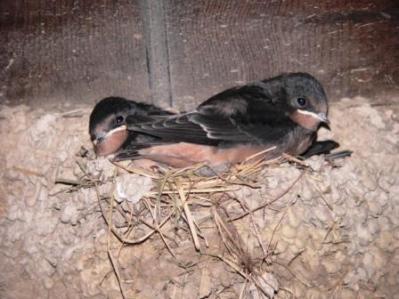 courts themselves cannot but desire that their children also may have in God’s house, and within his walls, a place and a name, that they may feed their kids beside the shepherds’ tents.” (Matthew Henry Commentary)

Like a flitting sparrow, like a flying swallow, So a curse without cause shall not alight.  (Proverbs 26:2 NKJV)

Like a crane or a swallow, so I chattered; I mourned like a dove; My eyes fail from looking upward. O LORD, I am oppressed; Undertake for me! (Isaiah 38:14 NKJV)  (This verse was mentioned in the “Birds of the Bible – Cranes” blog)

“Even the stork in the heavens Knows her appointed times; And the turtledove, the swift, and the swallow Observe the time of their coming. But My people do not know the judgment of the LORD. (Jeremiah 8:7 NKJV)  (This verse was covered in the “Interesting Things – A Lesson from the Stork” blog.)

Swallows are in the Hirundinidae – Swallows Family which includes Martins. “Within the Hirundiniae, the name ‘martin’ tends to be used for the squarer-tailed species, and the name “swallow” for the more fork-tailed species; however, there is no scientific distinction between these two groups.[1] The family contains around 83 species in 19 genera.” The subfamilies are: Saw-wings (including Square-tailed, Mountain, White-headed, Black and Fanti), Swallows (many including Barn, Bank, Cave Mangrove, Golden, etc), Martins (Purple, Cuban, Sinaloa, Brown-chested, etc.), Sand Martins (including Brown-throated, Congo, Pale, Banded).

The swallows are found on all continents except Antarctica with the largest diversity of species in Africa. They are found on many islands, as there are quite a few that migrate long distances. God has designed them with short bills, but with a wide mouth that has a strong jaw. This is useful in there hunt for insects which they catch on the wing. With their streamlined body and wings that are pointed, they are very maneuverable at great speeds. Their forked long tail, that has 12 feathers, helps them steer. They can range from 3.9-9.4 inches and weight between 0.4-2.1 ounces.

More information about Swallows can be found at: