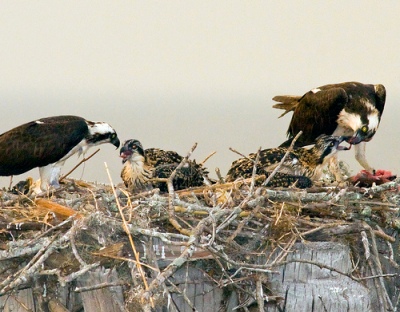 I decided to revisit the Osprey because they have been actively nesting in the area the last few months and also have some new photos to share. The photo to the right is neat in that both are working to feed the little ones. They usually mate for life. Normally the male does the fishing while the female guards the nest. The Ospreys were greatly endangered with DDT, but they are making a great recovery. For the first “Birds of the Bible – Osprey,” CLICK HERE

While preparing (with e-Sword) the above verse, I again reminded that not all the translations use “osprey or ospray”. Some use “vulture” (ESV, NASB, NKJV & others) and Darby uses “sea-eagle.” This was investigated in “Birds of the Bible – Osprey II.”

The research that is being done with the DNA of birds is changing the classification of several birds. The Osprey is being affected by these changes also. They were with the New World Vultures and now that is being rethought.

There are four subspecies of Osprey (Pandionidae):

Australia and New Guinea have an Pandion cristatus – Eastern Osprey  (non-migratory) They even have stamps with their photos. The smallest subspecies.

“Poole (1994) points to an interesting fact: despite its long history, Osprey has not evolved into different species.” I can believe that.

See the Osprey Page for more links, plus photos and videos. Osprey Photos 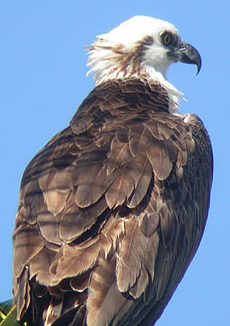 4 thoughts on “Birds of the Bible – Osprey III”