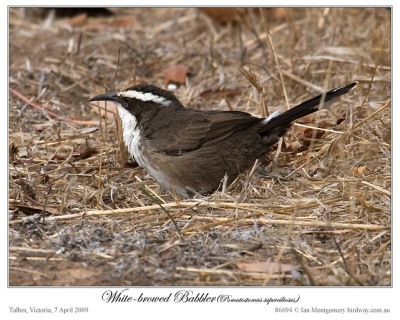 “If you had a bird popularity poll with Australian birders, I imagine that Babblers would do well. I hope so anyway, as it would show that pretty colours aren’t everything and character still counts in an often superficial world!

I photographed these White-browed Babblers when staying with friends in Talbot in rural Victoria northwest of Melbourne. This species is found in dry woodland in the southern half of the continent, mainly west of the Great Divide and south of the Tropic of Capricorn. Although wren-like in shape, they are much larger, the White-browed is 18-22cm./7-8.5in. in length and is the smallest of the four Australian species. 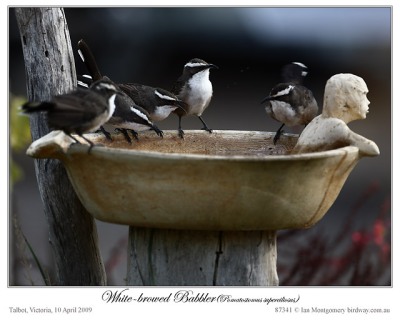 Babblers are highly social, noisy and exuberant. The live in groups of 3 to about a dozen and do everything together, including roosting, breeding and, as in the second photo, bathing. They build a number of domed nest in their territory; apparently only one of these is used for nesting, so the others are thought to be used for roosting. When disturbed by an observer, they chatter scoldingly, and move away, appearing to bounce rather than fly on their short wings. Their gregarious habits have earned them lots of common names such as Happy Family, Cackler, Go-aways, Twelve Apostles and Jumper, names applied rather indiscriminately to both this and the other widespread species, the Grey-crowned Babbler.

The four Australian species and a fifth found in PNG comprise the Australo-Papuan Babblers (family Pomatostomidae). These used to be included with the superficially similar Old World Babblers in the family Timaliidae http://www.birdway.com.au//timaliini/index.htm . It is now apparent that the two groups are not closely related.”

Please visit Ian Montgomery’s Birdway site for many interesting Birds of the World photography. He is a fantastic photographer. (Bolding by Lee)

Lee’s addition:
What an interesting bird and I love their common names – Happy Family, Cacker which bring to mind the following verses:

“The Australo-Papuan or Australian babblers are endemic to Australia-New Guinea. The Australo-Papuan babblers are medium-sized terrestrial birds with sombre plumage and long decurved bills. The wings are short and round, and the tail is long and often held fanned which makes it look broad as well. The feet and legs are strong and adapted to a terrestrial existence. There is no sexual dimorphism in the plumage, which is composed of brown, russet and grey colours, often with striking white markings on the face and throat. The plumage of juvenile birds is similar to that of adults.
Five species in one genus are currently recognised, although the red-breasted subspecies rubeculus of the Grey-crowned Babbler may prove to be a separate species. Further investigation is required. 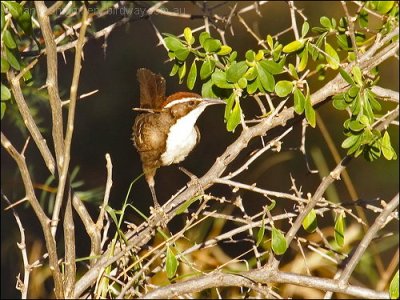 All five species are ground-feeding omnivores and highly social. Babblers live in family groups and small flocks of up to about 20 individuals and forage communally, calling loudly to one another all day long. They feed principally on insects and other invertebrates, but will also take seeds, fruits and small vertebrates. Most food is obtained on the ground, although they will also forage in low bushes; the Grey-crowned Babbler and New Guinea Babbler feed more extensively in vegetation than the other species. The long bill is used to probe and overturn large objects. They will also hold objects with one foot and hammer them with the bill in order to extract food.

Australo-Papuan babblers are monogamous breeders which defend territories. The breeding pair will be aided in breeding by a number of helpers from its group. A number of groups may have more than one breeding pair. Extra male helpers aid the male in his responsibilities whereas the females aid the main breeding male in hers. They have an extended breeding season. Australo-Papuan babblers construct large nests for communal roosting, and these nests may be used for breeding, or new nests may be constructed. There may be a lrage number of nests used by the group in a small area. When the female is breeding she alone uses the breeding nest. Nest construction, both of roosting and breeding nests, is undertaken by all birds in the group. Between one to six eggs are laid (the number and range varies by species) and are usually incubated by the breeding female alone (although a helper female may aid occasionally). The Breeding male and other helper males feed the breeding female during incubation. Incubation lasts between 19-25 days. The female broods the chicks until they are able to thermoregulate, and the chicks fledge after 16-23 days. After leaving the nest the chicks will continue to be fed by the adults for a number of months.”

*Information from Ian’s Bird of the Week newsletter, Wikipedia and other internet sources.

Check out the Bird of the Week – Introduction

See:
Ian’s Bird of the Week for more of these articles.
Ian’s Birdway Website