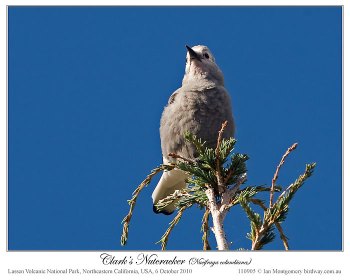 Ian’s Bird of the Week: Clark’s Nutcracker ~ by Ian Montgomery

My apologies for the very late bird of the week. My last week in California was very full, so the flight to Costa Rica last Sunday was the first opportunity to prepare the photos and, owing to internet problems at my first two hotels, I haven’t been able to send this email until now (Thursday) although I wrote it on Monday morning.

This is one of the birds of the week that gets chosen because there’s a good story to go with it. Clark’s Nutcracker is a mountain species, found near the tree-line in coniferous forest or rocky areas, that I’d only seen once before, in Colorado in September 1970 and and last week’s visit to Lassen Volcanic National Park in NE California was my third since 2008 to look for it. The first photo shows the craggy trail recommended by a ranger to Bumpass Hell (I kid you not) my sister, Gillian, and I took to look for it.

Eventually, we returned to the car park empty-handed and went to the rest-rooms shown in the second photo. After I’d emerged, I heard the call we had been listening for, and turned round the find Gillian looking for the source – a Clark’s Nutcracker calling mockingly at us perched the very top of the small pine tree right behind the building, third photo.

After a few seconds, it then flight right over my head and almost into the camera, fourth photo, to perch on a rock beside the car park, directly in front of the sun, thank you very much, fifth photo. I dodges the inevitable questions from a couple of tourists about the size of my 500mm lens to get in a better position before the bird flew, sixth photo, with its mate down into the very steep valley, never to be seen again.

Many birders will be familiar with the car park list, the ones you find waiting for you when you get back after a long and arduous hike and the rest-room list is a variation on this. And familiar with the advice to take your camera everywhere. EVERYWHERE! And with the settings ready to take photos of the unexpected.

My main target here is the elusive Resplendent Quetzal, so a collective world-wide prayer that I can serve it up to you as the next bird of the week would be greatly appreciated!

Lee’s Addition:
I couldn’t help but chuckle about his being ready at all times episode. It reminded me of a verse in Daniel that says,

Now if ye be ready that at what time ye hear the sound of the cornet, flute, harp, sackbut, psaltery, and dulcimer, and all kinds of musick, … (Daniel 3:15 KJV)

I didn’t read where it mentioned the “Clark’s Nutcracker calling mockingly.”

As usual, Ian had another interesting birdwatching experience.

The Clark’s Nutcracker (Nucifraga columbiana) are in the Corvidae – Crows, Jays family of the Passeriformes order.