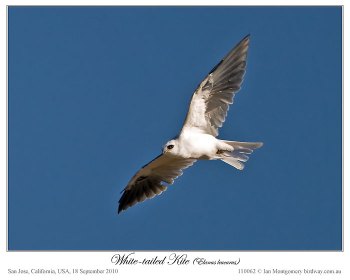 It was only when I was recently preparing this photo for the website, that I noticed that this White-tailed Kite was carrying a small mammal, probably a mouse given the location and the length of the tail, so I thought I would share it with you.

If you are an Australian birder and this bird looked very familiar – ah, a Black-shouldered Kite – you actually be very nearly right. The endemic Australian Black-shouldered (Elanus axillaris), the American White-tailed (E. leucurus) and the Old World Black-winged (E. caeruleus) Kites have been regarded as a single species in the past. Although they are now treated as separate ones, they are referred to collectively as a ‘super-species’, which, if you’re cynical, you might see as a case of taxonomists hedging their bets. The only other member of the genus Elanus worldwide is the Letterwinged Kite (E. scriptus), also an Australian endemic and a rarely seen, largely nocturnal inhabitant of the dry centre.

The three species differ slightly in size – the White-tailed at 15in/38cm in length is by a small margin the largest – but mainly in the pattern of the underwing. If you look carefully at this bird you can see a blackish spot on a white background near the wrist joint (the primary underwing coverts). This is longer in the Australian version and missing completely in the otherwise very similar Eurasian one. The Black-winged occurs quite widely through southeastern and southern Asia, central and southern Africa and, in small numbers in Iberia and north Africa. The White-tailed occurs in the southern USA and Central and South America.

These are elegant little kites, hover like kestrels and all feed mainly on small mammals. The Letter-winged is particularly partial to the long-haired rat, despite its scientific name Rattus villosissimus, and its population cycles follow the rat’s with the birds dispersing widely when the rat population crashes. I once saw a pair at dusk in a street in inner Sydney (Surry Hills) and you can’t get much farther from the dry interior than that.
Anyway, I’m getting off the track. Back at the website, I’ve added new photos of Australian, American White and Brown Pelicans and starting adding some snakes to the Other Wildlife section.
Links:
White-tailed Kite
Black-winged Kite
Black-shouldered Kite
Pelicans
Snakes
Best wishes,
Ian
—
Ian Montgomery, Birdway Pty Ltd,
454 Forestry Road, Bluewater, Qld 4818
Phone: +61-7 4751 3115
Preferred Email: ian@birdway.com.au
Website: http://birdway.com.au

Lee’s Addition:
Another neat bird from Ian. Glad to see him post because I wasn’t sure if he was being affected by the flooding in Australia.

But these are they of which ye shall not eat: the eagle, and the ossifrage, and the ospray, And the glede, and the kite, and the vulture after his kind, (Deuteronomy 14:12-13 KJV)