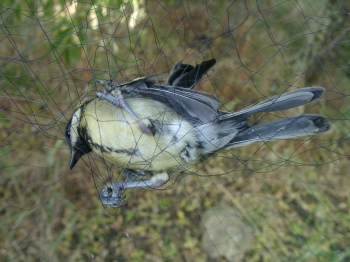 Bird Caught in a Net ©WikiC

“foul´ẽr (יקשׁ, yōḳēsh): A professional birdcatcher. In the days previous to firearms, birds were captured with nets spread on the ground, in traps and snares. There was a method of taking young birds from a nest, raising them by hand, and when they had become very tame, they were confined in hidden cages so that their voices would call others of their kind to the spot and they could be killed by arrows of concealed bowmen or the use of the throw-stick (Ecclesiasticus 11:30) This was a stick 1 1/2 feet in length and 1/2 inches in diameter, hurled with a rotary motion at the legs of the birds and was very effective when thrown into flocks of ground birds, such as partridge or quail, especially if the birds were running up hill. There was also a practice of sewing a captured bird’s eyelids together and confining it so that its cries would call large numbers of birds through curiosity and they could then be taken in the several ways mentioned. The fowlers supplied the demand for doves and other birds used for caged pets, and furnished the market with wild pigeons and doves for sacrifice and such small birds as were used for food.

For he will deliver thee from the snare of the fowler. And from the deadly pestilence. (Psalms:91:3)

This is David’s promise that the Almighty will deliver us from the evil plans laid to ruin us, as a bird sometimes in its struggles slips the hair and escapes from the “snare” (which see) set for it.

(Here is a video of a modern day “fowler” by patriotledger.)

Our soul is escaped as a bird out of the snare of the fowlers: The snare is broken, and we are escaped. (Psalms 124:7)

Here is the fulfillment of the former promise in a cry of rejoicing. Sometimes the snare held fast, sometimes it broke; then the joy in the heart of a freed man was like the wild exultation in the heart of the escaping bird.

Deliver thyself as a roe from the hands. of the hunter. And as a bird from the hand of the fowler. (Proverbs 6:5)

Flamingos Caught in a net©Flickr

With methods so primitive as these for taking birds, it must have occurred frequently that a stunned, wounded or entrapped bird slipped even from the hand that held it and made good its escape.

For among my people are found wicked men: they watch, as fowlers lie in wait; they set a trap, they catch men. (Jeremiah 5:26)

Here is the plain comparison strongly drawn between wicked men entrapping their fellows and fowlers taking unsuspecting birds.
The last reference is in Hosea 9:8:

Ephraim was a watchman with my God: as for the prophet, a fowler’s snare is in all his ways, and enmity in the house of his God.

Wherever he goes, the prophet is in danger of being trapped.”

This article was quoted from:

The International Standard Bible Encyclopedia (1915) is a public domain Biblical encyclopedia. This encyclopedia was published by Wm. B. Eerdmans Publishing Co. It contains articles by nearly 200 scholars about archaeological discoveries, the language and literature of Bible lands, customs, family life, occupations, and the historical and religious environments of Bible people.

In addition there is a newer version which should not be confused with the public domain 1915 edition that can be found freely available at various sites.

Photos and Video added and article layout by Lee