The Red-eyed Vireo – The Persistent Singer… ~ by a j mithra

The Red-eyed Vireo, Vireo olivaceus, is a small American songbird, 13–14 cm (5.1-5.5 in) in length. It is somewhat warbler-like but not closely related to the New World warblers (Parulidae).

The Red-eyed Vireo is a Neotropical migrant that makes its way from its home in Central and South America to the deciduous woodlands of North America to select a territory, win a mate and raise its young.

Throughout the eastern United States, Red-eyed Vireos are common in deciduous woodlands. However in Washington they are largely confined to stream and lakeside woodlands and cottonwood stands.

God has created us in His own image, its good, but, how much effort do we take to win a mate and raise a family?

Isaac was meditating when his father’s servant Eliezer was returning with a bride for Isaac as per Abraham’s instructions….

Now Isaac had come from Beer Lahai Roi, for he was living in the Negev.
He went out to the field one evening to meditate,and as he looked up, he saw camels approaching.
Rebekah also looked up and saw Isaac. She got down from her camel and asked the servant, “Who is that man in the field coming to meet us?”
“He is my master,” the servant answered. So she took her veil and covered herself.
Then the servant told Isaac all he had done. Isaac brought her into the tent of his mother Sarah, and he married Rebekah. So she became his wife, and he loved her; and Isaac was comforted after his mother’s death. (Genesis 24:62-66)

How many men meditate on the word of God before they get married?

God holds marriage in high esteem that is the reason He calls Himself as the bridegroom and the church as His bride..

So the LORD God caused the man to fall into a deep sleep; and while he was sleeping, he took one of the man’s ribs[a] and then closed up the place with flesh.
Then the LORD God made a woman from the rib he had taken out of the man, and he brought her to the man.
The man said, “This is now bone of my bones and flesh of my flesh; she shall be called ‘woman,’ for she was taken out of man.”
That is why a man leaves his father and mother and is united to his wife, and they become one flesh. (Genesis 2:21-24)

Red-eyed vireo is difficult to see because it forages high in the canopy, picking food from the undersides of foliage, hopping or hovering in the leaves. It is an arboreal bird of the canopy, where it is very active although rather heavy in its movements, maintaining a horizontal posture.

This species migrates over long distances, and mostly at night. Red-eyed Vireo is relatively heavy when moving over short distances, but it can be very active too. Its flight is altogether performed in a gliding manner, and when it is engaged in pursuit of a rival or an enemy, it passes through the woods with remarkable swiftness. The small territory of this species consists of a cylinder extending from the forest canopy to the low understory.

Red-eyed Vireos can also be difficult to see because they forage high in the canopy, where they pick food from the undersides of foliage, hopping about or hovering in the leaves.

During courtship and nesting seasons, their prominent, repeated calls readily reveal their presence.

The purpose of God creating us is not fulfilled unless we worship Him. After all, God created us to put us in satan’s place to worship Him and Him alone..

And he answered and said unto them, I tell you that, if these should hold their peace, the stones would immediately cry out. (Luke 19:40)

These birds are important to maintaining the health of our forests. They consume large quantities of insects and caterpillars harmful to tree foliage. It is an effective predator on gypsy moths, fall webworms, tree hoppers, scale insects and others.

Job prayed for his friends amidst disaster and God blessed him double fold….

And the LORD turned the captivity of Job, when he prayed for his friends: also the LORD gave Job twice as much as he had before. (Job 42:10)

Red-eyed Vireos glean insects from tree foliage, favoring caterpillars and aphids and sometimes hovering while foraging. In some tropical regions, they are commonly seen to attend mixed-species feeding flocks, moving through the forest higher up in the trees than the bulk of such flocks.

They also eat berries, especially before migration, and in the winter quarters, where trees bearing popular fruit like Tamanqueiro (Alchornea glandulosa) or Gumbo-limbo (Bursera simaruba) will even attract them to parks and gardens. Fruit are typically not picked up from a hover, but the birds often quite acrobatically reach for them, even hanging upside down.

Although animal food makes up 85 percent of its summer diet, the Red-eyed Vireo may be completely frugivorous (fruit-eating) during the winter and late summer. In summer, Red-eyed Vireos feed mostly on adult insects and larvae, especially caterpillars.

During the courtship, male performs displays, flicking on its legs, with fluffy feathers and fan-shaped tail. 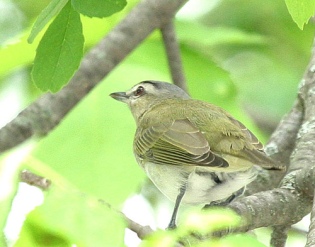 During incubation, the male sings faster, 50/60 phrases a minute. When it stops, female comes off the nest and it feeds her, or they feed together. They are monogamous. Which means, the female birds is willing to even starve and will not leave its nest until the male bird stops singing..

Red-eyed Vireo is highly territorial on breeding areas, and it’s very noisy. When it’s wintering in South America, it does not sing.

The breeding habitat is open wooded, deciduous and mixed deciduous forest areas across Canada and the eastern and northwestern United States.

These birds migrate to South America, where they spend the winter. The Latin American population occur in virtually any wooded habitat in their range. Most of these are residents, but the populations breeding in the far southern part of this species’ range (e.g. most of its range in Argentina, Uruguay, Paraguay and Bolivia) migrate north as far as Central America.

This vireo is one of the more frequent American passerine vagrants to western Europe, with more than one hundred records, mainly in Ireland and Great Britain.

In northern Ohio, it seems to return to breed at about the same time as one century ago; intriguingly, it might actually leave for winter quarters one or two weeks earlier at present than it did in the past..

Nest is built 1, 5 to 20 metres above the ground. Female builds the nest in five days, without assistance from the male. Nest is made of vine-bark strips, grass, needles and twigs. The outer parts are firmly attached to the twigs, the fibres being warped around them in various directions. The lining is beautifully disposed. It consists of fibrous roots, grasses, and sometimes the hair of grey squirrel and raccoon. It is covered on the outside with wasp’s nest paper, and spider webbing. It is a typical vireo nest, suspended by its rim from a horizontally forked twig, or the corner of a tree trunk, and two radiating branches.

Female lays 3 to 4 eggs. Incubation lasts about 11 to 14 days only by female. Both parents feed the young during 10 to 12 days when they are in the nest. Female and perhaps male, continue to feed them for up to two weeks after they leave the nest.

Most likely call to be heard is a nasal, querulous “tshay” or “chway”, although migrants are usually silent.

Calls include a nasal whining “quee”.

Video of a Red-eyed Vireo singing by Robert Schaefer

During courtship and nesting seasons, their repeated calls reveal their presence.

Their persistent song is legendary. It is repeated as often as 40 times a minute, all through the day..

Red-eyed Vireos were once considered one of the three most abundant birds of the forests of Eastern North America.

Their persistent song is legendary. A single individual was once heard to sing 22,197 songs during a single day (Lawrence 1953).

If these 13 to 14 cm long birds can sing up to 22,197 songs in about ten hours which comes to roughly about 2200 songs per hour which in turn comes to about 37 songs per minute, how much we should sing?

This verse was written for God’s own people, but, sadly this bird has taken the cue and we have chosen to shut our mouth rather than to shout to the King…

Come let us sing to win favour from THE KING…

a j mithra please visit us at:

Lee’s Addition:
Thanks, aj. I enjoyed putting the photos and sound in this one. They are in this area, but I have not seen one yet.

Also, when a j sent in his draft, he included a note to me that I thought was worth placing here. He has been adding great articles for a year now, so this is sort of a “mile-stone article” for him. From the e-mail:

“Hello Sister.Lee,
Its been a great learning experience and a great honor to serve the Lord  though your website.. I am thrilled when I turned back and looked at how God has been so full of mercy and an inspiration which He gives us often through Birds.. Its been a year since you published my first article on 4th March 2010.. I just want to say a BIG THANK YOU for letting me be a part of this great site..
Thank you once again..
Regards and prayers to you and yours,
aj mithra”

The Red-eyed Vireo is in the Vireonidae, Vireos and Greenlets Family and is a Passerine or perching bird. There are 63 members in the family.

One thought on “The Red-eyed Vireo – The Persistent Singer…”