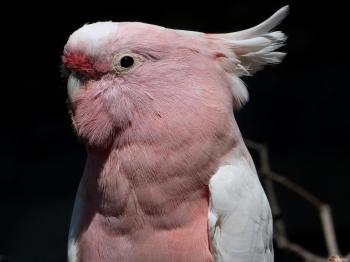 I know and am acquainted with all the birds of the mountains, and the wild animals of the field are Mine and are with Me, in My mind. (Psalms 50:11 AMP)

Here are more members of the Psittaciformes Order of Parrots and Cockatoos we saw during our trip to the Cincinnati Zoo in Ohio.

They were in various areas of the Zoo. The Major Mitchell’s Cockatoo was outside enjoying himself or herself, whichever it was. The perch was in a nicely landscaped area near the entrance/exit, depending on which way you went through the zoo. For us, it was the last member of its family we saw.

These beautiful birds are from Australia and are on the decline. They look very similar to the Galah we photographed at the Brevard Zoo, but have a lighter pink color. Both are members of the Cacatuidae – Cockatoos Family and are closely related, even nesting in the same area. There has been on occasion where the two species have interbred and produced hybridised offspring.

Their biggest difference is the crest that the Major Mitchell likes to pop up. Our bird didn’t show off, but Ian’s photo shows the crest raised.

In the Lorikeet Landing area, we encountered the Black-capped Lory (Lorius lory) who also lives near Australia in New Guinea. “It is a colorful and relatively robust lory (31 cm). There are seven subspecies, all with green wings, red heads and body around the wing, a black cap, grey-black cere, yellow underwings, and blue legs and belly. Most also have a blue nape and mantle (area between wings on the back). It remains overall widespread and common 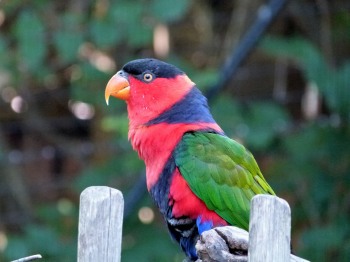 The Black-capped Lory inhabits the primary forest and forest edges in most lowland areas up to 1000m (sporadically to 1750m), but not monsoon forest or coconut plantations. It is usually found in pairs and occasionally in groups of 10 or more. Their diet includes pollen, nectar, flowers, fruit and insects. 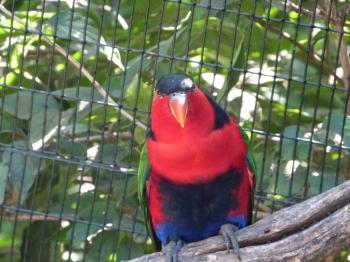 (Information for Wikipedia and other Internet sources)

** PS – This is a little short, but I had surgery on my neck yesterday. (Removed a cancer cell.)