Here is the belated and sought-after bird of the week after a great trip to Victoria. I’ve been unwell since my return a week ago, but things are fine now and the wheels of my life are turning again.

Your spiritual support and goodwill have done it again, so it’s another mission accomplished, though in English this time (having been Catalan and Spanish in the past). Actually, most credit should go to my sharp-eared, sharp-eyed, knowledgeable and passionate birding friends. With their hard work, the track record for target species in East Gippsland during our stay was fantastic. We went searching for owls on each of the three nights. The first night, we heard both Greater Sooty and Masked Owls – and the sharpest-eyed of the group saw a Masked Owl in flight. On the second night, at a different site we heard another Sooty Owl and eventually caught sight of it flying among the tall trees of the forest. It then flew over us and perched on a dead limb in the open high above us.

I got only this photo, discarding a second out of focus one. For the technically minded, I used manual focussing – it was too distant and the light and contrast too faint for auto focus – and guessed an exposure of 1/80sec at f5.6 and 1600 ISO using the 100-400mm zoom. As the passionate/obsessive birder would understand, it was worth travelling to Victoria for this one photo and, having taken it, misión completa (I have liked it in Spanish since finding the Resplendent Quetzel in Costa Rica in 2010) I was free to relax and enjoy whatever other gems came our way. In fact, one such, this Yellow-bellied Glider. sailed over our heads and landed in a nearby tree while we were trying to locate the calling Sooty Owl.

These are fantastic, long-tailed, wrist-winged relatives of possums (the Striped Possum of Northeastern Queensland is in the same family, the Petauridae) and the Yellow-bellied can glide up to 150m/400ft. It is rabbit-sized with a huge bushy tail that it presumably uses as a rudder in flight. They’re called wrist-winged, to distinguish them from elbow-winged like the Great Glider, and if you look carefully in the photo you can see the black edge of the membrane attaching to the little finger of the left hand. This proved to be diagnostic as we were unsure of both its identify and of whether the large possum-like animal on the tree was the same creature as the pale form that glided over us.

They are reasonably common in suitable old growth forest in eastern Australia, though the northern race regina has a very restricted range in northeastern Queensland and is threatened by logging. Quite coincidentally, I received a request yesterday to support a petition to prevent the transferring of Tumoulin Forest Reserve near Ravenshoe to State Forest so that logging can resume. The petition is aimed directly at protecting the Yellow-bellied Glider, and if you think, like I do, that downgrading the status of nature reserves is disgraceful, then we should support it: http://www.thepetitionsite.com/851/727/614/protect-rare-possum-habitat-from-senseless-logging/.

Later that evening, we returned to the Masked Owl site. We could hear one or two Masked Owls but they were wary, keeping their distance in the forest and moving away when spotlights were shone in their direction. We did, however, see one in flight and, having already photographed the Sooty Owl, I was satisfied with that, even though we did try again for photographs without success on the third night. We did, however, find this Sugar Glider, a small relative of the Yellow-bellied. It seemed to be keeping a low profile, very sensible given the presence of calling owls. Later still, we came across a juvenile Southern Boobook which flew up in front of us into a small tree beside the road. It didn’t dally for a photo, but that made it a three-owl evening which we all thought was special.

I’ve barely mentioned Sooty Owls, as so much else happened that evening. There are two Australian forms: the Lesser Sooty in the wet tropics of northeastern Queensland and the Greater Sooty in eastern Australia from Eungella National Park near Mackay in Queensland to the Dandenong and Strzelecki Ranges in Victoria, both reasonably common in suitable habitat of wet, gully, forest but rarely seen. Another race, supposedly of the Greater Sooty, occurs throughout New Guinea. Currently the Lesser and Greater are treated as separate species by most authorities, though Christidis and Boles lumped them in 2008. Having one species with a disjoint range in New Guinea and eastern Australia and a closely-related separate one in between should make any student of biogeography laugh out loud, but that’s the way it is. Sooty Owls feed mainly on arboreal mammals, though they will take other prey such as birds. 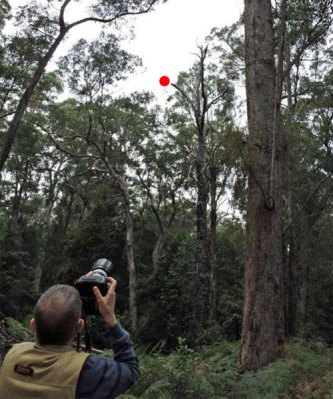 On the following day we returned to the Sooty Owl site and here is a photograph of me photographing it, the red spot showing where the bird in the photo was perched. I was surprised at how far up it was and felt very fortunate to have got the one reasonable photo. This forest also produced for us Tawny Frogmouth, Australian Owlet-Nightjar, Brush-tailed Possums, a bandicoot, a wombat and Black or Swamp Wallabies leaving us in no doubt about the value of old growth forests (reminder http://www.thepetitionsite.com/851/727/614/protect-rare-possum-habitat-from-senseless-logging/).

A few people have requested location information about the owls, but I have been sworn to secrecy by my friends as they don’t want them being disturbed too much or subjected to tapes of owl calls. So please understand my reticence.

the little owl, the fisher owl, and the screech owl; (Leviticus 11:17 NKJV)

What an adventure. Some birds just don’t want to be found. Thanks again, Ian, for sharing another trip with us. Glad you are feeling better.

Sooty Owls belong to the Tytonidae – Barn OIwls family which has 19 species. Ian’s Owls can be found at