Ian’s Bird of the Week ~ Pilotbird ~ by Ian Montgomery

The primary targets in East Gippsland were the Sooty and Masked Owls, but there were several daytime birds on the wanted list too. One of these was the Pilotbird, a smallish – 17cm/7in long – brown, ground-dwelling bird of the mountain ranges and dense coastal scrub of southeastern Australia from just south of Sydney almost to Melbourne. I’d seen one only once before, near Mittagong in New South Wales 16 years ago, but that encounter was only a glimpse and no photography was involved.

It’s an unobtrusive bird and easy to overlook, unless you know its flutey, far-carrying call, sometimes rendered as ‘guinea-a-week’. My Victorian friends knew a good spot for it in coastal scrub and we found one there with relative ease, returning the following day (first photo) to get better photos. It rummages around in thick undergrowth looking for invertebrates. The second photo has a red dot showing the exactly location, beyond the sinuous brown branch, so you can appreciate that we are lucky to be able to see anything much of it in the photo. It has unusual buff dark-edged feathers on the breast, giving it a scaly appearance. The plumage is apparently dense and silky as reflected in its scientific name: Pycnoptilus means thick-feathered, and floccosus is derived from the Latin floccus and means ‘full of flocks of wool’, which, I must admit, left me not much the wiser.

It’s common name Pilotbird arises from the bird frequently associating with Superb Lyrebirds, taking advantage of the digging habits of the latter (third photo) to snatch up revealed invertebrates. Some sources say the name Pilotbird comes from the similar habit of Pilotfish which associates with large marine predators such as sharks; other say that the Pilotbird by its call led early settlers looking for food to lyrebirds. I prefer the first explanation. Lyrebirds are very vocal in their own right and don’t need another species to advertise their presence. Lyrebirds are perhaps the world best mimics and are known to mimic Pilotbirds, and it would be easy to imagine that this attracted Pilotbirds in the first place and they then learned that this was an easy way to get dinner. We did in fact see several Superb Lyrebirds dashing across the roads of the forests where the owls lived, though the coastal scrub didn’t strike me as good lyrebird habitat. 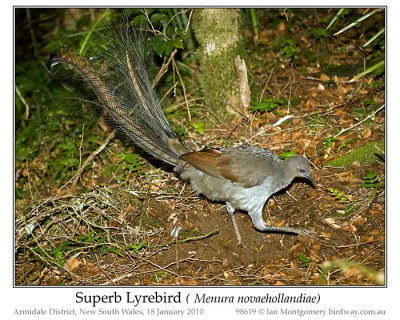 This photo of the lyrebird digging vigorously reminded me both of Scrub-turkeys and Chowchillas (fourth photo) and I wondered whether the Pilotbird had a behavioural counterpart in the forests of Northeastern Queensland. The Pilotbird is usually placed in the Acanthizidae, the family of thornbills and their allies (though it shows some affinities with the bristlebirds Dasyornithidae), so I checked up on the Fernwren (fifth photo) another brown, rummaging Acanthizid endemic to the Wet Tropics.

Sure enough, HBW (Handbook of Birds of the World) reports that the Fernwren “sometimes associates with Orange-footed Scrubfowl (Megapodius reinwardt) and Chowchilla (Orthonyx spaldingii), following in close proximity and catching prey disturbed by their feeding actions”. The Orange-footed Scrubfowl is, of course, a cousin of the Brush-turkey.

So maybe this week’s bird of the week should be entitled ‘small brown rummaging birds of the forest floors of eastern Australia’.

For you are my rock and my fortress; and for your name’s sake you lead me and guide me; (Psalms 31:3 ESV)

Teach me to do Your will; for You are my God; Your Spirit is good; lead me into the land of uprightness. (Psalms 143:10 MKJV)

What great protection colorations these birds have received from their Creator. I am sure when the birds of prey are in the area, rummaging types of birds are very thankful for their less colorful outfits.

4 thoughts on “Ian’s Bird of the Week ~ Pilotbird”