WHY BIRDWATCHING IS WORTHWHILE

3 Lessons from a Box Turtle: Independence, Patience, and Frugality 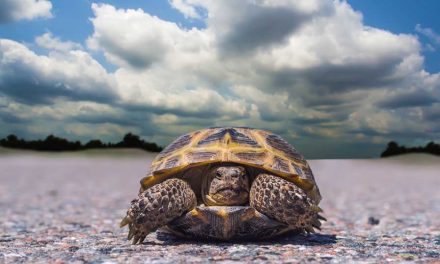 Peter was quick to check on what others would or should be doing, but the Lord reminded Peter that personal accountability is more important. Yes, our lives are interdependent – however, practicing independence (especially as it applies to individual accountability) is an important life skill.  And that is also true of how box turtles live their humble lives, providing an object lesson to birdwatchers. Plus, turtles provide 2 more lessons for birdwatchers, as we shall see.

Recently I was reading an ecology perspective (a few excerpts of which are quoted hereinbelow) about the life of a Box Turtle  –  and it reminded me of 3 reasons why I enjoy birdwatching. [By the way, for a short video on Eastern Box Turtles, see https://www.youtube.com/watch?v=-blYc9GkyFs  .]

Specifically, birding is a worthy investment for economic reasons – and because it encourages recreational independence, and patient resilience. More on those three reasons below.  (Of course, there are other worthy reasons for birdwatching  –  perhaps I will address them some other time.) 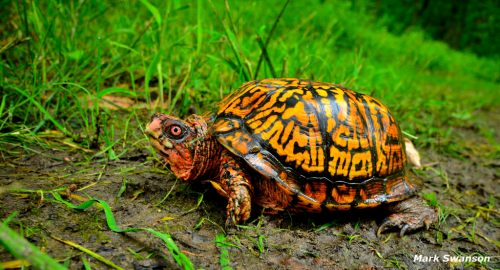 Imagine driving down a country road, where a turtle is slowly crossing – you try to avoid squashing the poor reptile, by swerving to miss it. Being a slow pedestrian, in traffic contexts, is a distinct disadvantage.  However, the turtle’s slowness is more of an advantage, most of the time, because its independent lifestyle is never in a rush to “keep up with the Joneses”.

Instead of allowing the image of a lethargic, indifferent creature to mislead you [as you consider the lifestyle of a rural turtle], envision these pedestrians as animals enviably insulated form [most of ] the vagaries of their setting. In fact, land tortoises seem more divorced form environmental stresses than any other Appalachian vertebrate.

The turtle’s habitat provides our first hint of its independence.  Box turtles live in a variety of terrestrial situations—though permanent water does not seem to be a requirement.  High densities of these reptiles commonly occur in woodlots with large trees, canopy gaps, and a diversified ground cover.  The turtles bask in openings in the canopy and munch on a variety of short plants.  The close ground cover of woody shrubs and leaf litter provide shelter.  To feed and bask, box turtles also frequently enter open areas adjacent to the woods.  . . . . 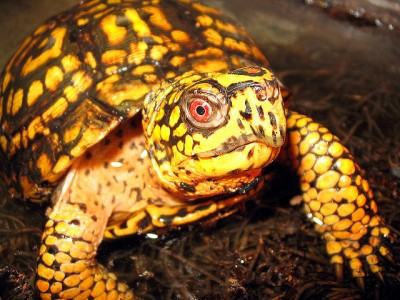 Another one of the box turtle’s built-in advantages is its patient resilience – it can survive a “tough neighborhood”, climatologically speaking.   (Patience, of course, is a benefit for any birder.)

One environmental condition [that] turtles do respond to is a cold snap in autumn. Box turtles enter hibernation with the first killing frost.  A wet fall [i.e., a rainy autumn] without a sudden freeze provides good conditions for entering hibernation.  Dry weather, which makes digging difficult, and a sudden freeze may trap some individuals above ground.  Surprisingly, box turtles do not hibernate below the frost line, but remain dormant at depths of up to five inches below the leaf litter.  . . . .

Members of the genus Terrapene, which includes the eastern box turtle, hibernate in shallow terrestrial burrows that feature a vertical extension to the surface.  In cold spells, turtles turn their heads farthest from the opening.  In Ohio, the average turtle spends 142 days in a burrow under three inches of leaf litter with its plastron [i.e., the ventral (“belly”) surface of the turtle’s shell] recessed two inches into the soil.  In such shallow retreats, box turtles are exposed to freezing temperatures, yet they usually survive.  Able to supercool to only -1.1 C [i.e., just below freezing] this strategy cannot be its entire secret [of winter weather survival]. . . .

In an astounding adaptation [i.e., an amazing design-feature that fits the turtle for filling that habitat], the box turtle is able to survive the freezing of 58 percent of its body water for seventy-three hours, making the box turtle the largest animal known to exhibit freeze-tolerance. . . . .

[Quoting  George Constanz, HOLLOWS, PEEPERS, & HIGHLANDERS:  AN APPALCAHIAN MOUNTAIN ECOLOGY, 2nd ed. (W. Va. Univ. Press, 2004), pages 128-129.]  In other words, turtles wait during “tough times” – and their patience is routinely rewarded.  (Likewise, birdwatchers who are patient and still are more likely to enjoy seeing the birds, especially if binoculars are handy – as opposed to scaring the birds off (by movements that startle them) due to spectator impatience. 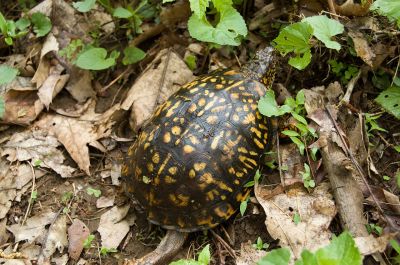 A third advantageous trait of the box turtle is its metabolic frugality – turtles are slow to spend their energy, so that means they don’t need to eat a lot to replenish spent energy!

A box turtle’s daily behavior seems to be divorced form the caprice of its immediate environment. The condition of a turtle at any particular time appears more an integration of its past experiences than a reflection of its present stresses [due to three of the turtle’s  anatomical/physiological design-features].  . . . .

Most obviously, a box turtle’s shell takes the edge off environmental extremes by buffering its body from environmental stresses such as heat and drought. During severe drought, the tortoises do not concentrate around creeks—they merely seek moist sites within their home ranges, make a form [i.e., a depressions in surface vegetation, descending into only about one inch of topsoil] under a pile of leaves, and rest peacefully.  Second, their forms and hinged plastrons protect and conceal them from what few predators they do have, such as raccoons.  And third, box turtles have a low metabolism. Coupling that with omnivorous food habits, they enjoy a high supply—low demand economy and do not need to hustle.  They eat insects, earthworms, strawberries, [other] fruits, mushrooms, and many other foods, yet they burn these calories slowly.  In these ways, box turtles enjoy a tremendous hedge against environmental stresses.

In other words, the box turtle is frugal about metabolically “spending” its food energy – if it doesn’t spend a lot it doesn’t need a lot to live on. As the old saying goes, which surely applies to animal metabolism:  “if your output exceeds your input, your upkeep is your downfall”.

So how does this apply to birdwatching?

First, just as turtles are relatively independent, birdwatching is a pastime for those who are independent – there is no need for popular approval for birdwatching. Birdwatching can be done as a group, yet it also can be done individually.  Is birding “popular”?  Forget about “peer pressure” or “fashionableness” – birdwatching is worthwhile whether it is “in season” or “out of season”.  Independent-minded people are often birdwatchers, because birding is a wonderful avocation regardless of whether others do or do not appreciate it.

Third, just as turtles are economical in their metabolic “spending” habits, birdwatching is a pastime that is perfect for people of modest means, as well as for people of surplus means who are frugal with their resources. Many “hobbies” are expensive – but not birdwatching!

Although it is certainly possible to spend a lot of money (as a birdwatching), such as by taking a birding vacation to Costa Rica, a lot of birdwatching opportunities can be enjoyed with just a bird-book, binoculars, notepad, and pen.  Having an inexpensive “hobby” provides a very real economic freedom – so one need not worry about the cost of birdwatching!  Furthermore, many educational resources, about birds, are available (free of charge) on the Internet, including the God-honoring blogsite LEESBIRD.COM !

So, enjoy your birdwatching opportunities – it’s good for practicing independence (instead of trying to “keep up with the Joneses”), it develops your patience, and it’s economically responsible!

4 thoughts on “WHY BIRDWATCHING IS WORTHWHILE — 3 Lessons from a Box Turtle: Independence, Patience, and Frugality”