41 Let Thy mercies come also unto me, O Lord, even Thy salvation, according to Thy word.  42 So shall I have wherewith to answer him that reproacheth me: for I trust in Thy word.  43 And take not the word of truth utterly out of my mouth; for I have hoped in Thy judgments.  44 So shall I keep Thy law continually for ever and ever.  45 And I will walk at liberty: for I seek Thy precepts.  46 I will speak of Thy testimonies also before kings, and will not be ashamed.  47 And I will delight myself in Thy commandments, which I have loved.  48 My hands also will I lift up unto Thy commandments, which I have loved; and I will meditate in Thy statutes.  (Psalm 119:41-48 KJV)

“F” is for Flamingo, Frigatebird, Frogmouth, Fairywren, Flowerpecker, Flufftail, Fantail, Figbird, Fulvetta, and/or Finch — plus whatever other birds there are, that have names that begin with the letter F.

THE HEBREW ALPHABET HELPS TO TEACH US ABOUT GOD’S TRUTH

Using alphabet letters, to order a sequence of information, has Biblical precedent, as is demonstrated in the five earlier articles in this series of “alphabet birds”:

The perfect example is the “acrostic” pattern of Psalm 119, the longest psalm (having 176 verses!), which psalm has 22 sections (comprised of 8 verses per section), representing the 22 letters of the Hebrew alphabet. (Compare that to the English alphabet, which has 26 alphabet letters, and/or to the Norwegian alphabet, which has 29 alphabet letters.) The sentences in each section start with the same Hebrew letter: Verses 1-8 start with ALEPH, Verses 9-16 with BETH, Verse 17-24 with GIMEL, and so forth.  The such alphabetic-acrostic grouping of verses is Psalm 119:41-48, each of which verses begin with the Hebrew letter  VAV [also written as WAW],  —  which is translated (in English) as a “V” or “W” if used as a consonant, or translated as long “O” or long “U” if used as a vowel.

In this serial study’s lesson, the sixth octet of verses in Psalm 119 (i.e., Psalm 119:33-40), each sentence starts with VAV (also written as WAW, and pronounced “vahv”, like the English word “valve” without the L sound), serving variously as the Hebrew consonant equivalent to the English letters “V”, “W”, “O”, and “U”.  (More on that below.)

And he made thereunto 4 pillars of acacia wood, and overlaid them with gold; their hooks were of gold; and he cast for them 4 sockets of silver.  [Quoting Exodus 36:36.]

So, because VAV is the sixth letter in the Hebrew alphabet, each verse (in Psalm 119:41-48) literally starts with that letter as the first letter in the first word (although the first Hebrew word may be differently placed in the English translation’s sentence):

41 And shall come [vîbō’ūnî], unto me, Thy mercy, O Lord, even Thy salvation, according to Thy word.

42 And I will answer [ve’e‘eneh] him who reproaches me, a word, because I trust in Thy word.

43 And don’t-let-escape [ve’al—tatsêl], from my mouth, the word of truth, very much; because I have hoped in Thy judgments.

44 And I will safeguard [ve’eshmerâh] Thy law, completely, forever and ever.

45 And I will walk [ve’ethallekâh] in largeness [i.e., with great liberty], because Thy precepts I have sought.

46 And I will speak [va’adabberâh] of Thy testimonies, before kings, and I will not be shamed.

47 And I thoroughly-delight-myself [ve’eshta‘sha‘] in Thy commandments, which I have loved.

48 And I raise [ve’essâ’] my hands up, unto Thy commandments, which I have loved; and I will meditate within Thy statutes.

The thematic idea of Psalm 119:41-48, that “joins” these 8 verses together (pardon the pun), is that the psalmist connects all of the important aspects of life – salvation, resisting enemies, being a good steward of God’s Word, walking, talking, facing rulers, and heart priorities – by joining God’s Word to those life activities.  (And so should we!) 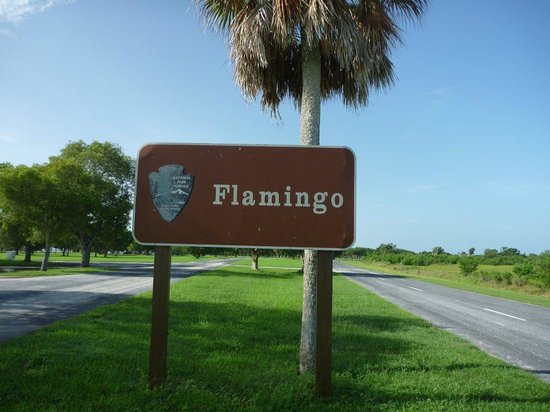 After that lesson (from Psalm 119:41-48), let us rejoin (pardon another pun) our study of “F” birds, beginning with FLAMINGOS, a long-legged wading shorebird well-known to Floridians.

An extremely slim rose-pink [but sometimes flamboyantly bright orange-red or pink-salmon] wading bird as tall as a Great Blue Heron but much more slender.  Note the sharply bent bill or broken ‘Roman nose’.  Feeds [e.g., shrimp and other small tidewater crustaceans] with the bill or head immersed [in shallow water].  In flight it shows much black in the wings; its extremely long neck is extended droopily in front and the long legs trail behind, giving the impression that the bird might as easily fly backward as forward.  Pale washed-out birds may be escapes [i.e., escapees] from zoos as the color often fades under captive conditions [unless a carotene-rich diet is supplied and digested, e.g., carotene-pigmented pellet containing carrots, red peppers, and/or dried shrimp].  Immatures are also much paler than normal adults.

Great Frigatebird (Fregata minor).  The Great Frigatebird is found soaring above tropical oceans all over the world.  Because it is almost always seen at sea, it is not surprising that English sailors (centuries ago) called it the “man-of-war”, a term that indicated a fast-sailing oceanic warship, the same kind of ship that the French called a “frigate” (la frégate). If you ever watch a frigatebird in the air, contextualized by a background (or foreground) that provides distance indexing – as I once did (a Magnificent Frigatebird “cousin”, actually, near the shoreline of Grand Cayman, one of the Cayman Islands), – you too will be impressed with the frigatebird’s speedy flight maneuvers.  In fact, its habit of stealing food (such as fish) from other seabirds is so well-known that the bird might have been better labeled the “pirate-bird”.   Why?  Frigatebirds often harass seagulls carrying fish, in the air, repeatedly, until the seagull drops – abandons – his or her piscatorial food-catch, in order to escape the threatening frigatebird.  As the bullied victim (seagull) flees the scene of the crime, empty-beaked, the buccaneering frigatebird swoops down after the plummeting food, snatching it out of the air before it drops into the water. The physical appearance of a frigatebird is not to be easily forgotten.  Frigatebirds are mostly black, with long angular wings, with a long sharply forked tail that looks pointed when “closed”.  (Males are almost all black, except for the red gular pouch (described below); the females have a white “bib” covering most of the neck-to-chest area (but have no gular pouch).  Frigatebirds “have long, thin, hooked bills and the males [each] possess an inflatable gular pouch which can be blown up to form a huge scarlet ball during courtship”.  [Quoting Marc Dando, Michael Burchett, & Geoffrey Waller, SeaLife, a Complete Guide to the Marine Environment (Smithsonian Institute Press, 1996), page 248.]  The male’s bright red “gular pouch” is a skin-covered (i.e., featherless) inflatable throat sac that connects the lower half of the bird’s beak down to and below the bird’s neck.  This inflatable throat sac, quite conspicuous during breeding season, is showcased during courtship displays, swelling into a balloon-like inflation (like a bullfrog), for a timeframe that may exceed 15 minutes!  The noise produced by this throat sac “sound-box” is the frigatebird’s rattling equivalent to yodeling.

The Great Frigatebird is usually seen soaring above ocean waters, or swooping through the air near island beaches, looking (“on the fly”) for a meal.  In fact, frigatebirds are rarely seen on land during daylight, though they must use land for sleeping and for nesting activities, such as laying and hatching their eggs.  [See www.icr.org/article/why-we-want-go-home/ — citing Tony Soper, Oceans of Birds (London:  David & Charles Press, 1989), pages 82-83.] Oceanographer Tony Soper describes the winged magnificence of this oceanic flier:  “Frigatebirds live up to their reputation [i.e., “frigate” = seafaring warship] with spectacular manoeuvres in aerial pursuit and piracy, stalling and turning with total control in a way which outclasses any competition.  Supremely aerial seabirds, they can hang seemingly motionless in the sky for hours [gliding], waiting to pounce.  The air is their daytime medium, they alight on the water only at their peril, for they have small oil glands and their plumage is not waterproof. … They are equally at a disadvantage on dry land, for their legs are short and hopelessly inadequate for walking.  They must shuffle and climb to a point from which they can take off [and “land” on a rising thermal air current, as if it was an elevator].  By night they roost on a tree or bush which offers a convenient launch-pad when the sunrise brings a thermal lift.  They have huge wings, up to 7ft. (2.1m) in span….  With their shapely wings they float effortlessly in dynamic soaring flight, plunging only to retrieve food items from the surface or to snatch a flying fish.  Sometimes they chase other seabirds to relieve [i.e., rob] them of their catch. “   [Quoting Tony Soper, Oceans of Birds (London:  David & Charles Press, 1989), pages 82-83.] Frigatebirds congregate in breeding colonies, often near colonies of other seabirds (such as cormorants, pelicans, and boobies), not infrequently mooching food collected by their avian neighbors.

God willing, the next contribution to this alphabetic series will be some more “F” birds – perhaps Finches, Frogmouths, and Fairywrens!

Meanwhile, in accordance with Psalm 119:41-48, may you and I use God’s Word, always, to connect the priorities of daily life, as we “join” with our daily opportunities to follow and glorify the Lord Jesus Christ.

One thought on ““F” is for Flamingos and Frigatebirds: “F” Birds, Part 1”