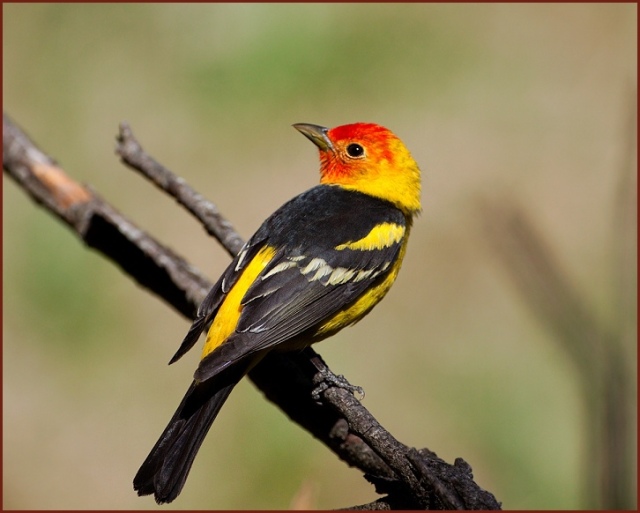 Although not as spectacularly colorful as the Painted Bunting of central and south Texas, the Western Tanager is certainly an eye-catching bird of montane forests, with showy colorfulness, especially the red-and-yellow-black-and-white male.  And like other birds, they are “precious in His (i.e., the Lord’s) sight”, although not as precious as the human race, of which the children’s song (“Jesus Loves the Little Children”) observes:

All the children of the world:

Red and yellow, black and white;

They are precious in His sight!

Jesus loves the little children of the world!

[Quoting lyrics written roughly a century ago, by C. Herbert Woolston, a Chicago pastor; actually those well-known lyrics were the refrain to a larger song that began with “Jesus calls the children dear”.]

So what about this red-and-yellow-black-and-white passerine of America’s Great West?

And the Western Tanager is truly a colorful denizen of the higher elevations.

The only U.S. tanager [since the Flame-colored Tanager is supposed to stay within Mexico, its “normal” range] with strong wing bars. Male: Yellow, with a black back, wings, and tail, two wing bars, and a red head.  The red disappears in autumn and winter. Female: Yellowish below; dull olive above, with white and yellow wing bars.  Resembles female orioles …  but the tail and sides of the face are darker, and the bill is less sharply pointed.

Mixed colors in avian plumage are beautiful to the eye, yet rainbows also are chromatically spectacular. 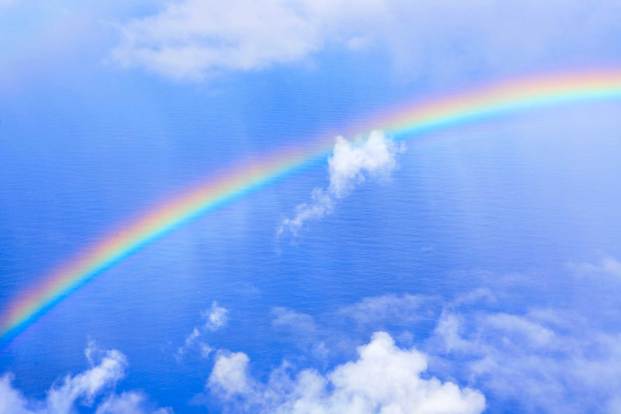 But what good are rainbows, besides being beautiful to behold? The foundational importance of the rainbow is a message from God Himself:  to remind us of a specific promise that God made to Noah, and to Noah’ family (and thus to the entire human race on this side of the worldwide Flood), and even to the air-breathing animals who survived the Flood as disembarked Arklings (and thus also to all of their direct-descendants):

That’s the true symbolism of the rainbow —  a holy promise given to Noah, a holy “preacher of righteousness” who lived both before and after the global Flood.

Interestingly, it appears that before the “fountains of the great deep” (see Genesis 7:11 — discussed at http://www.icr.org/books/defenders/196 ) broke up, making today’s volcanoes look puny by comparison, it is unlikely that rainbows were meteorologically plausible – see http://www.sound-doctrine.net/FAQ-RainBeforeFlood.html — buttressed by http://content.usatoday.com/communities/sciencefair/post/2011/07/volcanoes-may-cause-more-rain-than-realized/1#.WU12_1GQyV4 . (But that discussion must await another time and/or place.)

Obviously, any attempt to steal and transmogrify the message of the rainbow —  by those losers who foment vitriolic hate speech against God (and against His laws, and against His servants)  —  is an illegitimate and irrational blasphemy against God Himself (WHo owns and operates all rainbows), as well as an attempted fraud on His creation.

Meanwhile, many generations after Noah, another saint (i.e., another human believer whose sins are forgiven in Christ), Joseph, was given a “coat of diverse colors” (see Genesis 37:3 & 37:23 & 37:32). Joseph, of course, foreshadowed the Lord Jesus in many aspects of Joseph’s life (e.g., forsaken by his brothers, mistreated, delivered to Gentiles, falsely accused, suffering for the crime of others, not recognized by his brothers, eventually reconciling with his brothers due to his choice to forgive them, as he rescued whole populations of people who would otherwise have perished, etc.).

And, much later in Scripture, in the Apocalypse (i.e., the Revelation of the Lord Jesus Christ, given to John the Evangelist), we see the rainbow again, gloriously reminding us of future activities in world history, as God continues to operate as humanity’s) Judge (Revelation 4:3 & 10:1).

So, let your rainbow colors fly – and don’t let an enemy of God steal God’s colors on your watch!  The day will one day arrive, God knows when,  climaxing spiritual conflicts throughout human history, when it will be proven beyond genuine dispute that THE RAINBOW BELONGS TO GOD, because He said so – He called it “My covenant”, so it is His property.

So it’s a good idea to display God’s rainbow, as Answers in Genesis has recently done, in a setting that commemorated Noah’s Ark. And it is also a good idea – when watching a male Western Tanager perching on a tree-branch, or flitting about somewhere in an evergreen forest of the Rockies (during summer), to remember that timeless and wonderful truth that Pastor Woolston worded as lyrics:

All the children of the world:

Red and yellow, black and white;

They are precious in His sight!

Jesus loves the little children of the world!

2 thoughts on “Western Tanager: Red and Yellow, Black and White”