The Birdsville Track isn’t famous for its waterbirds but when we drove along it in April there had been recent rains and we were in for a few surprises. Not, happily, of the getting bogged variety, but birding ones at several spots including this one where we camped more or less in the middle of nowhere beside a small dam. That speck on the left hand side near the lone tree is my car.

As well as some Pink-eared Ducks, there were several Hoary-headed Grebes. The ones in the first and second Grebe photos are in non-breeding or immature plumage and, although they are larger than Australasian (Little) Grebes (30cm/12in versus 25cm/10in in length) you need to use subtle field marks to distinguish them in these plumages. 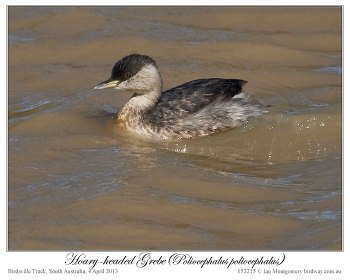 The main field marks are: the Hoary-Headed has greyish rather than rufous-tinged flanks and whiter breast (though the bird in the first Grebe photo shows that you need to be careful with stained plumage); the border between the dark cap and pale cheeks goes below rather than through the eye in the Hoary-headed Grebe and the eyes are different in colour and pattern. The Australasian Grebe has conventional-looking eyes with yellow iris while the Hoary-headed Grebe has button-like eyes with a dark iris with a white inner and a white outer ring. This is probably easier to see in the closer bird in the second Grebe photo.

It’s only when you see a bird in breeding plumage with spiky pale head feathers that you understand where it gets its unusual English name (the scientific name Poliocephalus means a much more prosaic ‘grey-headed’). ‘Hoary’ literally just means ‘whitish’ but it’s an adjective that is usually applied to frost and snow so it is used as a metaphor for ‘frosty’ in the English names of 4 or 5 bird species globally. (Another example is the Hoary or Arctic Redpoll http://www.birdway.com.au/fringillidae/hoary_redpoll/index.htm which fits better geographically.) We encountered the bird in breeding plumage about a week later at Bowra Station near Cunnamulla, SW Queensland, where we spent a few nights on the way back to Townsville.

Grebes are almost exclusively aquatic and expert divers. Their legs are set far back on the body, so they are very awkward on land which they avoid as much as possible. They build floating nests out of water plants so they just need to haul themselves out of the water to tend the eggs and the young leave the nest soon after hatching. They usually dive rather than fly to avoid predators, though they can fly long distances if necessary to find water and the Hoary-headed Grebe, commonest in southern Australia is rather a nomad in the north. It’s closest relative is the New Zealand Grebe or ‘Dabchick’ and is the only member of the genus Poliocephalus.

Looks like quite a deserted place, but those are cute little Grebes. I am glad Ian gets out and about so much there in Australia. He always finds something interesting for us to learn about. Thanks, Ian, for sharing.

I will open rivers on the bare heights, and fountains in the midst of the valleys; I will make the wilderness a pool of water, and the dry land springs of water. (Isaiah 41:18 AMP)

The Hoary-headed Grebe (Poliocephalus poliocephalus) is a member of the grebe family found in Australia and New Zealand. The bird takes its name from the silvery-white streaking on its black head. It is common in Australia, with a population of about 500,000. Its habitat is similar to that of the Australasian Grebe.

The Hoary-headed Grebe feeds on aquatic arthropods, mostly caught by deep diving. This species feeds during the day, and when the light is poor, forages mostly at the water surface.

Hoary-headed Grebes breed from August to January. The nests are a floating platform of water weeds, similar to that of the Australasian Grebe, and usually some distance out from shore among sparse reeds or other plants, anchored to and at least partly supported by them. A shallow depression on top is just slightly above water, so the eggs are lying in water or dampness. The eggs are concealed under pieces of wet vegetation when the incubating parent leaves so that the nest appears empty. Under full sun the covered eggs are warm and moist, often left unattended for some time. The egg’s appearance is oval, white, and soon stained brownish ochre, while the clutch is usually 2–5 eggs. Incubation is 20–24 days and egg size is 39 x 27 mm. (Wikipedia with editing) 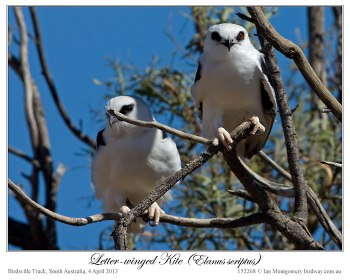 For all you patient bird of the week recipients, here is I hope a bird worth waiting for, the Letter-winged Kite, star attraction on the recent trip along the Birdsville Track in Northwestern South Australia.

The Letter-winged Kite saga that had its resolution here started in the 1970s when I was living in Surry Hills in inner city Sydney. One evening, I was walking around to the local pub, the Cricketers Arms, on Fitzroy Street a block away from busy South Dowling Street when I found a pair of Letter-winged Kites, unfazed by the traffic, landing in a small tree on the pavement. The L-shaped markings under the wing were clearly visible, so there was no doubt about the identification – I was going to the pub, not tottering home afterwards – no matter how unlikely the location for this species, usually more at home in the semi-desert of Central Australia.

I supposed at the time that they were escaped birds. I found out only later that not only are these Kites nocturnal, but that they spread far and wide in search of food from their usual, arid, home following the population crash that follows plagues of their main prey, the Long-haired Rat. Come to think of it, the rather arid open spaces of Moore Park lie on the other side of South Dowling Street, and I’m sure there are plenty of ordinary rats in Surry Hills.

Ordinary people drive the 500km of dirt road that constitutes the legendary Birdsville Track from Birdsville in Southwestern Queensland to Marree in Northeastern South Australia (and the parallel Strzelecki Track) for the experience. Birders do it to search for elusive dry country birds, particularly the Letter-winged Kite and the Grey Falcon and both of these were top of my wanted list on this trip. Letter-winged Kites roost in trees by day, so I searched the few trees – nearly all in creek beds – along the Birdsville Track until, 252km south of Birdsville I spotted a couple of suspects, screeched to a halt in a cloud of dusk and approached them in the car. Birders have 4WD vehicles, such as my modest Suzuki SZ4, mainly so that they can use them as mobile bird hides as most birds are more tolerant of vehicles than pedestrians. 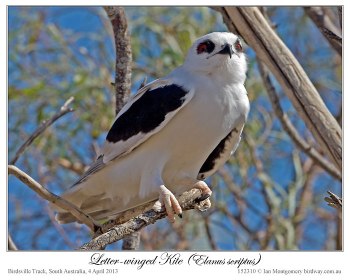 Letter-winged Kites indeed they were, but the tree was a tangle of branches and the sun was shining from behind the tree. The birds, however, seemed as unfazed by the traffic (relatively speaking) as the ones in Fitzroy Street, and let me approach to take the first photo (good lighting angle, bad branches), second photo (bad angle, good branches). Then they waited while I changed the lens from the 100-400mm to the 500mm and, eventually, looked on tolerantly while I got out of the car and did a relative close-up (third photo) and a portrait (fourth photo). 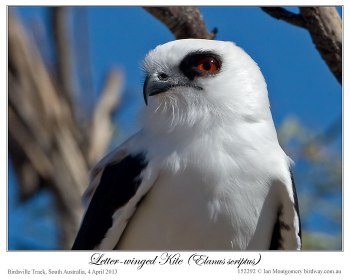 I then walked away to take a photo of the tree, the birds and a nest (I don’t know whether it was theirs) and turned around to find that they had silently vanished. If it hadn’t been for the photos definitely still on the SD card, the event might have all have been a fantasy. So I made do with a photo of the tree, the nest and the mobile bird hide, below. 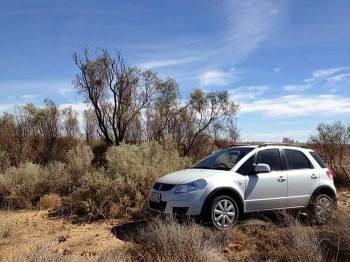 The Strzelecki Track is actually supposed to be better for Letter-winged Kites than the Birdsville, but, having found these birds, we decided to change our return travel plans from Plan B1 to Plan B2, skip the Strzelecki (similar landscape, worse road), spend a few days in the Flinders Ranges and drive home via Broken Hill, Bourke and Bowra (B2), instead of Birdsville, Bedourie and Boulia (B1).

And the glede, and the kite, and the vulture after his kind, (Deuteronomy 14:13 KJV)

What an awesome bird. They are beautiful. Thanks, Ian, for sharing another of your birdwatching adventures with us. His photography is fabulous also. I love that close-up in #4. Wow!

The Letter-winged Kite (Elanus scriptus) is a small, rare and irruptive Australian raptor with a core range in central Australia. The adult is a small and graceful, predominantly pale grey and white, raptor with black shoulders and red eyes. It is similar in appearance to the Black-shouldered Kite except for a very distinctive black underwing pattern of a shallow ‘M’ shape, seen when in flight. Roosting during the day in well-foliaged trees and hunting at night, it is the world’s only fully nocturnal raptor. Like all the elanid kites, it is a specialist predator of rodents, which it hunts by hovering in mid-air above grasslands and fields. (Wikipedia)

They belong to the Accipitridae Family . Check out all Ian’s Family Photos and then see the complete Accipitridae – Kites, Hawks and Eagles family list here.

Birds of the Bible – Glede and Kites