Great is the Lord, and greatly to be praised; and His greatness is unsearchable.  One generation shall praise Thy works to another, and shall declare Thy mighty acts.  I will speak of the glorious honor of Thy majesty, and of Thy wondrous works.   (Psalm 145:3-5)

Hiking up and down forest trails, while birdwatching at a wildlife refuge, can be an opportunity to praise God’s works to another generation – if the adventure is used to explain God’s mighty deeds to a grandchild. And the grandparent-grandchild outing need not be a “big deal”, by worldly standards, in order for it to become a treasured time that counts for eternity (Matthew 6:19-21).  Of course, God’s works include the birds He made.

The Hebrew text of Psalm 145:4 (translated “One generation shall praise Thy works to another, and shall declare Thy mighty acts”) can be translated as “Generation, unto generation, shall intensively extol Thy works and shall explain Thy mighty doings”.  Part of grandparenting, therefore, involves praising God’s works to another generation, as well as explaining God’s mighty deeds.  Since “His greatness is unsearchable”, there are countless opportunities for applying this mandate to wildlife-viewing recreation activities. 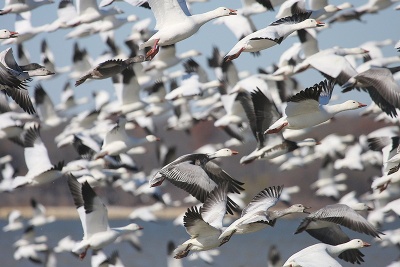 Imagine seeing an open prairie field — or a freshwater lake — covered by what looks like (from a distance) a blanket of unmelted snow – only to recognize that the “blanket” of white is actually a huge flock of migratory Snow Geese – totaling almost 4,000 in one flock, spread over two adjacent fields! 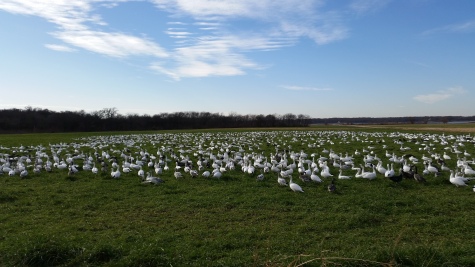 All of those, about a week ago, I saw at Hagerman National Wildlife Refuge (“Hagerman N.W.R.”) in Grayson County, Texas, a few miles west of Sherman.  Specifically, on a Wednesday (12-21-AD2016), when local schools were closed for Christmas holiday (i.e., what secularists call “winter break”), an adventure of birding and hiking was undertaken, there, by Trent (one of my grandsons) and me, after we both fueled ourselves with a generous array of Buffalo hot wings (at the WINGSTOP restaurant in nearby Sherman).

The Hagerman N.W.R. acreage (more than 11,000 acres!) is located just south of the Big Mineral Arm of Lake Texoma, the large “lake” (which is actually a lacustrine reservoir formed by the U.S. Army Corps of Engineers’ Denison Dam, built on the Red River) that separates southern Oklahoma from north Texas.  [To learn more about Hagerman N.W.R.,  (website provided by the U.S. Fish & Wildlife Service ), and Hagerman National Wildlife Refuge web article provided by Wikipedia.]

Of those birds viewed, amidst several lengthy treks along the wooded hiking trails, a few are noted below: Snow Goose, Northern Pintail, and Northern Shoveler.

Due to how God programmed Snow Goose bioengineering, no air traffic control team is needed — even though in-flight traffic occurs with lots of motion in very close quarters!

The Snow Goose is the almost-all-white “winter Texan” goose that dominated the fields of Hagerman N.W.R. when Trent and I visited that forest-blended-with-grassland earlier this month.  (In biome ecology terms, this refuge is located in a pond-pocked hilly region that transitions the Piney Woods forestland of East Texas with the prairie grasslands of Oklahoma.)

Highly gregarious throughout the year, breeding in closely-packed colonies on the Arctic tundra. …  Has well-defined migration routes to and from winter quarters.  Arrival in winter quarters [such as arrival in Texas] varies with each population, some having quite long stop-overs en route, whereas others move quickly onwards; generally, however, northward spring migration is slower than the autumn one.  Winter flocks often attain tens of thousands in coastal farmland [yet, in the case of Hagerman N.W.R., which is inland, the total winter flock is now about 4,000].  Roosts on water, swimming freely, but feeds by grazing, usually pulling out plants by roots, rather than by grazing off tops.  Mixes freely with other geese [e.g., Ross’s Goose] on winter grounds, although main portions of flocks keep separate.  Even on breeding grounds, other Arctic geese may nest in fairly close proximity and occasional wild hybrids have been recorded with such species as Ross’s [Geese], White-fronted [Geese], and Canada Geese.  …  On winter grounds resort to cultivation [e.g., Hagerman N.W.R., which is agricultural land, interspersed with deciduous forests and sprinkled here and there with traditional Texas-style “horsehead pump” oil wells], fields of sprouting corn, pasture and stubble fields in lowland coastal zones are favoured.

What a graceful duck!  Watch it glide quietly through pond-water.  What dabbler dignity!

The most plentiful duck that we saw, when we visited various parts (but not all) of Hagerman N.W.R., was the Northern Pintail, another migratory “winter Texan”.

[Quoting Jack L. Griggs, American Bird Conservancy’s Field Guide to All the Birds of North America (HarperCollins, 1997), page 33.  Other than the thousands of Snow Geese, the most common bird we saw, when we visited Hagerman N.W.R., was the Northern Pintail.  Many of these ducks were congregating in the ponded areas near “horsehead” oil pump sites.

Notice how the pair’s coloring is like a Mallard pair, but not those large spatula-like bills!

Perhaps my favorite duck, of those I’ve seen at Hagerman N.W.R., is the Northern Shoveler.  The male shoveler has an iridescent green head (like a Mallard), rusty sides (like a Ruddy Duck), a white breast, and a shovel-like (or spoon-like) bill. These ducks feed mostly “by filtering tiny aquatic insects and plants from the water’s surface with its bill”.  [Quoting Stan Tekiela, BIRDS OF TEXAS FIELD GUIDE (Adventure Publications, 2004), page 332-333.  A well-named dabbler, this duck’s bill is unlikely to be confused with any other duck. The marshy wetlands at Hagerman provide an ideal winter home for the Shoveler.

Usually found in pairs or small parties, but large concentrations form at migration stop-over waters. Indirectly mixes with other dabbling ducks, but generally keeps apart in discrete gatherings.  …  Feeds by dabbling [i.e., bobbing upside-down underwater] and sifting in shallow water, swinging bill from side to side over surface [straining wee crustaceans and seeds, as if its bill was a colander!], often immersing head and neck and sometimes up-ending; feeds chiefly while swimming, but also while wading.  Loafing birds gather on banks and shores close to feeding waters.  Swims buoyantly, with rear end high and fore parts low, the heavy bill often touching surface of water.  Walks awkwardly.  Flight fast and agile, rising suddenly from surface with whirring wings.  Most populations highly migratory, arriving on breeding grounds from mid March onwards and departing again in August.  …  Favours shallow freshwater lakes [and ponds] and marshes with areas of open water, emergent and fringe vegetation and muddy margins.

What an enjoyable day!

All in all, it was a good day to trek some birdwatching trails —  good for physical exercise, good for intellectual adventure, and good for spiritual appreciation for our great Creator-God, the almighty and majestic Provider of every form of life that lives, whether big or small.  Each minute of a nature hike is a “teachable moment” (Deuteronomy 6:6-7), for those with eyes to see. 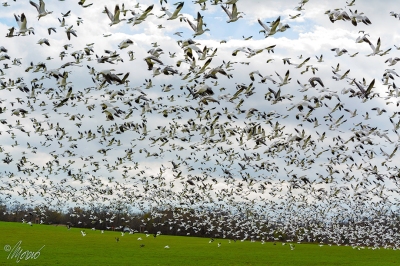 And, as part of good preparation for the outing, it was good to start the day’s recreational activities with a more-than-we-could-eat feast of WINGSTOP Buffalo hot wings, seasoned fries, and iced tea.  (Of course, we took home what we didn’t then eat, plus we took home some good memories and Trent’s photographs.)

Snow Goose flock in flight by Kim A. Sheridan:

Gregarious Snow Geese in Flight at Hagerman NWR by Moreno:

Great is the Lord, and greatly to be praised; and His greatness is unsearchable.  One generation shall praise Thy works to another, and shall declare [i.e., explain] Thy mighty acts.  I will speak of the glorious honor of Thy majesty, and of Thy wondrous works.   (Psalm 145:3-5)