Eurasian Jay: ‘Jay of the Oaks’ Admired in Finland

And Joshua wrote these words in the book of the law of God, and took a great stone, and set it up there under an oak that was by the sanctuary of the LORD.   (Joshua 24:26)

Oaks are well-known for foliage that provides shade from sunlight.  However, for birds, oak trees are probably more appreciated for their branches and their acorns – branches for nesting and perching, and acorns for eating.

One bird that loves acorns, for eating, is the Eurasian Jay (Garrulus glandarius). These jays are called Geai des chênes in French, meaning “jay of the oaks”.

For some youtube footage, showing some Eurasian Jays eating quite energetically, see  https://www.youtube.com/watch?v=Kkx2mDE4pGc  —  “Crazy Jays” by Paul Dinning), one group photo from which youtube video is shown (below). 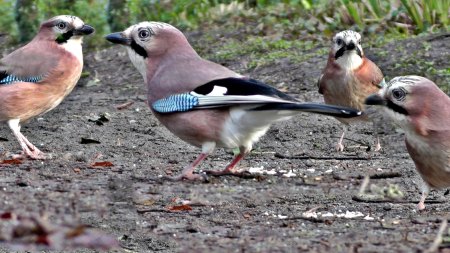 Busy, busy, busy!  There is nothing lackadaisical about how these jays hunt for food!

A fairly shy but common woodland bird seen in highest numbers in autumn; Jays shuttle between the ‘home wood’ and the district’s oak trees to gather in supplies of acorns for the winter. In longer flights the wingbeats are fluttering and the flight course slow and unsteady. Flying along a woodland edge it glides in gentle undulations. … Breeds in both deciduous and coniferous trees favouring coppice and stands of young spruce or pine trees, has also colonized parks and suburban areas. Feeds on insects, tree fruits, eggs and young of passerines etc. 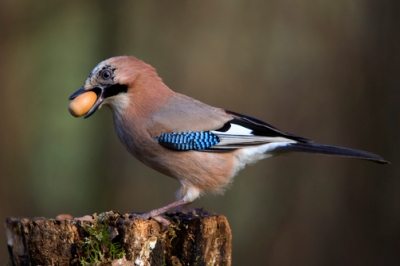 Acorns are the nuts produced by oak trees.  As seeds, they are ready for planting, capable of producing a new generation of oak trees.  Like other nuts, acorns are often eaten, by animals (including birds and squirrels) and some humans!  Nuts are even mentioned in Scripture as food worthy of cultivation, valuable enough to be used in gift-giving (see Genesis 43:11 & Song of Solomon 6:11).

On the 7th of July AD2006, in a park-like tall-treed area next to a restaurant at Haikko Manor, Finland (about 3-to-4 miles from Porvoo, on Finland’s southern coast), my wife and I watched an energetic Eurasian Jay, hopping about, foraging  –  then it decided, for a moment, to perch upon a rock.  (A passer-by took a photograph of my wife and me, just before we walked through the parking lot toward the restaurant, by which we saw the busy “Jay of the Oaks” – the Eurasian Jay.)

But when I tried to photograph the Eurasian Jay, using the same camera, it hopped sideways, flitting about, so quickly I missed getting a focus – and then it then flew away.   Was it camera-shy?  Or was it just humans-shy, regardless of any camera?  (It didn’t say.)  But busy it was, and it appeared to find a few bugs to eat, just before it flew off.

Regardless, it was fun while it lasted – watching the colorful Jay hop and hunt for acorns (and bugs), then rest briefly upon a rock, then flit away, to somewhere under the huge, dark, old-growth oak trees (mixed with occasional clusters of birch and evergreen trees) that shaded the lawn, in the garden-like area next to the Finnish restaurant.

Suffice it to say: southern Finland is stunningly, refreshingly, relaxingly beautiful, beyond words — and a wonderful, clean, marvelous, splendid,  country for birding.

The Jay of Eurasia is a permanent resident of virtually all but the northern-most parts of Europe, plus various swaths of Asia (see range map below), so it is no surprise to see one hopping sideways under shady oak trees, in a wooded park, near coastal Porvoo.

Pigeon-sized [i.e., about 13 inches long]. Colourful woodland corvid, notoriously shy and wary – generally glimpsed as a coloured bird with black tail and white rump [who] flashes through the trees, screeching its harsh warning. Typical call is a dry, rasping skaak, a familiar woodland sound. Adult: Overall pinkish-brown coloration is relieved by the beautiful shining blue shoulder patch and thick black moustache. All plumages similar. Noisy and excitable; short crest is readily erected, exposing dark streaking. Flight: Action is hesitantly undulating on broad, blunt wings; rising birds initially show black tail contrasting with white rump and wing flashes, and bright blue shoulder patches. Unlikely to be confused [with any other local bird], but compare similar-sized Hoopoe. From below, the black tail contrast with pinkish-brown body.
• Common woodland bird, but especially with oaks – acorns a favourite food
• In recent decades, has moved increasingly into towns; in many city parks, has become bold and fearless
• Feeds on ground, jauntily hopping sideways as it searches for acorns [or insects or berries, such as blackberries]
• Their long persecution by gamekeepers as an egg-thief [i.e., snatching eggs of other birds] belies their importance as a planter of forests; Jays bury acorns throughout the autumn – indeed a single Jay can plant 3,000 acorns in a month
• Rarely seen far from the shelter of trees, a party usually breaks cover one at a time, hurriedly flapping across a clearing or valley
• As well as its angry screeches, wide repertoire of calls includes a buzzard-like mewing note [as well as other calls demonstrating mimicry].

Thus, as both an eater and planter of oak-seeds (which is what acorns are), the Eurasian Jay’s behavior is not unlike that of the Pinyon Jay, which both eats and plants Pinyon Pine seeds, in America’s Great West.  [See “Providential Planting: The Pinyon Jay”, CREATION EX NIHILO, 19(3):24-25 (June 1997), posted at http://creation.com/providential-planting .] 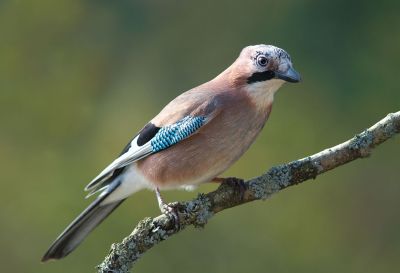 What clever birds God has made these busy woodland-dwelling corvids to be!

Who knows?  Maybe my wife and I will get to re-visit Scandinavia, sometime, for more birdwatching.  If so, I hope to see another Eurasian Jay – that colorful character that the French rightly call Geai des chênes: “jay of the oaks”.    ><>  JJSJ  profjjsj@aol.com 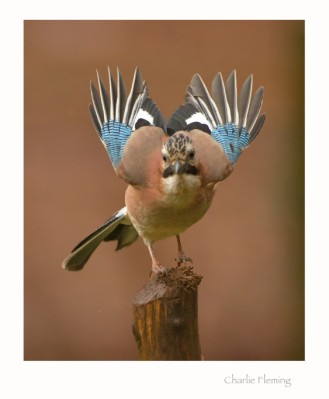