Alaskan Alcids:  Efficiently Designed by God for Flowing through Both ‘Oceans’ 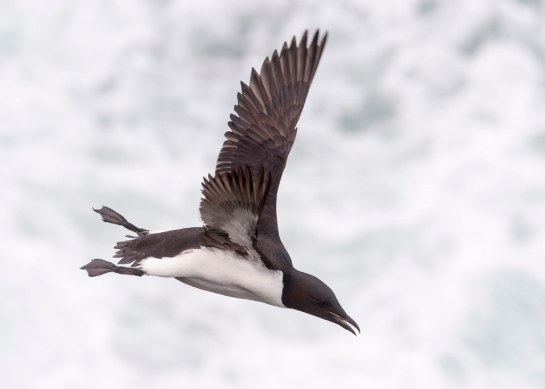 And God said, Let the waters bring forth abundantly the moving creature that hath life, and fowl that may fly above the earth in the open firmament of heaven.  And God created great whales, and every living creature that moveth, which the waters brought forth abundantly, after their kind, and every winged fowl after his kind: and God saw that it was good.  And God blessed them, saying, Be fruitful, and multiply, and fill the waters in the seas, and let fowl multiply in the earth.  (Genesis 1:20-22)

About a year ago (specifically, July 19th AD2019), this writer saw–for the first time–Atlantic puffins in the wild.  These cute clown-faced alcids were flying near (and sometimes resting upon) the cliff-dominated isle of Staffa, often plunging into coastal waters for fish.  That privileged birdwatching experience is reported on this blogsite at  “Birdwatching at Staffa, Near Iona:  Puffins, Shags, and Herring Gulls” [posted at https://leesbird.com/2019/07/22/birdwatching-at-staffa-puffins-shags-more/ ].

In this blogpost, however, it is alcids near the coastal waters of Alaska (and thus the northern Pacific Ocean) that are the subject of our attention.

Recent research, on the flying behavior of Alaskan alcids—auk-like birds (such as murres, guillemots, and puffins)—shows how Earth has two kinds of fluid-filled “oceans”, the liquid ocean of sea-water and the gaseous “ocean” of air.(1),(2),(3)

The study reveals that these birds, from the Alcidae family which includes puffins, murres and their relatives, produce efficient propulsive wakes while flying and swimming. This means that the animals likely spend relatively low amounts of metabolic energy when creating the force [that] they need to move in both air and water.(1)

Maybe you don’t think of Earth’s atmosphere as an “ocean” of air, but a creation science pioneer, Matthew Maury, did. In fact, Maury is famous for his scientific breakthroughs in oceanography, which analyzes ocean sea-water dynamics—and also in meteorology, which analyzes atmospheric dynamics.(3)

The two oceans of air and water. Our planet is invested with two great oceans; one visible, the other invisible; one underfoot, the other overhead; one entirely envelopes it, the other covers about two-thirds of its surface. All the water of the one weighs about 400 times as much as all the air of the other.(3)

It’s all about fluid mechanics, including avian applications for efficient motions inside both “oceans”. The study included videographic documentation of flying, diving, and swimming by murres, guillemots, and puffins.

Study animals were common murres (Uria aalge, Pontoppidan 1763), pigeon guillemots (Cepphus Columba, Pallas 1811), horned puffins (Fratercula corniculata, Naumann 1821), and tufted puffins (Fratercula corniculate, Pallas 1769). Filming of aquatic flight was performed at the Alaska SeaLife Center in Seward, Alaska. … At the time of this study, the exhibit contained 12 horned puffins, 10 tufted puffins, 4 pigeon guillemots, and 6 common murres. Individuals of each species of alcid regularly swam past the viewing window. … Given the clear contrasts between these two behaviors, we differentiate between horizontal (trajectory <10 deg) and descending aquatic flight (trajectory >20 deg). The birds swam on their own volition and selected their own swimming speeds and descent angles. Videos of aquatic flight of all four species were taken ….(2)

But would evolution predict that alcids are fitted for such efficiency?

Birds that use their wings for ‘flight’ in both air and water are expected to fly poorly in each fluid relative to single-fluid specialists; that is, these jacks-of-all-trades should be the masters of none.(2)

But the evolutionists guessed wrong when they suspected that these Alsakan alcids would be inefficient when moving in both fluid “oceans”.

Alcids exhibit exceptional dive performance while retaining aerial flight. We hypothesized that alcids maintain efficient Strouhal numbers and stroke velocities across air and water, allowing them to mitigate the costs of their ‘fluid generalism’. We show that alcids cruise at Strouhal numbers between 0.10 and 0.40 – on par with single-fluid specialists – in both air and water but flap their wings ~ 50% slower in water. Thus, these species either contract their muscles at inefficient velocities or maintain a two-geared muscle system, highlighting a clear cost to using the same morphology for locomotion in two fluids. Additionally, alcids varied stroke-plane angle between air and water and chord angle during aquatic flight, expanding their performance envelope.(2)

Thus, because God designed alcids to move in both fluids—liquid sea-water and gaseous air currents—God brilliantly programmed how they move in those two fluid environments.(4)

This mobile efficiency surprises evolutionists, but not Biblical creationists.

Interestingly, birds in the family Alcidae (puffins, murres, and their relatives) seem to contradict the notion of a trade-off between aerial and aquatic flight performance.(2)

Biomechanics is the field of biology that studies the action of internal and external forces on the living body, especially the skeletal system. Also called bioengineering, this fascinating area analyzes biological design and the physical forces associated with humans and animals. If ever there was evidence for creation on a macroscopic scale (Romans 1:20), it would be the vast array of creatures all over the world marvelously designed to move in and fill their environments based on these amazing design features.(8)

In fact, long ago, the Scriptures mentioned the magnificent ability of birds to fly, taking advantage of flowing air currents according to their availability.(5)

It should never surprise Christians to learn that God has carefully and caringly designed and bioengineered birds (including cute little alcids like puffins, murres, adn guillemots!)—all over the world—to fit and to fill their respective habitats, even in this fallen world.

Also it should not surprise Christians when evolutionists fail to give God credit for His handiwork—because not having “eyes to see” God’s Creatorship, evolutionists routinely imagine optimized biological behaviors (like alcids swimming, diving, and flying) as accidental products of “evolution”—as if merely using the word “evolution” somehow justifies believing that blind mindless luck did it all.(6),(7)