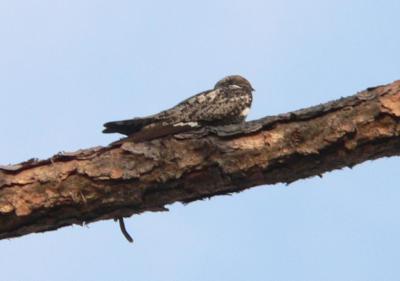 The Night Hawk is part of the Caprimulgidae – Nightjars family. Here in North America, the Lesser, Common, and Antillean Nighthawks, are joined by the Common Pauraque, Common Poorwill, Chuck-Will’s Widow, and the Whip-Poor-Will to round out the family. They have long wings, short legs, and very small bills with a large mouth. All of these are late evening, early morning, and night hunters of insects. God created them with coloration that helps them blend in with the tree or leaves around them and most perch horizontal to the limbs instead of across them like most birds. This also helps hide them in the daytime. Even though they have the name “Hawk”, they do not resemble what most would think of hawks. The term is more of the fact of ‘hawking or catching” insects while in flight. Most fly low over the ground in search the moths and large flying insects. They range from 7 to 13 inches long with wingspans from 11 to 24 inches.

UPDATE: AUG 30, 2008: Upon further investigation, the night hawk mentioned in the verses is most likely a type of owl that feeds at night. I will make a new article soon. Enjoy this anyway. (Lee)

They are again in our list of birds that are “unclean.” Both verses are identical in the KJV.

One thought on “Birds of the Bible – Nighthawk”