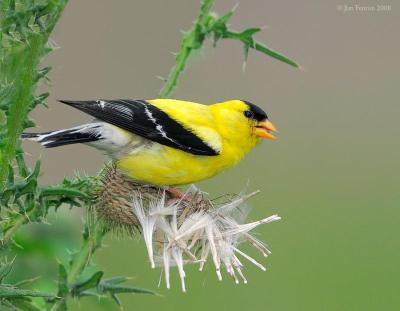 The Gorgeous Goldfinch ~ from The Curious Book of Birds

HE Goldfinch who lives in Europe is one of the gaudiest of the little feathered brothers. He is a very Joseph of birds in his coat of many colors, and folk often wonder how he came to have feathers so much more gorgeous than his kindred. But after you have read this tale you will wonder no longer.

You must know that when the Father first made all the birds they were dressed alike in plumage of sober gray. But this dull uniform pleased Him no more than it did the birds themselves, who begged that they might wear each the particular style which was most becoming, and by which they could be recognized afar.

So the Father called the birds to Him, one by one, as they stood in line, and dipping His brush in the rainbow color-box painted each appropriately in the colors which it wears to-day. (Except, indeed, that some had later adventures which altered their original hues, as you shall hear in due season.)

But the Goldfinch did not come with the other birds. That tardy little fellow was busy elsewhere on his own affairs and heeded not the Father’s command to fall in line and wait his turn for being made beautiful.

So it happened that not until the painting was finished and all the birds had flown away to admire themselves in the water-mirrors of the earth, did the Goldfinch present himself at the Father’s feet out of breath.

“O Father!” he panted, “I am late. But I was so busy! Pray forgive me and permit me to have a pretty coat like the others.”

“You are late indeed,” said the Father reproachfully, “and all the coloring has been done. You should have come when I bade you. Do you not know that it is the prompt bird who fares best? My rainbow color-box has been generously used, and I have but little of each tint left. Yet I will paint you with the colors that I have, and if the result be ill you have only yourself to blame.”

The Father smiled gently as He took up the brush which He had laid down, and dipped it in the first color which came to hand. This He used until there was no more, when He began with another shade, and so continued until the Goldfinch was completely colored from head to foot. Such a gorgeous coat! His forehead and throat were of the most brilliant crimson. His cap and sailor collar were black. His back was brown and yellow, his breast white, his wings golden set off with velvet black, and his tail was black with white-tipped feathers. Certainly there was no danger of his being mistaken for any other bird.

When the Goldfinch looked down into a pool and saw the reflection of his gorgeous coat, he burst out into a song of joy. “I like it, oh, I like it!” he warbled, and his song was very sweet. “Oh, I am glad that I was late, indeed I am, dear Father!”

But the kind Father sighed and shook His head as He put away the brush, exclaiming, “Poor little Goldfinch! You are indeed a beautiful bird. But I fear that the gorgeous coat which you wear, and which is the best that I could give you, because you came so late, will cause you more sorrow than joy. Because of it you will be chased and captured and kept in captivity; and your life will be spent in mourning for the days when you were a plain gray bird.”

And so it happened. For to this day the Goldfinch is persecuted by human folk who admire his wonderful plumage and his beautiful song. He is kept captive in a cage, while his less gorgeous brothers fly freely in the beautiful world out of doors. 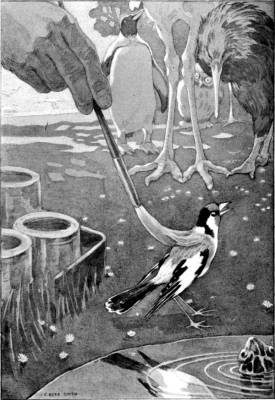 Such a gorgeous coat!

Such a gorgeous coat!

Then God said, “Let the waters abound with an abundance of living creatures, and let birds fly above the earth across the face of the firmament of the heavens.” So God created great sea creatures and every living thing that moves, with which the waters abounded, according to their kind, and every winged bird according to its kind. And God saw that it was good. And God blessed them, saying, “Be fruitful and multiply, and fill the waters in the seas, and let birds multiply on the earth.” So the evening and the morning were the fifth day. (Genesis 1:20-23 NKJV)

This is the first story to be published here from the Curious Book of Birds by Abbie Farwell Brown. This was published in 1903 and is in the public domain. The stories are cute and enjoyable to read. They will be under “From the Past” authors. 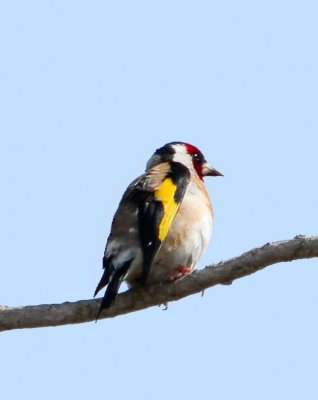