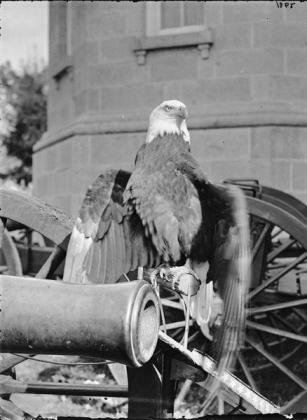 LD ABE” was the live war Eagle which accompanied the Eighth Wisconsin regiment during the War of the Rebellion. Much of a more or less problematical character has been written about him, but what we regard as authentic we shall present in this article. Old Abe was a fine specimen of the Bald Eagle, very like the one figured in this number of Birds. Various stories are told of his capture, but the most trustworthy account is that Chief Sky, a Chippewa Indian, took him from the nest while an Eaglet. The nest was found on a pine tree in the Chippewa country, about three miles from the mouth of the Flambeau, near some rapids in the river. He and another Indian cut the tree down, and, amid the menaces of the parent birds, secured two young Eagles about the size of Prairie Hens. One of them died. The other, which lived to become historical, was sold to Daniel McCann for a bushel of corn. McCann carried it to Eau Claire, and presented it to a company then being organized as a part of the Eighth Wisconsin Infantry.

What more appropriate emblem than the American Bald-headed Bird could have been thus selected by the patriots who composed this regiment of freemen! The Golden Eagle (of which we shall hereafter present a splendid specimen,) with extended wings, was the ensign of the Persian monarchs, long before it was adopted by the Romans. And the Persians borrowed the symbol from the Assyrians. In fact, the symbolical use of the Eagle is of very remote antiquity. It was the insignia of Egypt, of the Etruscans, was the sacred bird of the Hindoos, and of the Greeks, who connected him with Zeus, their supreme deity. With the Scandinavians the Eagle is the bird of wisdom. The double-headed Eagle was in use among the Byzantine emperors, “to indicate their claims to the empire of both the east and the west.” It was adopted in the 14th century by the German emperors. The arms of Prussia were distinguished by the Black Eagle, and those of Poland by the White. The great Napoleon adopted it as the emblem of Imperial France.

Old Abe was called by the soldiers the “new recruit from Chippewa,” and sworn into the service of the United States by encircling his neck with red, white, and blue ribbons, and by placing on his breast a rosette of colors, after which he was carried by the regiment into every engagement in which it participated, perched upon a shield in the shape of a heart. A few inches above the shield was a grooved crosspiece for the Eagle to rest upon, on either end of which were three arrows. When in line Old Abe was always carried on the left of the color bearer, in the van of the regiment. The color bearer wore a belt to which was attached a socket for the end of the staff, which was about five feet in length. Thus the Eagle was high above the bearer’s head, in plain sight of the column. A ring of leather was fastened to one of the Eagle’s legs to which was connected a strong hemp cord about twenty feet long.

Old Abe was the hero of about twenty-five battles, and as many skirmishes. Remarkable as it may appear, not one bearer of the flag, or of the Eagle, always shining marks for the enemy’s rifles, was ever shot down. Once or twice Old Abe suffered the loss of a few feathers, but he was never wounded.

The great bird enjoyed the excitement of carnage. In battle he flapped his wings, his eyes blazed, and with piercing screams, which arose above the noise of the conflict, seemed to urge the company on to deeds of valor.

David McLane, who was the first color bearer to carry him into battle, said:

“Old Abe, like all old soldiers, seemed to dread the sound of musketry but with the roll of artillery he appeared to be in his glory. Then he screamed, spread his wings at every discharge, and reveled in the roar and smoke of the big guns.” A correspondent who watched him closely said that when a battle had fairly begun Old Abe jumped up and down on his perch with such wild and fearful screams as an eagle alone can utter. The louder the battle, the fiercer and wilder were his screams.

Old Abe varied his voice in accord with his emotions. When surprised he whistled a wild melody of a melancholy softness; when hovering over his food he gave a spiteful chuckle; when pleased to see an old friend he seemed to say: “How do you do?” with a plaintive cooing. In battle his scream was wild and commanding, a succession of five or six notes with a startling trill that was inspiring to the soldiers. Strangers could not approach or touch him with safety, though members of the regiment who treated him with kindness were cordially recognized by him. Old Abe had his particular friends, as well as some whom he regarded as his enemies. There were men in the company whom he would not permit to approach him. He would fly at and tear them with his beak and talons. But he would never fight his bearer. He knew his own regiment from every other, would always accompany its cheer, and never that of any other regiment.

Old Abe more than once escaped, but was always lured by food to return. He never seemed disposed to depart to the blue empyrean, his ancestral home.

Having served three years, a portion of the members of Company C were mustered out, and Old Abe was presented to the state of Wisconsin. For many years, on occasions of public exercise or review, like other illustrious veterans, he excited in parade universal and enthusiastic attention.

He occupied pleasant quarters in the State Capitol at Madison, Wisconsin, until his death at an advanced age. 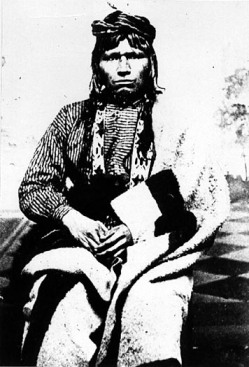 Here’s some information from Wikipedia about Old Abe:

Old Abe (1861? – March 28, 1881), a bald eagle, was the mascot of the 8th Wisconsin Volunteer Infantry Regiment in the American Civil War. Later, her image was adopted as the eagle appearing on a globe in Case Corporation’s logo and as the screaming eagle on the insignia of the U.S. Army’s 101st Airborne Division.

To capture the eagle, Chief Sky cut down a tree in which two fledgling eagles were nesting. One eaglet died from the fall, but the other became the young indian’s pet. After a few weeks, Chief Sky went on an expedition with his father, during which the eagle was traded for a bushel of corn to Daniel McCann, who lived in Eagle Point.

Soon after its formation, McCann offered to sell the eagle to the Badgers, for $2.50. In his “History of Old Abe”, published in 1865, Joseph 0. Barrett, who helped McCann to bring the eagle to Eau Claire, gave a description of the transaction, which can be paraphrased as:

“Will you buy my Eagle,” said McCann, “only two dollars and a half?”

He also solicited a contribution from a civilian, S. M. Jeffers, but was rebuffed. When the soldiers heard of this, they accosted Jeffers, and gave him three lusty groans. When he understood that they were protesting against his reluctance to help buy the eagle, Jeffers laughed, paid for the bird with a Quarter Eagle and presented her to the Company. After that, he had cheers instead of groans. The quarters were returned to the donors.

In September 1861, the Badgers went to Madison, where they joined the 8th Wisconsin Volunteer Infantry Regiment as Company C. They became the the regimental color company and were given the name “Eagle Company”. The regiment also became the “Eagle Regiment”. After Captain Perkins named the eagle after President Abraham Lincoln, soldiers of Company C designed a special perch on which they carried the bird into battle.

Old Abe participated in the Second Battle of Corinth (in which the 8th Wisconsin lost half of its men) and the Siege of Vicksburg, among other battles. In battle, Old Abe quickly became legendary, screaming and spreading her wings at the enemy. Confederate troops called her the “Yankee Buzzard” and made several attempts to capture her but never succeeded. Several times she lost feathers to bullets and saw her handlers get shot out from under her. When passing by, Generals Ulysses S. Grant, William T. Sherman, and William Rosecrans were known to doff their hats to the eagle. 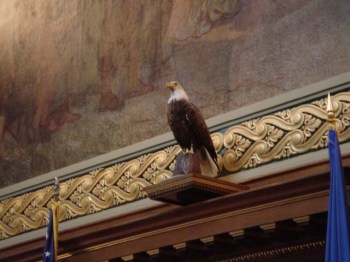 Old Abe was present at numerous battles and lesser engagements during the war:

Next Article – The American Osprey

The Previous Article – The Snowy Heron