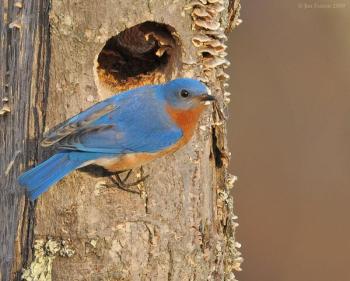 As far as I know, the only Version of the Bible (English) that used the word “bluebirds is the Message. It is not a version I use, but that verse makes for chance to write about the Bluebirds. In many of the other versions, “Thrush” is used. Bluebirds are in the Turdidae – Thrushes Family. There are three species; the Eastern, Western and Mountain Bluebirds. In a completely different family, the Irenidae – Fairy-bluebirds Family you will find the Asian and Philippine Fairy-bluebirds. These are not “thrushes” per se.

This verse has been written about in Birds of the Bible – Thrush and Thrushes II. It mentions that the birds know more about migration than the people know that much about God and His dominion.

So, not so sure that was a good choice of birds to use especially since they aren’t even anywhere near the Middle East. Nevertheless they are beautiful birds that the Lord has created for His pleasure and our enjoyment. The majority of their diet is “insects and other invertebrates. The remainder of the bird’s diet is made up of wild fruits. Favored insect foods include grasshoppers, crickets, katydids, and beetles. Other food items include earthworms, spiders, millipedes, centipedes, sow bugs and snails. (Eastern) Bluebirds are very helpful with pest control in the territory surrounding the nest.”

All three of them are cavity dwellers or nest box residents. They are all territorial and “Bluebirds can typically produce between two and four broods during the spring and summer (March through August in the Northeastern United States). Males identify potential nest sites and try to attract prospective female mates to those nesting sites with special behaviors that include singing and flapping wings, and then placing some material in a nesting box or cavity. If the female accepts the male and the nesting site, she alone builds the nest and incubates the eggs.”

“The bluebirds are a group of medium-sized, mostly insectivorous or omnivorous birds in the genus Sialia of the thrush family (Turdidae). Bluebirds are one of the few thrush genera in the Americas. They have blue, or blue and red, plumage. Female birds are less brightly colored than males, although color patterns are similar and there is no noticeable difference in size between sexes.

I know all the birds of the hills, and all that moves in the field is mine. (Psalms 50:11 ESV)

Birds of the Bible – Thrushes

6 thoughts on “Birds of the Bible – Bluebirds”