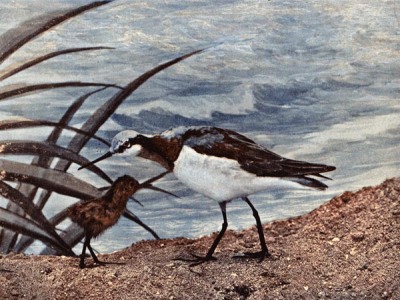 ERHAPS the most interesting, as it is certainly the most uncommon, characteristic of this species of birds is that the male relieves his mate from all domestic duties except the laying of the eggs. He usually chooses a thin tuft of grass on a level spot, but often in an open place concealed by only a few straggling blades. He scratches a shallow depression in the soft earth, lines it with a thin layer of fragments of old grass blades, upon which the eggs, three or four, are laid about the last of May or first of June. Owing to the low situation in which the nest is placed, the first set of eggs are often destroyed by a heavy fall of rain causing the water to rise so as to submerge the nest. The instinct of self preservation in these birds, as in many others, seems lacking in this respect. A second set, numbering two or three, is often deposited in a depression scratched in the ground, as at first, but with no sign of any lining.

Wilson’s Phalarope is exclusively an American bird, more common in the interior than along the sea coast. The older ornithologists knew little of it. It is now known to breed in northern Illinois, Iowa, Wisconsin, Minnesota, the Dakotas, Utah, and Oregon. It is recorded as a summer resident in northern Indiana and in western Kansas. Mr. E. W. Nelson states that it is the most common species in northern Illinois, frequenting grassy marshes and low prairies, and is not exceeded in numbers even by the ever-present Spotted Sandpiper. While it was one of our most common birds in the Calumet region it is now becoming scarce.

The adult female of this beautiful species is by far the handsomest of the small waders. The breeding plumage is much brighter and richer than that of the male, another peculiar characteristic, and the male alone possesses the naked abdomen. The female always remains near the nest while he is sitting, and shows great solicitude upon the approach of an intruder. The adults assume the winter plumage during July. 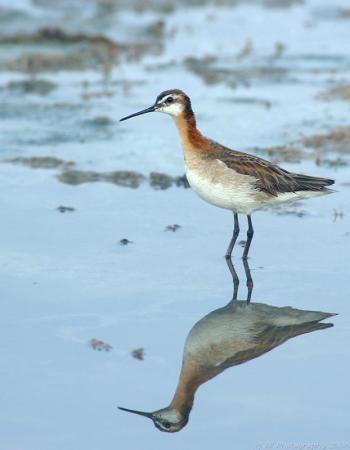 Out of the ground the LORD God formed every beast of the field and every bird of the air, and brought them to Adam to see what he would call them. And whatever Adam called each living creature, that was its name. So Adam gave names to all cattle, to the birds of the air, and to every beast of the field. But for Adam there was not found a helper comparable to him. (Genesis 2:19-20 NKJV)

What another fantastically created bird. The Phalaropes belong to the Scolopacidae – Sandpipers, Snipes family. There are 96 species in the family, with 3 of those in the Phalaropus genus; the Wilson’s, Red-necked and Red Phalaropes. Phalarope are sometimes called “wadepipers.” They are especially notable for two things: their unusual nesting behavior (see above), and their unique feeding technique. When feeding, a phalarope will often swim in a small, rapid circle, forming a small whirlpool. This behavior is thought to aid feeding by raising food from the bottom of shallow water. The bird will reach into the center of the vortex with its bill, plucking small insects or crustaceans caught up therein.

The Wilson’s Phalarope, Phalaropus tricolor, is a small wader. This bird, the largest of the phalaropes, breeds in the prairies of North America in western Canada and the western United States. It is migratory, wintering around the central Andes in South America. They are passage migrants through Central America around March/April and again during September/October. The species is a rare vagrant to western Europe.

This species is often very tame and approachable. Its common name commemorates the American ornithologist Alexander Wilson. Sometimes, it is placed in a monotypic genus Steganopus. 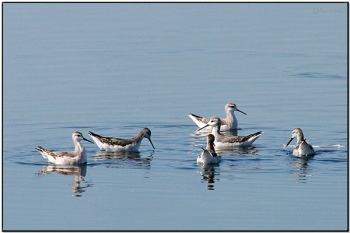 Wilson’s Phalarope is slightly larger than the Red Phalarope at about 9.1 in (23 cm) in length. As are all 3 phalaropes, it is a unique, dainty shorebird with lobed toes and a straight fine black bill. The breeding female is predominantly gray and brown above, with white underparts, a reddish neck and reddish flank patches. The breeding male is a duller version of the female, with a brown back, and the reddish patches reduced or absent. In a study of breeding phalaropes in Saskatchewan Providence in Canada, females were found to average around 10% larger in standard measurements and to weigh around 30% more than the males. Females weighed from 68 to 79 g (2.4 to 2.8 oz), whereas the males average 1.83 oz (51.8 g).

Young birds are grey and brown above, with whitish underparts and a dark patch through the eye. In winter, the plumage is essentially grey above and white below, but the dark eyepatch is always present.

Next Article – The Evening Grosbeak

The Previous Article – The Skylark