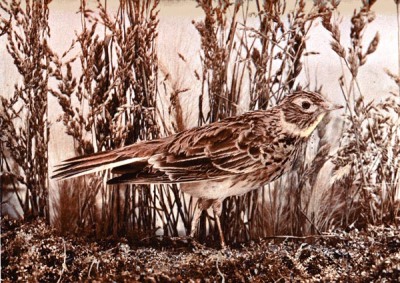 This is not an American bird. I have allowed his picture to be taken and placed here because so many of our English friends desired it.

The skylark is probably the most noted of birds in Europe. He is found in all of the countries of Europe, but England seems to claim it. Here it stays during the summer, and goes south in the winter.

Like our own Meadow Lark, he likes best to stay in the fields. Here you will find it when not on the wing.

Early in the spring the Skylark begins his song, and he may be heard for most of the year.

Sometimes he sings while on the ground, but usually it is while he is soaring far above us.

Skylarks do not often seek the company of persons. There are some birds, you know, that seem happy only when they are near people. Of course, they are somewhat shy, but as a rule they prefer to be near people. While the Skylark does not seek to be near persons, yet it is not afraid of them.

A gentleman, while riding through the country, was surprised to see a Skylark perch on his saddle. When he tried to touch it, the Lark moved along on the horse’s back, and finally dropped under the horse’s feet. Here it seemed to hide. The rider, looking up, saw a hawk flying about. This explained the cause of the skylark’s strange actions.

A pair of these Larks had built their nest in a meadow. When the time came for mowing the grass, the little ones were not large enough to leave the nest. The mother bird laid herself flat on the ground, with her wings spread out. The father bird took one of the little ones from the nest and placed it on the mother’s back. She flew away, took the baby bird to a safe place, and came back for another.

This time the father took his turn. In this way they carried the little ones to a safe place before the mowers came.

Like our Meadow Lark, the Skylark builds her nest on the ground—never in bushes or trees. Usually it is built in a hole below the surface of the ground. It is for this reason that it is hard to find.

Then, too, the color of the nest is much like that of the ground.

Four or five eggs are usually laid, and in two weeks the little larks crack the shells, and come into the world crying for worms and bugs. 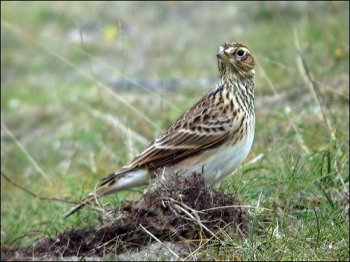 HE English Skylark has been more celebrated in poetry than any other song-bird. Shelley’s famous poem is too long to quote and too symmetrical to present in fragmentary form. It is almost as musical as the sweet singer itself.

“By the first streak of dawn,” says one familiar with the Skylark, “he bounds from the dripping herbage, and on fluttering wings mounts the air for a few feet ere giving forth his cheery notes. Then upward, apparently without effort he sails, sometimes drifting far away as he ascends, borne as it were by the ascending vapors, so easily he mounts the air. His notes are so pure and sweet, and yet so loud and varied withal, that when they first disturb the air of early morning all the other little feathered tenants of the fields and hedgerows seem irresistibly compelled to join him in filling the air with melody. Upwards, ever upwards, he mounts, until like a speck in the highest ether he appears motionless; yet still his notes are heard, lovely in their faintness, now gradually growing louder and louder as he descends, until within a few yards of the earth they cease, and he drops like a fragment hurled from above into the herbage, or flits about it for a short distance ere alighting.” The Lark sings just as richly on the ground as when on quivering wing. When in song he is said to be a good guide to the weather, for whenever we see him rise into the air, despite the gloomy looks of an overcast sky, fine weather is invariably at hand.

The nest is most frequently in the grass fields, sometimes amongst the young corn, or in places little frequented. It is made of dry grass and moss, and lined with fibrous roots and a little horse hair. The eggs, usually four or five in number, are dull white, spotted, clouded, and blotched over the entire surface with brownish green. The female Lark, says Dixon, like all ground birds, is a very close sitter, remaining faithful to her charge. She regains her nest by dropping to the ground a hundred yards or more from its concealment.

The food of the Lark is varied,—in spring and summer, insects and their larvae, and worms and slugs, in autumn and winter, seeds.

Olive Thorne Miller tells this pretty anecdote of a Skylark which she emancipated from a bird store: “I bought the skylark, though I did not want him. I spared no pains to make the stranger happy. I procured a beautiful sod of uncut fresh grass, of which he at once took possession, crouching or sitting low among the stems, and looking most bewitching. He seemed contented, and uttered no more that appealing cry, but he did not show much intelligence. His cage had a broad base behind which he delighted to hide, and for hours as I sat in the room I could see nothing of him, although I would hear him stirring about. If I rose from my seat he was instantly on the alert, and stretched his head up to look over at me. I tried to get a better view of him by hanging a small mirror at an angle over his cage, but he was so much frightened by it that I removed it.”

“This bird,” Mrs. Miller says “never seemed to know enough to go home. Even when very hungry he would stand before his wide open door, where one step would take him into his beloved grass thicket, and yet that one step he would not take. When his hunger became intolerable he ran around the room, circled about his cage, looking in, recognizing his food dishes, and trying eagerly to get between the wires to reach them; and yet when he came before the open door he would stand and gaze, but never go in. After five months’ trial, during which he displayed no particular intelligence, and never learned to enter his cage, he passed out of the bird room, but not into a store.” 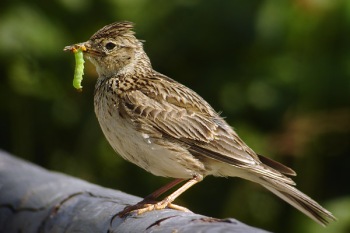 Don’t be afraid, land; rejoice and be glad, for the LORD has done great things. Don’t be afraid, wild animals, for the wilderness pastures have turned green, the trees bear their fruit, and the fig tree and grapevine yield their riches. (Joel 2:21-22 HCSB)

Skylarks are in the Alauda genus of the Alaudidae – Larks Family.

The Eurasian Skylark (Alauda arvensis) is a small passerine bird species. This lark breeds across most of Europe and Asia and in the mountains of north Africa. It is mainly resident in the west of its range, but eastern populations are more migratory, moving further south in winter. Even in the milder west of its range, many birds move to lowlands and the coast in winter. Asian birds appear as vagrants in Alaska; this bird has also been introduced in Hawaii, western North America, eastern Australia and New Zealand.

The Eurasian Skylark is 16 to 18 centimetres long. It is a bird of open farmland and heath, known throughout its range for the song of the male, which is delivered in hovering flight from heights of 50 to 100 m, when the singing bird may appear as just a dot in the sky from the ground. The song generally lasts two to three minutes, but it tends to last longer later in the mating season. The male has broader wings than the female. This adaptation for more efficient hovering flight may have evolved because of female Eurasian Skylarks’ preference for males that sing and hover for longer periods and so demonstrate that they are likely to have good overall fitness.

Like most other larks, the Eurasian Skylark is a rather dull-looking species on the ground, being mainly brown above and paler below. It has a short blunt crest on the head, which can be raised and lowered. In flight it shows a short tail and short broad wings. The tail and the rear edge of the wings are edged with white, which are visible when the bird is flying away, but not if it is heading towards the observer. The Eurasian Skylark has sturdy legs and spends much time on the ground foraging for seeds, supplemented with insects in the breeding season.

The Eurasian Skylark makes a grass nest on the ground, hidden amongst vegetation. It is sometimes found nesting in bracken, using it for cover. Generally the nests are very difficult to find. Three to six eggs are laid in June. A second or third brood may be started later in the year. The eggs are yellow/white with brownish/purple spots mainly at the large end. (Wikipedia) 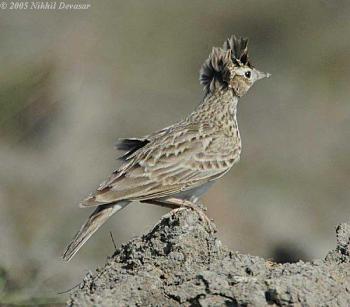 There is also the Oriental Skylark (Alauda gulgula), also known as the Oriental Lark or Small Skylark, is a species of skylark found in the Indian Subcontinent and Southeast Asia. Like other skylarks, it is found in open grassland – often near waterbodies – where it feeds on seeds and insects.

These skylarks frequently rocket up into the sky, fluttering and singing before descending down to earth. Male Oriental Skylarks may also hover in the air and sing, in order to attract a mate.

Oriental Skylarks are about 16 cm long. They have streaked, yellow-brown upper plumage, with white outer tail feathers and a short crest. Both sexes are similar. (Wikipedia)

The Previous Article – The Yellow Legs